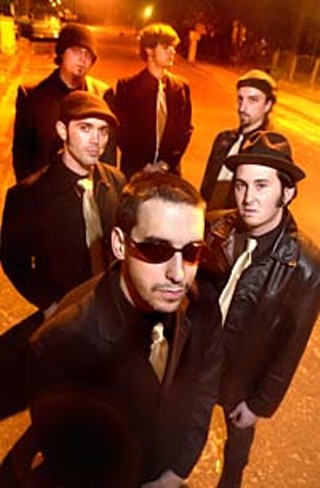 The Stingers know they don't fit in.

These days "ska" means Goldfinger, Sublime, and the Mighty Mighty Bosstones, and that's if anyone's thinking about ska at all. It's been at least one music revolution since Rancid and Reel Big Fish were on the radio, and Dropkick Murphys are too House of Pain. The electro-New Wave hybrid of No Doubt's latest disc, Rock Steady, retains a faint Jamaican accent but finds little room for skanking in its synth-rocking boogaloo. All this leaves the Stingers, more in line with Don Drummond's Skatalites, circa 1962, in a somewhat precarious position.

"To someone that doesn't know ska started in the early Sixties, it's hard to say, 'We play traditional ska,' because they don't have an idea what that means," shrugs Stinger singer Miguel Harvey.

Funnier still is that these six sharp-dressed men wound up playing ska almost by accident. None of the players in the current lineup had much, if any, previous experience with ska. Yet they do it well enough to have landed a deal with Germany's Grover Records, one of the most respected labels in the industry and the home of genre legends like Desmond Dekker and Laurel Aitken. The group's first European tour late last year went so well that they've been asked to return at the end of this summer as Aitken's backing band. This Good Thing, their 2003 Grover debut, is available now at all your favorite local record stores.

The two newest Stingers are baby-faced bassist Willy Camero, 26, late of garage-blues heavyweights the Hard Feelings, and bearded, married drummer Pat Kelly, 23, former timekeeper for Houston's Los Skarnales who lives in Space City and divides his time between the Stingers and H-Town's Sound Patrol. Both have been members for less than a year. The man most responsible for the Stingers' existence? He's no longer with the group.

"If it wasn't for him fucking around in Mars [Music], this band would not be together," states Meyers unequivocally.

"Him" is Walter Dunn, former ROTC student, self-promoter extraordinaire, and instigator of the Stingers. Onstage, Dunn had the hyperbolic charisma and dimensions of the Happy Mondays' Bez or the E Street Band's Clarence Clemons, but it wasn't at a club where he first came to Meyers' attention.

"He was sitting by the amps like every guy that walks in there and decides to play loud and annoy the fuck out of you," says the guitarist, who began working at the now-closed Hancock Center Mars Music superstore soon after his move to Austin in 1998. "Except his stuff wasn't annoying."

Bonding over Toots & the Maytals and Desmond Dekker, Dunn and Meyers were soon busking on the street and booking gigs as the Soul Stingers. After a tryout at the Black Cat, Dunn asked Harvey, then playing drums in another of his bands, to come try some backup vocals. This he failed to tell Meyers.

"I worked so fuckin' hard on singing the harmonies and playing at the same time," Meyers swears. "And I show up at the gig, and he's like, 'Hey, there's Miguel. He's going to be singing the harmonies.' I'm like, 'Fuck that guy. I worked my ass off. Who is this weasel?'"

"It wasn't just Johnny," insists Harvey as the rest of the Stingers collapse into laughter. "Everyone totally hated me at first. We're still working through those issues."

Meanwhile, Meyers became acquainted with Pestorius at a Cactus Cafe show that "coincided with Zuckerman breaking up," according to the then-bassist. After seeing the Soul Stingers at a party, Pestorius wanted in and convinced the then-acoustic band to go electric. Electricity, as in flying sparks, came close to sabotaging the Stingers' Black Cat audition: Harvey was late to an acoustic show at Ruta Maya earlier that same day, so Meyers sang all his parts. When Harvey finally arrived, Meyers wouldn't let him onstage.

"I was sick," vows Harvey. "I was sick, and I couldn't find a microphone, and Johnny wouldn't share one with me."

"Right after that, we went to the Black Cat tryout," remembers Meyers. "With all that anger and energy, we said, 'Look, we've gotta play a gig, so let's play the gig.' For then, for us -- first gig -- it was great. A month after that, we had the Thursday slot."

The Stingers could rightly be called the last of the Black Cat bands. Before burning down in early 2002, the worse-for-wear Sixth Street venue fostered an impressive roster of earthy, funk-soaked local talent including Joe Rockhead, Little Sister, and Soulhat. But by the time the Stingers came along, it had been years since a Black Cat band had drummed up much buzz.

Nevertheless, the band raised its profile further by releasing a self-titled CD and playing several Rock & Roll Free-for-Alls, which came about courtesy of Meyers' Mars colleague, Paul Minor. When Dunn was assigned overseas as expected, that was that. Or so they thought.

Minor wanted the remaining Stingers to play a set at the 2000 Free-for-All birthday festival, a weeklong run of free shows and perpetual highlight of the Hole in the Wall calendar. As their singer was en route to Germany to be all he could be, the Stingers were at a bit of a loss.

"We're like, 'Paul, we're not a fuckin' band anymore, we don't have our singer,'" recalls Pestorius. "He's like, 'Ah, forget it. Work it out. Do something else.' So I cram how to play eight of the songs on Rhodes piano, and we bring in another guy to play bass. We do the set.

"I leave for Europe the next day for a month. I come back and it's like, 'So, did everybody have a good time?'

"'You wanna play another gig?'"

After a gin-soaked summer learning to play keyboards atop a window air-conditioning unit, Pestorius and the other Stingers regrouped, even winning back Thursdays at the Black Cat. Black Cat bands were expected to play two- to two-and-a-half-hour sets with no breaks and, with little media attention directed the club's way, were responsible for all their own promotion. The best of it came from overseas.

Dunn met a Grover staffer at a show in Germany and eventually passed along an EP. The label liked it enough to sponsor the Stingers' first European tour. Also, the label hooked the band up with their top choice of producers, Victor Rice, an NYC-dwelling studio swami behind several Grover releases. The result is Austin's first great album of 2003.

This Good Thing draws its rich, vibrant energy from the same wellspring as the original ska masters: soul, R&B, reggae, calypso. Meyers' airtight chords frame Pestorius' breezelike organ swells and Myers' cockeyed trombone glissandi, as Harvey croons about missed melodramas over Camero and Kelly's rock-steady rhythms. All told, it washes over you like a tall glass of island rum, warming your insides and loosening your inhibitions. Ska may be a remnant of another era, the Stingers themselves about as retro as Quentin Tarantino's Reservoir Dogs, but it works well enough to fill the Continental Club, Flamingo Cantina, or Ego's on weekends.

The Stingers know they don't fit in, but they'd like to.

"I mean, there are really great roots bands to come out of here," Meyers says. "We'd like to be known as the roots-ska band."

The Stingers play a Jupiter Records in-store Friday, 7pm, and at the Flamingo Cantina Saturday, 11pm.