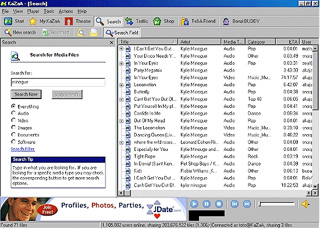 On the FastTrack network along with Grokster, the one formerly used by Morpheus, KaZaA is far and away the most popular service, mainly because of its "for dummies" interface. Like most current services, however, it's frustrating due to the nasty spyware that wreaks havoc with users' machines and with an amazing lack of selection considering the number of files shared. A recent search for the Sir Douglas Quintet's "Mendocino" produced exactly one result, one that could be downloaded only after weeks' worth of broken connections.

Once seen as Napster's heir apparent, Morpheus now runs on the Gnutella network, and is but a shell of what it once was when it was on the DirectConnect network.

On the same network as KaZaA, Grokster is simply a different interface that offers musicians an innovative way to provide and "tag" their MP3s so that users are offered a way to purchase their entire album on the spot.

In the fickle world of peer-to-peer services, iMesh may have already seen its better days. Still No. 2 in popularity behind KaZaA/FastTrack, iMesh is plagued by slowdowns and a bevy of nasty pop-up ads and spyware.

Uses similar technology to Gnutella but reportedly runs faster and avoids the connection problems of KaZaA/FastTrack.

BigChampagne's Eric Garland touts SoulSeek as one to watch. "It's a little geeky, but it's definitely attracting people who are serious about subcultures." Not very aesthetically pleasing thanks to a crowded desktop, it mimics key features of Audiogalaxy. "It doesn't have a Web presence or a music magazine, but it does have groups, which I think are key."

"Like the Audiogalaxy Satellite in a vacuum," says Garland. "The interface is kind of an AG copycat. The problem is that it doesn't have nearly the audience or the selection of Audiogalaxy, yet."