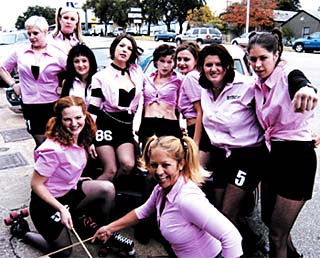 Deep inside every one of us lurks an intense desire to watch attractive people in tight-fitting, shiny outfits wale on each other; it's why I still watch WWE RAW months after "Stone Cold" Steve Austin left. Although "TCB" isn't technically a sports column, the only thing better than girls on roller skates banging into each other is girls on roller skates banging into each other with bands playing. That's right, the sophomore season of Austin All-Girl Roller Entertainment has finally, er, rolled around. Popularly known as the rock-'em-sock-'em Rollerderby, this year the action expands to five local teams. If you or your favorite lady think you're bad enough to go up against Electra Blu, Lolli Pop, Annie Social, Tinkerhelle, and the rest, break out those elbow pads and head over to the Playland Skating Center at Burnet and 183 from 8-10pm this Sunday for tryouts. Potential players should be experienced skaters 21 years and up, and it helps to "have a little fire in you," says Heather Burdick of Bad Girl, Good Woman Productions. The brawling begins Feb. 16 at the "Valentine's Day Massacre" with music by U.S.S. Friendship, who've lensed a video (conveniently titled "Rollergirl") starring several derby crashers that will be shown at Beerland Feb. 7. Earlier that same day, several Rollergirls will be signing calendars at Cheapo Discs from 6-9pm, joined by the Flametrick Subs and others. Burdick says BGGW plans to keep the cost of match tickets at $10 and that the response to the first season was "overwhelming and shocking." Last year's final bout sold out all 1,200 tickets, with another 300-500 people turned away.

Chances are if you see a camera crew around Austin this week, it's probably not people from Access Hollywood trying to find out where and when Alamo star Dennis Quaid's band is playing next. (And don't call me, because I don't know either.) Be at the Continental Club for Friday's Hot Club of Cowtown happy hour (6:30-9pm) and you might show up on the Food Network, however. According to Continental backdoor woman Dianne Scott, "one of those in control" of the channel's Forty Dollars a Day program also happens to be a fan of the lissome Western swing trio. Members of local dance troupe Four on the Floor will be on hand as ringers Friday, though there might be more room on the dance floor, albeit no cameras, at Hot Club's regular happy hour tonight (Thursday). If happy hour normally finds you just starting your day, you might be perfect for Comedy Central's Insomniac. The show, which features funnyman Dave Attell seeking out all manner of nocturnal diversions, will be dropping in on several Austin locations this weekend. Word on the street has Attell and Co. stopping by the Flamingo Cantina tonight for Echoset, with Room 710 and the Rollerderby tryouts (see above) somewhere in the mix. That's if the acerbic comedian survives a night at the Yellow Rose with a guy who makes metal underwear for some of the dancers, followed by an afterparty at South Austin studio/rehearsal space Million Dollar Sound, where punk queens the Applicators could be on hand for some wee-hours rocking. Coming soon: Insomniac: Too Hot for TV! As far as other Austinites on televison, look for a Tex-centric Saturday Night Live next month featuring Matthew McConaughey and the Dixie Chicks. Hopefully this means the return of Horatio Sanz as Freddy Fender, last seen hilariously shilling for "Derek Jeter's Taco Hole." And if your 17-year-old niece/neighbor/babysitter is humming an oddly familiar tune this week, that's because Austin rockers Failsafe had their song "Kozy Claustrophobic" played during a "college-bar scene" in the most recent episode of WB linchpin Dawson's Creek. From what I've seen of the Creek, starring the Beek, the entire show is a college-bar scene, except when the Beek is getting it on with Katie Holmes. Failsafe play a college-bar scene even closer to home when they inaugurate 101X's Homegrown Wednesdays at the Red Eyed Fly on Jan. 29.

With his Ashcroft-baiting "John Walker's Blues," "Stone Cold" Steve Earle has probably been called a lot of things lately, but don't call him "asshole." Earle used to hang out in Austin at Greezy Wheels shows during the Seventies, according to the Wheels' Cleve Hattersley, so via a third party, Hattersley sent the Schertz native greetings along the lines of, "Hey, how ya doing, asshole?" Evidently Hattersley's jocular tone was not relayed, because Earle promptly went "ballistic" and made life "miserable" for La Zona Rosa's employees. Since Hattersley also passed along information regarding next week's benefit for ailing drummer "Frosty" Smith, the Wheelsman reckons, "He thought I was calling him an asshole because he isn't playing the Frosty benefit. Not my meaning, clearly." Though Earle turned in a raucous, if crowded, show, Hattersley has extra incentive to make nice with the club: The Frosty benefit lineup is set. Taking the stage Thursday, Jan. 30 are: Delbert McClinton, Lee Roy Parnell, Omar & the Howlers, Toni Price, Double Trouble with Stephen Bruton, Soulhat, Terry Bozzio, Tex Thomas & the Danglin' Wranglers, Guy Forsyth, David Grissom, Derek O'Brien & the Blue Monday Regulars, the Nortons, David Holt, Ernie Durawa & Mark Andes, Los Lonely Boys, and of course the inevitable special guest or two.

Quote of the week: "Drink up, because there's a bass solo soon." Thus spake Voltage at the hellbilly riff-rockers' reunion at a packed Lovejoy's last weekend, which also saw the welcome return of "Holy Happy Hour" Charlie. Not spotted in the crowd was former Smashing Pumpkins bassist D'Arcy Wretzky, who just moved to town... Beerland is hosting a benefit Friday for 00-Spies, whose gear (some of it borrowed) was stolen in Dallas last month. Then Darren from the Spies and Deadites found out he had diabetes; that benefit is next month... While watching Tampa Bay and Oakland go all Jolly Roger on each other Sunday, keep an eye peeled for a Monster.com commercial featuring Dale Watson and band, Jon Blondell, and Tequila Mockingbird owner Danny Levin... The Yuppie Pricks, subject of a February GQ article by hipster scribe (and new local) Neal Pollack, have a busy weekend. They're playing Pollack's book release Friday at the Escapist bookstore on South First, and Saturday at Emo's with the Applicators, Lower Class Brats, and Peelander-Z. Using their own $500, they plan to give away a "yuppie makeover" during their set. Only punks need apply, because Prick Trevor Middleton warns, "We're not going to take anyone if they're too clean-cut." 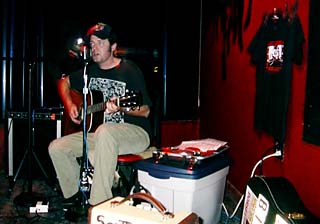 Honky bluesman Scott H. Biram's feverish rasp is as bare-ass naked as he used to be onstage. Biram, 28, began his performing career several years ago in San Marcos punk rockers the Thangs, amid "lots of blasphemy and nakedness."

"I still get, 'Hey, you're that guy that used to get naked in San Marcos,'" admits Biram, now fully clothed.

Nowadays, Biram digs deep into the songbooks of country-blues pioneers Mance Lipscomb, Leadbelly, Lightnin' Hopkins, and Son House, but he does it in punk-spirited places like North Loop pizza joint the Parlor. His latest CD, Preachin' & Hollerin', is exactly that: Biram yelping the talking gospel blues, overworking his guitar and foot-stomping contraption, occasionally yodeling and blowing harmonica, and generally rattling on about prison, the devil, wayward women, and Tom Moore's Farm.

"Somebody the other day said that it's gonna just keep getting harder until it turns back into punk rock," chuckles Biram.

Biram is also a lifelong bluegrass lover; his dad took him to see Doc Watson at the Armadillo as a youngster. He put it on the back burner during his punk rock/heavy metal years, but rekindled it in time to put in several years as part of local picking outfit Bluegrass Drive-By. Hank Williams III is an avowed fan who now covers Preachin' and Hollerin's "Truckdriver," a song Biram recorded with buddies the Weary Boys.

"They're some of the only people I can hang out with in Austin when I come up here," Biram says. "I have old friends here, but I really just don't hang out with many people. That's why I live in the country. I'm kind of anti-social."

Biram has chickens, a meat smoker, and a PlayStation2 on his farm outside Seguin, but he won't be spending much time there in the near future. When he leaves for a three-and-a-half-week tour in April (recently he's been shopping for a new van), an old friend from Southwest Texas and his film crew will be riding along.

"I guess they thought it would be an interesting thing to do," shrugs Biram. "It's kind of like a journey into my career picking up a little bit." 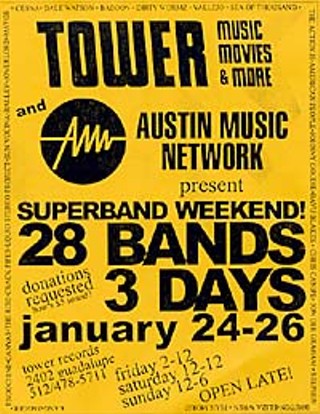 The Austin Music Network stresses this weekend's "Superband Marathon" at Tower Records is merely an appreciative gesture by the store, not a benefit. However, if you're feeling generous, they're taking donations anyway ($5 is suggested).