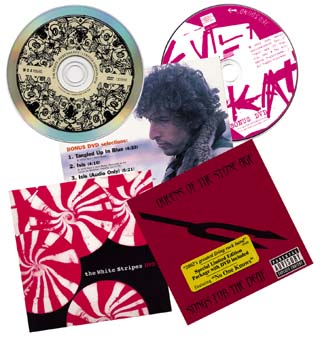 The advent of file-sharing: just deserts for the music industry's sins against artists and fans alike? Perhaps. Nevertheless, major labels have begun likening file-sharing to terrorism, painting some of their best customers as felons. Although this war dance shows no signs of abating, the industry's latest salvo against downloading music for free off the Internet has actually resulted in a minor windfall for the felons in question: the bonus DVD.

As 2002 ended, new releases were packaged with "limited edition" DVDs with increasing regularity. Notable 2002 albums with bonus DVDs include Jurassic 5's Power in Numbers, the Donnas' Spend the Night, Tom Petty & the Heartbreakers' The Last DJ, the Roots' Phrenology, Primal Screams' Evil Heat, and the Foo Fighters' One by One. The labels also used the bonus DVD to revive holiday sales of reissued 2001 releases such as the Strokes' Is This It, the White Stripes' White Blood Cells, and Pink's M!ssundaztood.

Varying in length and ambition, these DVDs feature a wide array of supplementary materials. Some have elaborately filmed music videos and concert performances, while others employ crude backstage footage shot with camcorders. Nonvideo elements such as audio tracks not available on the CD, 5.1 audio mixes, bios, and photos are also used. Last year's Eazy-E retrospective, Impact of a Legend, came with a DVD that included a DVD-ROM video game called Cuttin' Loose in Compton and a karaoke version (!) of "Boyz-N-the Hood."

The bonus DVD is the logical successor to the posters, iron-on T-shirt transfers, and other geegaws that came packaged with vinyl LPs in the Sixties and Seventies. Famous inserts of the vinyl era include photos of John, Paul, George, and Ringo in the "White Album," postcards in the Rolling Stones' Exile on Main Street, and the two posters included with Pink Floyd's Dark Side of the Moon. Whether it was a giant piece of rolling paper in Cheech & Chong's Big Bambú or the plastic shopping bag included with The Partridge Family's Shopping Bag, all of these items were designed to flesh out the listener's impression of the artists beyond the grooves.

Although the longer running time of CDs allows for aural extras like bonus tracks, the standard jewel case doesn't lend itself to the elaborate packaging of yesteryear. More recently, the availability and affordability of blank CDs and CD burners have greatly devalued prerecorded discs. It's now quite a stretch to charge $18.98 for a CD that can be copied for less than a buck, if not downloaded illegally for free. As Atlantic marketing VP Vicky Germaise recently told Billboard, "At this point, we're willing to stand on our heads for people to buy our product rather than steal it."

Meanwhile, DVD players, which also play CDs, are on the way to replacing stand-alone CD players and VCRs in one fell swoop. Even in the midst of a recession that has decimated music sales for two years running, DVD players are the fastest-adopted technology in recent history, estimated to be in half of all U.S. households by the beginning of 2003. Taken together with the ease of packaging a DVD with a CD, and the fact that much of the content utilized for bonus DVDs already exists, it's easy to see how this became an economical proposition for labels looking to boost sales.

"Labels spend millions of dollars on videos that MTV doesn't play, then wonder what the hell they're supposed to do with them," says Waterloo Records owner John Kunz. "Now they have their answer."

One of the first packages to feature a bonus DVD was SRV, the Stevie Ray Vaughan & Double Trouble box set from 2000. The DVD features six unaired songs from Vaughan's last Austin City Limits appearance in 1989. Anyone taken to ignoring Vaughan's legacy as a knee-jerk response to the barrage of fevered veneration will be rejuvenated by this magical footage. By contrast, Eric Clapton's latest, the staid CD/DVD One More Car, One More Rider -- also sold without the DVD -- is intended for mature audiences only. As the genteel crowd cheers for an encore after "Layla," a wide shot of the darkened stage finds but one lonely lighter thrust skyward.

The bonus DVD came into its own as a sop for would-be file-sharers when The Eminem Show was released last summer. In addition to pushing up the album's release date at the last minute in response to file-sharing, Interscope included a 45-minute bonus DVD with initial shipments, helping make The Eminem Show last year's bestselling album by a wide margin. Interscope also used a bonus DVD of live and backstage footage to boost initial sales of Queens of the Stone Age's Songs for the Deaf.

In addition to concert and studio footage, the Eminem disc contains promos for the film 8-Mile and the All Access Europe DVD. Similarly, the DVD included with some versions of U2's The Best of 1990-2000 has promos for the album's full-length DVD companion along with a plodding live performance of "Please" from 1997's Pop tour and a throwaway alternate video for "Beautiful Day." Skimpier but more satisfying is the DVD included with Bob Dylan Live 1975. Although it's only two songs, "Tangled Up in Blue" and "Isis," the DVD captures the impenetrable halo of energy that made the early Rolling Thunder Revue shows eternal wish-you-were-there events.

For the White Stripes' White Blood Cells DVD reissue, V2 Music eschewed live footage for the album's four music videos along with two rare audio tracks. The Stripes' unique visual presentation was a perfect fit for this format, particularly on the award-winning, done-with-Legos video for "Fell in Love With a Girl."

"The videos were a given," says V2 Marketing Director Lisa Klipsic. "Both the 'Fell in Love With a Girl' and 'Dead Leaves and the Dirty Ground' videos did incredibly well on all video outlets. The band also had great videos for 'Hotel Yorba' and 'We're Going to be Friends,' which they made before signing to V2. Both videos had very little exposure. Offering all videos to an album is nice for any completist."

Unlike many bonus DVD packages, which cost more than the CD alone, the limited edition of White Blood Cells is the same price as the original version. Instead of including the DVD inside the jewel case, V2 shrink-wrapped the DVD to the CD.

"Fans who already bought the album were able to buy the DVD then and had the option to give the album to a friend," notes Klipsic.

Nevertheless, some fans are bound to feel ripped off by such a tactic.

"That's something independent retailers are cognizant of," says Waterloo's Kunz. "A lot of the so-called 'early adopters' shop here."

Kunz and other indie retailers made sure RCA knew this before reissuing the Strokes' Is This It with a DVD, so the label made stand-alone DVDs available to select stores. This way, fans could own the talk show-style video for "Last Nite" and the Strokes vs. Guided by Voices Family Feud parody from the "Someday" video without having to buy two albums.

The best bonus DVDs are the ones that emanate a fresh creative approach and/or a keen understanding of what a fan wants. Although having Andy Dick interview the Donnas sounds good on paper, the result is awkward and contrived. Following Jurassic 5's Akil on a stroll through his old South Central L.A. neighborhood, recalling the 1992 riots and hearing him have an impromptu, racially tinged conversation with a beat cop makes for much more engaging television.

Tori Amos' Scarlet's Walk and Chris Robinson's New Earth Mud are sprawling, sometimes turgid indulgences that are clearly designed to appeal to their defenders as opposed to a mass audience. Yet one can appreciate that appeal more when viewing Robinson engaged in the songwriting process in a Paris studio, or sifting through the expansive limited-edition Amos package, which includes a DVD, stickers, and even a charm to wear around your neck.

"I wouldn't be surprised if DVD footage became part of standard album packaging," posits V2's Klipsic. "A DVD is such a great vessel to circulate videos and marketing tools, as well as personal content on the band. So many bands create videos and document themselves in the creative process at home, in the studio, and at live shows."

Although certain formulaic doctrines have already emerged, the bonus DVD remains a wide-open avenue of creative potential. Anything from a Spike Jonze-directed masterpiece to garbled VHS footage of Uncle Fred doing his Jack Benny impression is fair game. But as more artists do DVDs, the pressure to create something that stands out will intensify.

After all, one can witness only so much tour-bus tomfoolery before the added value vanishes forever.

DVD, CD, Bonus DVD, file-sharing, Jurassic 5's Power in Numbers, the Donnas' Spend the Night, the Roots' Phrenology, Foo Fighters' One by One, Strokes' Is This It?, the White Stripes' White Blood Cells, Pink's M!ssundaztood, Eazy-E's Impact of a Legend, Waterloo Reco