More on the Antone's merger, the noise ordinance, and finally, Abra Moore. 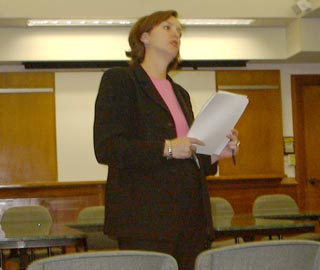 Blues From a Turnip

Although vegetable bloodletting must be easier than gathering concrete information about the recent Antone's/Direct Events "merger," a clearer picture is forming in slightly less time than the average Eric Johnson album. Direct Events Pooh-Bah Tim O'Connor himself helped unmuddy the waters, surprising us all with a call to Chronicle HQ last week. Not a surprise was O'Connor's lack of comment on speculation D.E. had staved off the embattled club's many creditors with a cash "donation," though he did confirm the Bee Cave-based company is now overseeing "all aspects" of Antone's operations. Whatever happened, it worked, but just barely. "As late as last Monday, there was a real chance that Antone's at that location could have been gone for good, and we felt that just couldn't happen," said O'Connor. Even as he adds Antone's to his roster of A-list Austin venues (the Backyard, La Zona Rosa, Austin Music Hall), O'Connor was quick to point out that several of the club's employees were immediately rehired. Moreover, he emphasized that fans of Jimmie Vaughan, Buddy Guy, et al., needn't worry about a sudden blues vacuum. "I've known Clifford [Antone] for a long time," O'Connor said. "This is his club -- we would be fools not to take his guidance." While Stubb's Charles Attal continues overseeing the musical menu at La Zona Rosa, the booking situation at Fifth and Lavaca is "wide open," according to Direct Events' Kevin Brelsford, but considering D.E. can now place concerts in 500- to 3,000-capacity venues, the long-term forecast seems to call for more roadshows. Suggestion: With the imminent closing of the Mercury, several local bands (Hairy Apes BMX, Larry, Grupo Fantasma, Groovin' Ground, Olospo) will soon be looking for a new home base, so jam-friendly bookings may help shore up the bottom line at Antone's until the blues explosion that accompanies Clifford's triumphant return to his namesake club, via Güero's, this summer. We hear they're also saving him a table at Sugar's.

Don't look now, but Austin could have a new noise ordinance in a few short weeks. Monday night, Assistant City Manager Laura Huffman hosted a public meeting to review changes to the ordinance recommended by an advisory committee. The chief amendment was the creation of a variance procedure to allow venues outside the Sixth Street and Warehouse entertainment districts, the two principal areas affected by the ordinance, to host live music until 2am seven nights a week. (This includes all South Austin venues, as well as those on Red River north of Seventh.) Huffman said the city hopes to allow owners to meet the criteria in their own style, with "compatibility with surrounding uses" being the bottom line. Other changes included altering language so multifamily dwellings fit the definition of "residential area," outlining an appeal process for denied permits and creating an exemption for the South by Southwest Music Festival. Sixth Street club owner Angela Gillen of the Flamingo Cantina said she was mostly content with the ordinance, albeit a little concerned with the standard operating procedures the city uses for enforcement because, "They haven't come up with new ones to say how the ordinance will be enforced." Overall, said Huffman, the process has been "remarkably peaceful." Both the Music Commission and the Downtown Alliance will review the changes this week, with the ordinance scheduled for action at the Jan. 30 City Council meeting.

Up from the deep and with a new album in the can are slo-core Austin dreamweavers Knife in the Water. "It's like the Beverly Hillbillies go to Weimar Berlin!" swears Knife guitarist/singer Aaron Blount of Knife in the Water Cut the Cord, due out in April on Austin's own Peek-a-Boo Records. Recorded in "Little D" (musicianspeak for Denton), the "less dark, more low-end" album is KITW's first full-length since 2000's Red River and, even better, is "a concept album about family, in both the [Charles] Manson sense and the blood sense." Keeping it all in the family, the two newest Knife additions, drummer Steven Kerner and bassist Kiki Solis, have passed their initiation and moved in with the band. "All five of us live in the same house now," winks Blount. "It's like the Monkees. The X-rated Monkees." Tonight's (Thursday) show at the Mercury is appropriately a family affair, with Peek-a-Boo siblings Black Lipstick (themselves ready to drop their full-length debut Converted Thieves, likewise in April) and the Octopus Project. Following the show, Knife in the Water climbs into the van and further tests their familial bonds with several months of touring, first through the Southeast with Western Keys; then, according to Blount, "We just sort of zigzag back and forth."

Schatzi will take time off from their never-ending tour next month to record their next LP in lovely Omaha, Neb., with Mike Mogis, engineer for emo royalty Bright Eyes and neo-goths the Faint. Afterward, according to manager George Couri, the band hits the road again, because, "They get mad when they have to come home for two weeks." Look for a summer release on Hollywood Records... Legendary Austin drummer Barry "Frosty" Smith (Soulhat, Greezy Wheels, Papa Mali) is laid up with serious heart trouble, and his friend Cleve Hattersley is frantically organizing a last-minute fundraiser for "breathing-room money." Omar & the Howlers, Double Trouble, Guy Forsyth, and several others have already agreed to perform Jan. 30 at La Zona Rosa, and Hattersley, who reports Frosty is at home and in good spirits, says, "Everybody's gonna come through, eventually."... Longtime Cave Club/Continental Club bartender Cheryl Newland recently succumbed to pneumonia following a bout with breast cancer; her funeral will be 3pm Friday at Cook-Walden's Forest Oaks Cemetery, 6300 Ben White... Condolences to Spencer Gibb of 54 Seconds on the loss of his uncle Maurice, also known as one-third of the Bee Gees... Finally, my depiction of New York last week has been called "less than flattering," so I obviously forgot to mention how much fun I had. Much love to Peter, Alex, Dan, Amanda, Andy, Jen, and the rest of the Music Grinders, and a special Texas-sized shout-out to Mike Brick for keeping me well lubricated at various Houston nightspots when not covering Enron's collapse for The New York Times. Mike, there's a bottle of vodka here at the office that has yet to be spoken for...

You didn't think we'd forget a little thing like SXSW, did you? The latest band list includes Alabama Thunderpussy, Be Good Tanyas, Calexico, Cat Power, the D4, David Cross, Datsuns, Joe Jackson Band, Lagwagon, Nebula, Pedro the Lion, Simian, Supergrass, Lee Ann Womack, and Yo La Tengo. For the complete list see www.sxsw.com. For those seeking hands-on experience, the conference's second volunteer call is Sunday at the Hyatt on Barton Springs Road from 1-5:30pm. Expect to stay for about an hour. There's little doubt George Strait will fill the Erwin Center Sunday night, as it's his first Austin appearance in seven years, but the Pearsall native could also fill a sizable chunk of the Drum with the 57 million CDs he's sold since his 1981 debut Strait Country. Laid flat, those CDs would stretch from San Diego to Washington, D.C., and back to El Paso (4,900 miles) and stood on end would follow I-35 from Temple to Kansas City (674 miles). It takes roughly 675,000 CDs to cover a city square block, and Strait's collected sales would amount to a pile just over five feet high. (One CD is 5 inches long by 5-and-a-half inches tall by three-fourths of an inch deep.) For those keeping score at home, that's a NASA-like volume of 648,000 cubic feet. As of Tuesday, fewer than 300 tickets remained for Sunday's show. Abra Moore as the next Avril Lavigne? That's what music-biz Zeus Clive Davis had in mind, says Moore's manager George Couri. Moore's No Fear, originally slated for release last summer on Davis' J Records, has yet to see the light of day, though Guns n' Roses' Chinese Democracy still has it beat by several years. Now it appears that Moore will never be labelmates with, among others, Alicia Keys and Angie Stone. Couri says the label's original idea for the wispy-voiced Poi Dog Pondering veteran was as a slightly funkier Dido, but as the album got closer to release, Davis became ever more obsessed with the younger likes of Michelle Branch, Vanessa Carlton, and Lavigne, and insisted that be Moore's direction. This was a problem, explains Couri, because, "Abra is 35." Couri expects Moore and J to part ways this month, once the "big, dumb, cheesy pop singles" produced by Davis and tacked onto the album are done away with. The new plan, same as the old plan, is to pursue avenues (NPR, Conan O'Brien) that might strike a chord with fans of similar adult-oriented pop in the David Gray/Norah Jones vein. After a pair of new songs are recorded, the record should be ready to go by summer, with a few labels already expressing interest, according to Couri. We can now be reasonably sure no one will ever force Moore to perform in one of those dreadful wifebeater/necktie ensembles, and thank God for that.