Out with the old ("Dancing About Architecture"), and in with the news: "TCB" and the closing of the Mercury and Sound Exchange.

First things first. I feel a little like Colin Quinn taking over "Weekend Update" from Norm Macdonald on Saturday Night Live a few years back. On the Remote Control alumnus' first night behind the desk, he opened with, "You know how you go to your favorite bar for years, and the same guy always pours your drinks; then one day you go in, and there's a new guy behind the bar? ..." Ken Lieck certainly left me some big shoes to fill (when he wore shoes), but if I can squeeze in enough Tenacious D, Mike Nesmith, and Cartoon Network references, the transition ought to be smooth enough. By the way, Ken, some kind soul in Houston sent you a holiday bottle of Absolut. I can't guarantee how long it'll stay untouched, so you better come claim it. This column writin' sure is thirsty work!

Actually, writing this column promises to be a breeze compared with naming the blasted thing. The last time I had to name a column was for the Clear Brook Connection back in high school, so "Shades of Gray" was immediately disqualified. Pillaging song titles from my favorite bands didn't help much either, although U2's "Even Better Than the Real Thing," Run-DMC's "It's Like That," and Radiohead's "No Surprises" might have won out under different circumstances. Eventually, the matter was settled over pints and way too much fried food at the Dog & Duck. The hands-down best suggestion, which Michael Chamy and I loved, was the Smiths' "Stop Me If You Think You've Heard This One Before," but it was shot down by Morrissey-haters Raoul Hernandez and Margaret Moser (who can be seen this Friday, 10pm, on the VH1 special named after her and Bill Crawford's book, Rock Stars Do the Dumbest Things). An early leader was the borderline blasphemous "Jesus Wrote My Column," and "I'm on the Guest List" was rejected straightaway for fear of sending the wrong message. We thought we had a pair of Eighties winners in "Jumping Someone Else's Train" and "Bring on the Dancing Horses," but we knew it was time to quit when someone suggested "Some People Call Me Maurice" -- and we considered it. Ultimately, we went with Raoul's first suggestion, "TCB," because we love Elvis, lightning bolts are cool, and the initials can stand for just about anything: Texas Cattle Bloaters, Travis County Beekeepers, Trailer Court Bulletins, Texas Cleavage Boosters, Tax Cuts Blow, and the very meta This Column By. Also, knowing it could soon become "That Chris Bastard" helps me forget that "Taking Care of Business" remains best-known as a classic-rock staple by a bunch of frickin' Canadians.

A Good Year for the Roses

For those who are interested, here's how I spent the past 12 months; everyone else can just skip ahead. Basically, I moved in with my parents and played a lot of Grand Theft Auto III, occasionally venturing into Houston to see the Damnations, the Strokes, and an especially memorable Brian Jonestown Massacre/Westbury Squares show. Then I headed to Brooklyn, where I lived at a construction site, investigated the janitorial and food-delivery professions, and drank a lot of Lone Star at Doc Holliday's on Avenue A in the East Village. Homesick and nearly broke, I applied for a job at the Jasper Newsboy deep in the East Texas Piney Woods. Living with my grandmother, I watched a sleepy little town learn that fishing tournaments and tax incentives for big-time retailers like Lowe's can't quite replace a moribund timber industry. On a happier note, the high school football Bulldogs, who reached the Class 3A Division I state semifinals this season, helped restore some civic pride and self-esteem to a place still healing from the horrible 1998 James Byrd Jr. dragging death. Weary of photographing freshly slaughtered deer, I was only too happy to head back to the home of my beloved Horns, though the main reason I'm back so soon is a certain former member of Galveston/Austin New Wave rockers the Shiverz. She knows who she is. 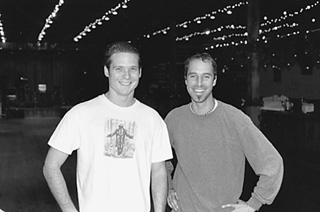 Now for some actual news; I only wish it were better. At least it's familiar: Yet another live music venue is about to fall by the wayside. This time the damage will be felt deepest in the indie rock, funk-jazz, and hip-hop communities, because the Mercury will close its doors as of May 1. After a year of deliberation, Mercury Entertainment owner Mark Collins elected not to renew his option with his partners, opting instead to spend more time with his family and explore different aspects of the music business, including artist management (he currently manages former Hip Hop Humpday anchor D-Madness). "I've been doing this six years," Collins says. "It's time for a change." One thing nobody associated with the club wants is a lot of weeping and gnashing of teeth. Talent booker Philip Croley says, "We're here for four more months, so we're going to enjoy it." Will Johnson of Centro-matic, meanwhile, remarks, "I wish I could take them all to the beach," while Kevin Russell of the Gourds laments, "This one stings." Elsewhere in clubland, rumors that Antone's had been sold proved untrue, but to help abate the Home of the Blues' longstanding financial problems, Direct Events has assumed day-to-day management duties, including booking, as of this week. Basking in the afterglow of three sold-out Maceo Parker shows, Susan Antone says the two parties have been friendly for a long time, and, "The calendar is the same; the bands are the same; everything should be about the same." Or almost everything: Now looking for work are manager Brad First and assistant manager Stephanie Seeley. Finally, while he waits for the no-nightclub condition of his release to expire in five months, Antone's namesake Clifford Antone appears to be enjoying his stint greeting patrons of South Congress eatery Güero's, even reportedly sitting in with the Keller Bros. during the restaurant's popular Sunday afternoon jam sessions. 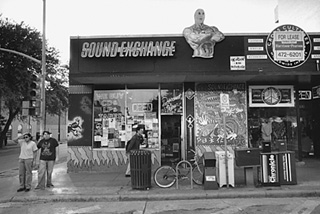 "I think it sucks," says the always-candid Craig Koon in reference to the final days of Sound Exchange. According to Koon, the store that served as Ground Zero for the local punk rock scene was negotiating to remain at 21st and Guadalupe until a new tenant was found, which Koon figured would be around April. However, owner Mark Alman says the store had been operating on a month-to-month lease for approximately the past two years, which he simply chose not to renew for personal reasons. "It's not an easy choice," says Alman. Therefore, the 22-year-old store will fade into history at the end of January, darkening the door of a place instrumental to the careers of the Big Boys, Dicks, Poison 13, Motards, and about a thousand other bands. Koon, who quit last weekend after 11 years, says his immediate plans are "staying home with my kid and putting everything I own on eBay." Meanwhile, the increasingly threadbare Sound Exchange is liquidating as much inventory as possible while ceding the mantle of Austin's premier underground music outlet to Thirty Three Degrees and Donkey Records. Also alive and well is Alien Records.

It's always somewhat shocking when an esteemed club or record store shuts its doors, especially when said establishment obviously values music over profit margins, and both the Mercury and Sound Exchange deserve longer eulogies than can be given here. However, the truth is that even in today's lousy economic climate Austin remains one of the best music towns in America, with more bands than anyone can see in one lifetime and plenty of places to see (and buy) them. Times of national stress and turmoil often spur artists and musicians to new creative heights, so a mini-Renaissance could be just around the bend. But if things do get worse, I'll be there to tell you about it. See you next week. 1. Master the art of levitation.

4. Be able to slam-dunk before year's end.

5. Enlighten others with our spiritual teachings. No nominations for Ray Benson is good news for everyone else. (Photo By John Carrico)

Once again, artists from the Lone Star State (and a few notable ringers) cleaned up when Grammy Award nominations were announced Tuesday morning. Here are a few highlights, with the complete list of nominees at www.grammy.com. The ceremony will be televised on CBS Feb. 23.

Album of the Year: Norah Jones, Come Away With Me; Dixie Chicks, Home