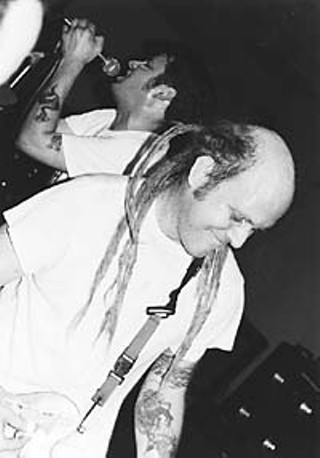 Monkeywrench in the Works: Tim Kerr

Not too many guys are covering songs as diverse as Mose Allison's "Young Man Blues," the Seeds' "Just Let Go," and the Beatles' "Everybody's Got Something to Hide." Tim Kerr has, is, and does, and no discussion of Texas garage rock would be complete without him.

Producer, guitarist, and all-around bon vivant, Kerr kicked things off in the Raul's era with the Big Boys, the Austin punk/funk/skate band people still talk about. After the Big Boys came Poison 13, a band whose slow-and-sloppy blues/garage riffs resounded during a period when every other punker was hammering out furious thrash and hardcore.

That's not even logging in all the time Kerr has spent in the control room flogging bands like the Motards, Sugar Shack, Gospel Swingers, Makers, Glorium, Frigg A-Go-Go, the Hefners, Mooney Suzuki, Quadrajets, Mono Men, Gimmicks, the l-4-5s, Sorts, April March, Crusaders, Countdowns, and Estrella 20/20. You don't pile up credits like that by sitting around on the couch, y'know.