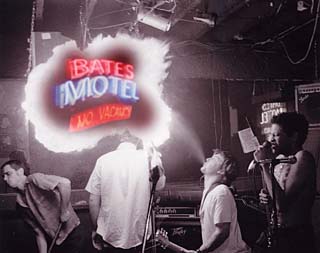 Cleanliness Is Next to the Gutter: the Nineties

Garage rock barely existed in Nineties Austin. The underground was dominated by Trance Syndicate's psychedelic gutter noise that evolved from Crust and Ed Hall into ...And You Will Know Us by the Trail of Dead by 1999. Otherwise, the decade's other signature bands had too much pop (Wannabes), country (Damnations), metal (El Flaco), feedback (Sixteen Deluxe), caffeine (Spoon), pure punk (Motards), and psychosis (the Adults) to be considered garage. And nobody had near enough Farfisa until the Kiss Offs came along.

San Antonio could be counted on to throw a few unkempt three-chord dynamos our way (the Dropouts, Sons of Hercules). Jesus Christ Superfly's batter-fried rockabilly wasn't snotty enough to be punk but still kicked like a runaway mule, and a few UT-spawned bands staged admirably sloppy shows (Inhalants, Teen Titans). The pickings were slim indeed.

If they've only practiced together three or four times, any band is a garage band and seldom has a prayer of playing outside their carport. This was not the case back then. Bands who could scrape together enough money for a cheap demo tape and/or enough friends to constitute an audience could probably play Bates Motel, once nearly burnt down by Empire of Shit and ultimately razed by rabid Kiss Offs fans on its last night.

Though the Bates lasted only two years and is less legendary than its partner in grime the Blue Flamingo, it provided present-day Beerland proprietor Randall Stockton, who served as the motel's manager, bartender, booking agent, and security, with a wealth of memories. Some of which he'd like to forget.

Austin Chronicle: What is a "garage" band?

Randall Stockton: That's a wide-open term these days. [Sons of Hercules guitarist] Mike Mariconda would tell you that garage rock bands are rock & roll bands that have a heavy R&B or blues influence. The difference between a garage rock band and some punk band is that the band was listening to Chuck Berry or the New York Dolls.

AC: When I think about garage bands from the Nineties, I think about the Teen Titans, the Inhalants, Jesus Christ Superfly, the Dropouts.

RS: I'd add the Reclusives. For a while, the Bulemics were pretty garage-y, and the Hatchbacks, probably. The Sons of Hercules and the Shakewells, too.

AC: What were your favorite bands at the Bates?

RS: All of those [laughs]. I've always had that leaning, being in blues bands and stuff. I see similarities between blues' rawness and immediacy, and punk rock. I think garage rock epitomizes the coming together of those two genres.

AC: What was the most fucked-up thing to happen while you were at the Bates?

RS: There were individual moments that were just nuts, like Empire of Shit. I can look back at the heartache fondly now, because I can say, "Yeah, that place was disgusting. It was really dirty." Now I can say that and smile, whereas at the time it was repulsive. But nobody got paid, so there wasn't any way to say, "Look man, I need you to clean this," because we could just say, "For what?" People didn't care, because cleanliness was not what we were about. We were about throwing some bands into a place and having a bunch of cheap beer there.