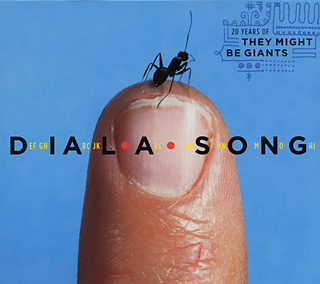 Dial a Song: 20 Years of They Might Be Giants (Elektra/Rhino)

It's hard to fathom that They Might Be Giants have been around for 20 years. Dial a Song is proof that the years just keep flying by, and for the two Johns (Flansburgh and Linnell), it has been a productive couple of decades. This comprehensive, 2-CD anthology of their career, 52 tracks from albums, EPs, singles, and soundtracks, including four that were previously unreleased may be the only TMBG you really need. The first disc contains one pop hit after another. "Birdhouse in Your Soul," "Anna Ng," and "Don't Let's Start" all illustrate the New York duo's eccentric way with words and thoroughly original arrangements of nonrock instrumentation. The second, more adventurous disc, which contains more obscure material, a couple of live tracks, and the unreleased songs, doesn't hold up as well. It includes "I Can Hear You," recorded on a wax cylinder without the use of electricity, and the song "They Might Be Giants," which encompasses all the various outlandish qualities of the band's sound boiled down to two minutes and 40 seconds.