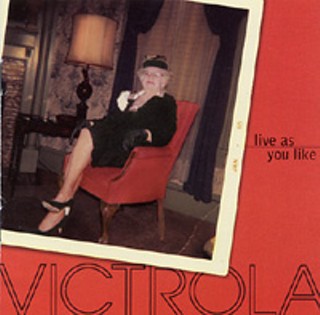 As their name suggests, Victrola is more a cabaret act than your typical Austin band. That makes sense, as vocalist Alice Spencer fronted nouveau cabaret group the Barkers. In Live as You Like, she comes into her own, bolstered by pianist Justin Sherburn (whose tenure in 8 1/2 Souvenirs informs the band's sound), drummer Rob Kidd, upright bassist Lindsay Greene, and reed player Ben Saffer. Leading off, "Big Thinker" finds Spencer ruminating over life's lesser moments without giving in, while the jaunty "Out of My Sight" sees her opting out of a no-win relationship. Both songs make good use of the singer's light-jazz vocals, which blow smoky rather than torchy, cool rather than fiery. The restraint she exercises is mirrored by the band, especially Sherburn and Saffer, from whose "When I'm 64" keyboard-clarinet blend Victrola draws their eclectic sound. No less vital are guest appearances on Sherburn's "Sin" by Glover Gill (whose innovative efforts with Tosca and 81/2 Souvenirs cleared the path for Victrola) and Danny Levin, while John Speice and Ephraim Owens lend their percussion and trumpet talents to Spencer's title track. Live as You Like closes with Spencer-Saffer's moody, movie-soundtrack instrumental, "Dr Chumley's Night Out," a tune Tom Waits might enjoy. The album practically begs for a cigarette and glass of wine to accompany its sidewalk cafe ambience. Got a light?