A new tenet for the SIMS foundation: heal thyself 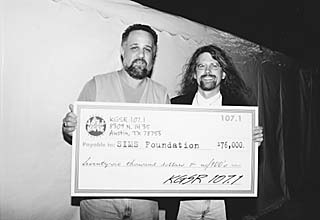 From the smiles and oversized check, you'd think they just won the Publishers Clearing House Sweepstakes. Such is the scene every March at the Austin Music Awards, when KGSR's Jody Denberg and Peyton Wimmer pose for their annual photo-op. That, of course, is the occasion of KGSR's donating proceeds from sales of its annual Broadcasts CD to Austin's SIMS Foundation, a nonprofit health care organization providing low-cost mental health services to local musicians. After five years, the presentation has become a Music Awards tradition, same as the packed VIP tent.

Four months from now, Denberg will once again smile for the cameras, this time behind a cardboard blowup of a check for nearly a quarter of a million dollars from sales of the just-released Broadcasts Vol. 10 (see review, p.56). For the first time, the booklets for the 25,000 CDs pressed include the SIMS mission statement and a thumbnail-sized photo of Sims Ellison, the local hard rock bassist whose 1995 suicide served as the catalyst for the organization.

There will be one noticeable difference in this year's presentation, however: Wimmer, SIMS' founding executive director, won't be there. Denberg will, but only after taking heed of the music community's growing concern about the efficiency and financial future of SIMS. His fears were so profound, he says, that he came perilously close to earmarking the Broadcasts money for a different charity.

By all accounts, not even SIMS' board of directors felt Denberg's fears were unwarranted. They knew full well that for most of its seven-year run, SIMS has been overextended and underfunded. By last fall, it was clear that an organization reaching out to others had found itself in need of critical care. At that point, there were three major concerns: