American Idol picks Austinite Dana Clark to hopefully win the hearts of America in the next round of finals. 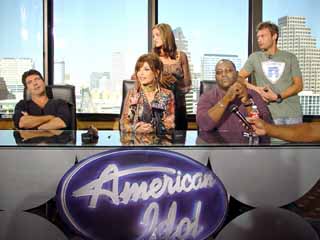 Perhaps Redd Volkaert said it best at a recent Continental Club show when a patron's dog bounded up to the front of the dance floor and proudly took a dump, dead center in front of the stage. "Everybody's a critic," shrugged Volkaert. Certainly there's no shortage of people looking to be criticized in town, as the turnout for this week's Austin Idol stop was nothing short of phenomenal. In fact, team Idol had to add 600 audition slots in order to accommodate the number of hopefuls looking to be judged by the panel that selected Dallas-area Kelly Clarkson as their first idol last year. As a result, the total number of hopefuls ran in excess of 2,000, far exceeding those in any of the other half-dozen tryout cities. By Monday, that number was whittled down to around a dozen considered worthy of moving on to Los Angeles and the televised portion of Idol.

Sunday's press conference at the Hyatt heard the oft-repeated message that the show was meant to be fun, with one of the three judges, Simon Cowell, adding, "Someone's also got a chance to be very, very rich!" Mr. Mince No Words, Cowell further assured that the performances they'd seen in Austin were of "better quality" than in previous cities, specifically among the male contestants. Not to be too complimentary, he added that a good performance alone won't determine the winner. "Is it going to be an image or a voice?" he asked rhetorically. As far as the enormous crowds drawn to the Texas tryouts, judge Randy Jackson quipped, "It's a big state!" Perhaps they were tired after interviewing a horde of would-be stars, and perhaps they were just sick of being asked the same questions over and over, but the Idol judges seemed to be reading their answers off cue cards. Replies were carefully balanced between in-character banter and smiley-faced reassurance, especially by Cowell and diminutive "nice" judge Paula Abdul.

Finally, during a lull in the proceedings, I cornered host Ryan Seacrest and asked if he had noticed anything different about the people at the Austin stop, or were they really all the same? "Oh, yeah. I was expecting a lot more rock-oriented auditions, what with all the bands here," he admitted. "With the reputation this town has, I was surprised that people trying out did mostly pop." The irony is, of course, that most of the local live music community passed on Idol, leaving the path free for those hoping for the straight line to fame. Typical among the winning entrants was Dana Clark (see the Screens section for more on her), the 23-year-old local who won a guaranteed audition spot via a series of radio/TV sponsored contests, which Chronicle TV reporter Belinda Acosta and I helped judge. From there, she continued to impress the judges enough to make it to the finals. Clark was the ideal picture of "local gal does good," bringing a coterie of family and friends to the Hyatt and then heading straight off to Sunday church services after her winning performance.

Certainly there are tales of somewhat eccentric types populating the audition lines, and one (unsuccessful) contestant was seen leaving the elevator wearing a "Keep Austin Weird" T-shirt. The press jumped on the story about a man who made his audition despite the fact that his wife was due to give birth in two hours; the Dallas Morning News, meanwhile, profiled a Fort Worth woman who postponed her honeymoon in order to get from her wedding to her Idol audition. At the Hyatt, reporters passed around the story of a man who supposedly walked from Kyle to the audition (!) and was less than happy when he didn't make the cut. One young man was said to have received a thumbs-up from the judges just for being the only person with enough nerve to actually pick "Free Bird" as his performance. Aging punk and troublemaker Jimmy Bradshaw says he tried sneaking by the age requirement (24 or younger) and repeatedly attempted to net an audition, but was rebuffed. "At one point, I believe the police were called," he says. (No one I spoke to on the show's staff recalled any such incident.) Still, when asked whether there was anyone who lived up to the first season's notable crackpot Tamika, the judges replied that there was one person who tried a little too hard to be Tamika. It would appear that even when it comes to being awful, originality counts!

While the American Idol losers lick their wounds, and the winners wait for the next step, there's news for those who chose the long, hard (normal) way to fame this week. South by Southwest Creative Director Brent Grulke reports that this year promises to break records for the number of acts applying for showcases, despite the fact that at press time the final deadline had not quite yet passed. "Not only do I think the record will be broken," says Grulke, "I have reason to believe it will be totally shattered!" Where SXSW has previously drawn around 4,500 potential showcasers, this year it looks as though the number will pass 6,000 before the final count is made, and Grulke is at a loss to explain why. Unfortunately, the increased number of applicants doesn't mean there will be an increase in the number of showcases. In recent years, that number has averaged around 1,000, and Grulke says that while arrangements for SXSW 2003 clubs are still in the works, the number of showcases will definitely not be increasing this year. Hmmm, maybe you hard-working musicians shoulda followed Jimmy Bradshaw's example. Or not.

As chair of Austin's Music Commission, Kevin Connor gave City Council members a polite but pointed earful last week about another, less popular city board. "Popular musicians over the past several years have been routinely ignored when they applied for a grant from the Arts Commission," Connor complained. "It's not considered art, and I would venture to say that rock & roll is art. Country music is art. Especially here in Austin, Texas." Connor's concerns are timely, as the city plows through what leaders keep saying is a major overhaul of the city's controversial arts funding process. Council Member Betty Dunkerley chimed in with her endorsement as well, saying, "I too believe this music is worthy of our funding consideration, so I want to get it into the mix." Connor says the city manager and the majority of the council now "get it" when it comes to the importance of live music to the city's economy. "Now we have to come to them with a concrete plan on how to work things out," he says.

In additional tube talk, Austin City Limits is certainly making good on its promise to diversify this year. It was reasonably safe to add a popular act like Beck to the list (though he looked like he had just woken up in time for his taping on Monday night), but now the ACL gang has added a Spoon taping on Dec. 3 -- the last taping of the year. Actually, considering how much press (Rolling Stone, SPIN, etc.) and CMJ chart action Spoon's Kill the Moonlight has been seeing, Britt Daniel is also a safe bet. One act that has already taped an ACL episode this season is the Flatlanders, who are making a return visit to the MSNBC-syndicated radio program Imus in the Morning on Monday, starting at approximately 7:27am. Accompanied by guitarist Robbie Gjersoe, they'll perform several songs off Now Again, which, thanks in part to their initial Imus appearance, has now sold approximately 80,000 copies. After the show, the Flatlanders leave for dates in England, Ireland, and Scotland before returning home for Thanksgiving.

Delbert McClinton has had smooth sailing of late, with his album Room to Breathe sitting at No. 1 on both the Billboard blues chart and the Americana Airplay chart. Small wonder, then, that he's preparing for next year's Sandy Beaches Cruise. Now in its ninth year, the cruise sails from Tampa, Fla., Jan. 11 and features Del McCoury, Bonnie Bramlett, the Derailers, Marcia Ball, Tommy Castro, Wayne Toups & Zydecajun, Stephen Bruton, Miles Zuniga, and Bruce Channel, the guy whose band McClinton was in when he toured with the Beatles all those years ago. For more info, check out www.delbert.com... Starting at 7pm Saturday evening, Serranos at Symphony Square hosts the second annual "Jammin' for a Cure," with live music from Roger Wilco, Sidewall, and Jimmy LaFave. Proceeds benefit the Leukemia & Lymphoma Society. Then on Sunday, there's a blues party to help raise money for KOOP from 4-8pm at Antone's, with Gary Clark Jr., Richard Earl, L'amant Nelson Norwood, and Aubrey Nash... Anti-rave fever hit another ridiculous point a couple weeks ago, this time in Racine, Wis., when a nonprofit fundraising event that featured electronic music was raided and three people in attendance were arrested on drug charges. In addition, the officers wrote $430,760 worth of citations to 445 attendees with a penalty of $968 each for being "patrons of a disorderly house." Go to www.hauntedhouseparty.com for info on this latest debacle and instructions on how to fight increasingly draconian laws...