The Strokes: the only band that matters 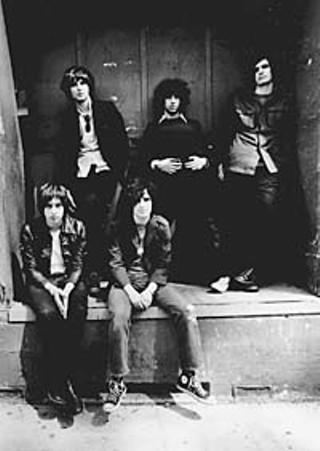 They've been on Jay and Dave and Conan and SNL, and generated a pile of press clippings thick enough to stop armor-piercing bullets. They've headlined the Reading Festival and opened for the Stones, and no self-respecting rock publication would be complete without an update on their latest alcohol-fueled escapades. Courtney Love tried to hop on their gravy train a while back by writing the song "But Julian, I'm a Little Older Than You" -- adapted from its earlier working title "But Julian, My Babysitter's Older Than You."

Yet, even after all that, the Strokes did not truly arrive until last month, when they were immortalized in song by former tourmates the Donnas. "Dirty Denim," from the Bay Area punk chicks' album Spend the Night, contains these telltale lines:

You look like you only slept for an hour

Your pants are slung way too low

I wonder why you're so moody

Is it 'cause you've got no booty?

To be fair, the Donnas never actually mention the Strokes by name. They don't have to. The five Manhattan twentysomethings have gone from East Village obscurity to 21st-century archetypes with DSL-like speed. They've stepped directly into the center of the hype vortex recently vacated by the Britney/'N Sync-led Radio Disney revolution. In a sense, the Strokes are simply a different type of boy band.

Just look at the way they've made the media cream their collective jeans. Here, at last, all the reviews say, is a band we can shamelessly fawn over and not hate ourselves in the morning. No less an éminence grise than Kurt Loder wrote in New York magazine, "New Yorkers who've spent the past 31 years mourning the demise of the Velvet Underground were moved nearly to tears this year by the rise of the Strokes." So that's why he always wore black on those MTV News updates.

Back in the real world, or at least within cell-phone range, the Strokes are still on tour for 2001's debut Is This It, which they've been supporting since before anyone outside the CIA and SEC had heard of al Qaeda or Enron. As their motel-on-wheels nears Portland, Ore., drummer Fabrizio Moretti is sound asleep; guitarist Nick Valensi challenges the Xbox genie to a round of video boxing; and Afro-sporting, suit-wearing guitarist Albert Hammond Jr. lounges on the couch and reflects on his band's surreal year of "entering the music scene at higher and higher levels."

Austin Chronicle: Is the band's reputation for partying accurate or exaggerated?

Albert Hammond Jr.: I would just say that we work very hard, and when we party, we do that pretty well as well. But it's not 24/7 or anything.

AC: How far along is the second album?

AHJ: Well, we haven't gone to the studio, but it's two-fifths written. I think in December, January we'll take some time to write and probably go into the studio sometime at the beginning of next year.

AC: Do you get recognized on the street?

AHJ: Sometimes, yeah. It's not like it's a problem or anything. I don't think we're really that big where it would be a problem, but definitely, sometimes we do, yeah.

The Strokes might get recognized more often if they spent more time at home, because in terms of esteemed New York figureheads, they currently trail only ex-Mayor Rudolph Giuliani and the Yankees. (Actually, after Clemens and Co.'s playoff loss to Anaheim, the Tousled Ones may have moved up.) The New York Times Magazine illustrated exactly how starved the city was for new musical heroes by selecting the Strokes as the sound of the city in its recent "State of New York" issue.

It's not hard to see why: The last bona fide hit band to come out of the Apple was Blondie more than a generation ago. NYC has repaid them by coughing up enough even newer groups like the Yeah Yeah Yeahs, Liars, Interpol, and Longwave to momentarily shift the epicenter of musical cool back to the Bowery. Wisely, the Strokes refuse to accept credit or blame.

AC: How do you feel about all the attention being paid to New York bands right now?

AHJ: I think it's good. I think it's a chance for some good bands that are in New York to have a better chance for people to listen to them, but I don't think it really matters. When a band comes out of a place, I don't think you should go check out that place. Every place has good music.

AC: Are you guys tight with any other bands up there?

AHJ: Not really. We're friends with Adam Green, the Moldy Peaches, Ryan Adams. Not like best friends. We know the people, but it's not like the bands in question hang out.

The Strokes reserve the "best friends" appellation for each other and engage in frequent public displays of affection. With tongue.

AC: So what's up with the kissing?

AC: I was just wondering how it started.

AHJ: I think it got misinterpreted in magazines and stuff like that. It's not what people think it is.

AC: Who started it?

I'm teasing him because he's right next to me. We're all just like really friendly; it's not like we're making out with each other. I don't know ... stupid things happen when you're with your good friends and you're drunk.

AC: What do you do to relax?

AHJ: Make out with the band. Just joking.

Is This It is a good record, not a great one. For some reason, many critics -- especially those who share the Strokes' area code -- insist its obvious debt to bygone rock luminaries is its greatest asset; at least one Velvet Underground reference appears mandatory, plus one from a buffet of Television, the New York Dolls, or the Ramones (for the jackets, presumably). There's no question the album is steeped in a shambolic urban mash of jangled nerves and ice-water veins, but otherwise the allusions are a decade off.

Overall, the sound hews far closer to Eighties demigods the Pixies, the Smiths, New Order, and the Cure. Remember, the Strokes were first worshipped in Britain. Sometimes the homage borders on plagiarism -- the first eight bars of "Last Nite" are identical to Tom Petty's "American Girl" -- but if the Strokes' chords were originally other people's, their energy and enthusiasm have always been their own.

That enthusiasm, so evident on "Hard to Explain," "The Modern Age," "Take It or Leave It," and deleted firecracker "New York City Cops," has not only spread to the media, it's stirred up a rising tide of ragged rock that has so far lifted the White Stripes, the Vines, and practically the entire nation of Sweden to a prominence they may have fantasized about but never expected. Not bad for five guys who have yet to master the finer points of personal grooming.

AC: Why is there such an appetite for rock right now?

AHJ: I couldn't tell you, really. I don't know. In terms of us, I think people like playing our songs; it makes them feel good. It makes me feel good.

AC: Do you think you guys were ever in danger of becoming overexposed?

AHJ: No. I don't think so. I think we'll keep on making better music, so it won't really matter.

AC: How do you keep all the things people say and write about you from going to your head?

AHJ: I don't read much. When I do, it's funny, because in interviews I feel like an idiot, really, talking about things. I wish I could express myself better sometimes when it comes to describing things.

AC: What do you think you'd be doing if you weren't in the Strokes?

AHJ: Working at the Playboy Mansion. As an in-house photographer.

I don't know. Probably trying to get a job somewhere. I'd probably be done with school or would have just left anyway and had to get a job. Who knows?

The Strokes play the Austin Music Hall on Sunday, Nov. 17.