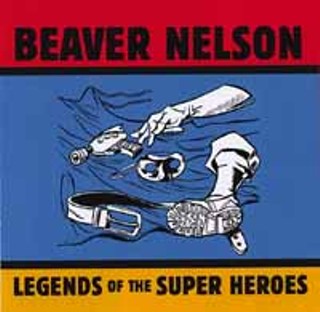 Legends of the Super Heroes (Freedom)

Superman and Batman, according to the scrapbook photos on Beaver Nelson's fourth and best album. His little boy in the red cape, Beaver in blue. Seeing that Legends of the Super Heroes is number four out of the chute since 1998 for Austin's Raggedy Man, Beaver should have the "S" emblazoned across his chest. After all, it's a measure of full bloom when new chapters in an artist's canon cause wholesale reappraisal of an entire body of work, and Super Heroes makes Nelson's debut (The Last Hurrah) and follow-up Little Brother -- critical successes both -- look like the works of a mere mortal. No such Achilles' heel here, just an empty phone booth and a pile of clothes. The DJ Shadow/"Losing My Religion"/"Train in Vain" intro to plaintive opener "Clean It Up" sets a standard that leaves the rest of Legends leaping the Austin skyline in a single bound. "Digging a Well," with its L.A.-1967 twinkle and blue-collar chorus, couldn't be any more endearing, while "Anything Easy Left" follows with a honeyed strum and a superhuman spirit ("Every time I feel poor, I think of something grand in the world"). "Chameleon Brain" can only be described as one of those songs waiting for the chosen songwriter to channel it out of the ether; "Government Sanctioned Hayride," for its part, is as catchy as the aforementioned R.E.M. tune -- the standout on an album full of them. Toward the end, "It Seems So Simple" creaks with Nelson's smiling-eyed sincerity, lacking only an open guitar case sprinkled with change for true appreciation. "[Super Heroes isn't] what you would expect if you're already a fan," writes Nelson in the booklet. Maybe not, but it's what we'll come to expect, Batman.