American Idol comes to town, the Funk Bros leave -- a little poorer for the musical wear and tear. 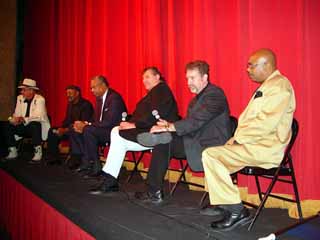 Considering that two of the top three contestants (including the winner!) of American Idol's debut year were Texans, is it any surprise that for the show's sophomore outing producers chose Austin as one of seven cities where next year's potential superstars are being mined? Especially when you think about the fact that Dallas-based (well, Burleson, actually) 2002 champ Kelly Clarkson actually broke the Billboard chart record for speedy ascension to No. 1 with her debut single, the poorly written treacle-fest "A Moment Like This." Entertainment Weekly proclaims on this week's cover that not all is rosy in that arena, announcing there's a "delay on the new [Clarkson] CD," originally scheduled for release next month and now set for an early 2003 release. Meanwhile, inside, EW informs readers that the Idol CD deluge is "just around the corner," with a 14-song disc featuring the top 10 finalists' renditions of their favorite TV series numbers. Here in Austin, Idolmania is in full swing -- just in case you were wondering about that line around the block at the Hard Rock last week. Five local radio stations (KASE 101, BEAT 104.3, 101X, 96.7KISS FM, and MEGA 93.3) have been holding competitions for an audition on the show. Yours truly helped judge the BEAT's contest, and was amazed at how many Austin kids have perfect pitch and how few have good musical taste. The Fox 7 "Austin Idol Search" finals are on Monday, and the general American Idol auditions will be held Nov. 6. Fox 7 will run the finals 7-9pm live, in which the five contestants will each sing one song a cappella, then perform with a music track. Both selections will be songs of their choice. The judges (George Couri from Capital Sports and Entertainment, Fox 7 reporter Diane Quest, Mark Morris of Dynamite Hack, and Chronicle TV columnist Belinda Acosta) will be offering comments and criticism following each performance. Judging will be based on "style, look, talent, and ability," with the winner being announced Tuesday morning on Fox 7 News between 7 and 8am live. Open auditions for Nov. 6 will be a cattle call, and there will no doubt be a stampede; in Detroit, the first audition city, 6,000 would-be Idols showed up. Says Fox's Kathy Smith, "From what I can tell, they line up and are picked out of line to audition. Austin is the only audition city in Texas, so it's going to be a madhouse." American Idol 2 is scheduled to begin airing sometime this winter, and Variety has reported that snide judge Simon Cowell has already inked a deal to return. Complete info can be found at www.idolonfox.com.

The Good, the Bad, and the Funky

Compared to sitting through 50 amateurs belting out Journey and Celine Dion covers, you'd think local musicians fronting a conglomeration of Motown's original backing band, the Funk Brothers, would be spectacular. That's what happened last Thursday at the Paramount, following the Austin Film Festival's premiere of the new Motown doc, Standing in the Shadows of Motown. Instead of stellar performances, however, one insider who was there called the event, featuring Tony Scalzo ("Ain't Too Proud to Beg"), Shawn Colvin, Leeann Atherton, Toni Price, Floramay Holliday ("Stop in the Name of Love," "You Really Got a Hold on Me"), Jimmy LaFave ("My Girl"), and Ray Benson ("What's Goin' On") a "train wreck," each song sounding more like bad karaoke than the previous one. That's a shame, because these legendary (if long-anonymous) musicians deserved better, but apparently the vocalists were not really at fault, having been called together at the last minute. "Oh, it was the very last minute," says Benson, adding "It was also very cool!" Seems there was no harm done to the Funk Bros' feelings either. "They felt honored," says Allan "Dr. Licks" Slutsky, the producer of Standing in the Shadows of Motown whose book of the same name inspired the entire project. "I don't even think they were listening to the quality of the music. With the film, so many people turned us down, and even now, we've got the world debut of the film Nov. 7 at the Apollo. We hit 125 people already and got 125 'no's ... To me, the stars that we had [at the Paramount] were heroes, because they got it -- they were honored to play with these guys. There wasn't much of a crowd, there wasn't much time to do anything, it was just thrown together. But I think the guys were touched that somebody wanted to sing with them." Guitarist Eddie Willis agreed. "My hat's off to them, the singers," enthused Willis. "They came up there with not much preparation, but they were so fired up that once they got onstage, it didn't matter what the hell they were gonna sing, or how they were gonna sound."

Even before the expected onslaught of American Idol, Austin has been getting musical mentions in the national media again. The Vanity Fair music issue on the stands now features the faux diary of a rock critic who's been unsuccessfully writing to SXSW hoping to get a gig as a panel moderator (I'll bet he's expecting them to pay for his plane ticket, too!). Equally amusing was the recent Saturday Night Live bit in which producer Lorne Michaels tried to get Sarah Michelle Gellar and Faith Hill to mud wrestle. When Michaels assured them that the stunt would be for charity, Hill shot back that, "That's what they said at Austin City Limits!"... "I'm happy with the festival," says Harold McMillan, referring to the DiverseArts/Katz's-sponsored 14th Annual Jazz and Arts Festival held last Sunday at Symphony Square (see Live Shot, p.70). Citing decent crowds, an excellent lineup, and great weather, McMillan says, "We're back on track toward building the festival up again." Now all he needs is more businesses to underwrite the proceedings -- and more people to attend them... The members of Wan Santo Condo are no less thrilled to be opening for Aerosmith and the Stone Temple Pilots on Monday at the Verizon Amphitheater (Dave Derrick and Shawn Sahm will be doing a set as well, they tell me). The Wons just finished recording in New Orleans, and their latest tunes are currently in L.A. being mixed by Shawn Evans of Nine Inch Nails fame... Monte Warden has been dealing with some hot mixers and producers lately as well. He's been recording in L.A. with Chuck Reed (Beck) and Bruce Brody (Rickie Lee Jones). Warden need never record a note again, though, seeing how well his songwriting for others is doing. Travis Tritt's album that features Warden's "I Wish I Was Wrong" is just about to go triple platinum, and Michael Peterson is releasing the single "A Lesson in Goodbye," co-written by Warden, next week... Note that the next few weeks are bringing three new releases from Austin's Emperor Jones label. The acts -- none of them local -- are the Double U, Thuja, and Pip Proud & Tom Carter. The Aussie Proud is in the States for the first time, though it appears his recent stroke leaves him unable to perform as planned... Need an Armadillo World Headquarters fix and don't have access to the Austin Music Network? Go to www.billnarum.com and look around a little -- you'll find streaming video of Waylon Jennings, Freddie King, and Roy Buchanan at the AWH. Also, run by Michael Nesmith's place (www.videoranch.com) and you'll find he's recently added some MP3s of his own appearance at the 'Dillo in 1981... The Austin-Bergstrom International Airport live music program has a new sponsor in K-EYE TV, opening with a performance by W.C. Clark, 3:30-5:30pm on Friday, Nov. 1. With the station's sponsorship of bands on Wednesdays, Thursdays, and Fridays, the airport is now back to five solid days of live music during the week. It's for ticket-holding passengers only, however, so don't plan an outing there unless you've got somewhere to go...