The Ballad of El Molino 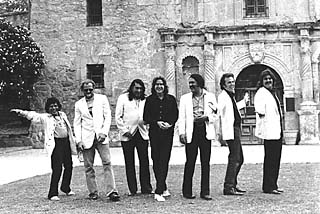 In Texas, it's damn near impossible to start a band so unscrewed that even hardcore fans shake their heads in wonder at the absurdity of it. After all, this is a state that helped invent Western swing (Bob Wills & the Texas Playboys), acid rock (the 13th Floor Elevators), blues rock (ZZ Top), cosmic cowboy (Freda & the Firedogs), and punk polka (Brave Combo). Texans have pretty much heard it all. When it comes to El Molino, however, not even its founder, one Joe "King" Carrasco, can make much sense of it today.

The year was 1976, and Carrasco was a young Anglo rocker who wanted to get in the thick of the East Austin Tex-Mex sound quick. He'd played in a few groups (Shorty y los Corvettes among them), and had even picked up a new last name, one given him in respect by one of his bandleader bosses. Carrasco knew that if he was going to make a splash, he had to have his own conjunto. So he did what any self-respecting Texan would do: He went out and stole someone else's. And it wasn't just anyone else's band. It was the mighty Doug Sahm's aggregation, which was simply one of the all-time greatest groups in the history of the whole damn Lone Star State.

In one brilliant, ballsy move, Carrasco got the kickingest combo around. The only catch was that hardly anyone had ever heard of him, and he couldn't find anywhere to play. Not one to be deterred by reality, the Ft.Worth-via-Dumas native headed straight for the mother lode, San Antonio, to make an album. Surely that would get him some headlines. Once he got the rather nefarious crew calling themselves El Molino situated in Zaz Studios, Carrasco and crew cut what has to be one of the best "lost" albums in Texas rock & roll history.

Consider the players. On tenor saxophone, Eracleo "Rocky" Morales had been a legend in San Antonio since almost before Carrasco was born. He was the kind of musician for whom other players lowered their voices to sing his praises, as if they were speaking of more than a mere mortal, a brujo of the barrio. The tenor king held serious sway off the bandstand as well, with an endless appetite for MD 20-20 wine and the occasional cheeseburger ripened for days in a coat pocket.

Morales' erstwhile blowing buddy, Charlie MacBurney, was the king of the trumpet players in a trumpet-player's town. He could play just about any song ever written, as well as wax rhapsodic about Clifford Brown, Kenny Dorham, or any number of other jazz trumpet titans. On keyboards, Arturo "Sauce" Gonzales had earned his nickname, getting his pick of gigs around San Antonio in the process.

Guitarist Ike Ritter was the captain of Austin stratospheric psychedelic rock, and capable of endless interplanetary hijinks. Dueling drummers Ernie "Murphey" Durawa had first played with Sahm in junior high, while Richard "eh eh" Elizondo had single-handedly invented a new language based on his nonsensical take on the universe. He also established a whole slew of penguin worshippers thanks to his nickname, "El Pinguino." Considering Elizondo stood at less than five feet, had a small hunchback, as well as a missing thumb on one hand (hence his famous hip handshake exhortation, "Gimme four, dude"), it's no surprise his reputation preceded him.

Bassist Speedy Sparks started his musical career as doorman at Austin's legendary Soap Creek Saloon, then let it slip one day he had a Fender P-bass in his closet. Farfisa organist David Mercer was the mystery man of the band, and quickly got dubbed the "tokin' straight." Add on a few other musicians here and there, including Sir Doug's right-hand bro Augie Meyers, and you had a lineup capable of just about anything: polkas, rancheras, double shuffles, cumbias, R&B, rock, misdemeanors, felonies, whatever.

Once the studio smoke cleared, Carrasco minted 5,000 albums and named the label after his girlfriend Lisa. Here's where I come in. The singer was going on an extended vacation in Europe with his mother, and needed someone to sublet his apartment at the end of 221é2 Street in the West Campus area. Needing a new place to live, I jumped at the chance to take over Casa Carrasco. Little did I know of the late-night musical visitors I would inherit, not to mention the entire pressing of his LP.

Asked what to do about the stockpile in the living room, Carrasco shrugged it off: "Sell 'em, I guess," he laughed. Easy for him to say. So he split town and I moved in, sharing space with bright red piles of records for the next three months, along with dealing with the nocturnal house calls. My favorite happened to be the one-eyed accordionist Esteban Jordan. It was easy to tell when he was about to knock: His huge black Chevy van could be heard and smelled a block away. When Carrasco finally returned, we laughed about the intricacies of the record business, something Carrasco hasn't spent much time worrying about since.

Gradually, all 5K albums got siphoned off to various record stores and writers, and proceeded to earn an underground reputation money can't buy. Carrasco himself switched to nuevo wavo for his next run at the charts, and christened his new band the Crowns. Most of El Molino went back to working for one of Sahm's many musical endeavors. I kept the apartment. The album all but disappeared after its initial 1978 release, resurfacing only as a cassette reissue on the ROIR label in 1989 until its Tornado Records CD debut this month, a label I've been lucky to be a part of.

In the best of worlds, now would be about the time for an El Molino reunion. Carrasco has lost none of his manic pursuit of rock & roll, but the fates haven't smiled quite as brightly for some of the other members of the band. Both Elizondo and Ritter have passed away, and MacBurney has blown his horn for the last time, retiring several years ago.

Morales is still going strong as leader of the Westside Horns, though, playing tenor solos that can curl your toes. Gonzales can be found in any number of S.A. bands, while Durawa and Sparks became MVPs on the Austin roots rock circuit decades ago. That leaves Mercer as the MIA musician, maybe because he never seemed crazy enough to fit in during the group's brief but bodacious life, anyway.

If there is a lesson to be learned from Joe "King" Carrasco's leap-of-faith beginnings in El Molino, it's that there's no idea too crazy to stop a hardheaded German-Texan from trying. It worked for Doug Sahm in 1964 when he called his group the Sir Douglas Quintet and pawned them off as being English, and it worked for Joe Teutsch when he changed his name to Carrasco.

That probably won't get any of this lot into the Rock & Roll Hall of Fame, but for those lucky enough to have caught their magic on any given night during the Seventies in a bar in Austin or Helotes, San Antonio or San Marcos, it's the perfect payoff for the pursuit of musical happiness. As El Pinguino would say: "muchos conjejos." Or something along those lines.