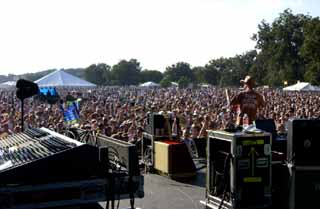 Terry Lickona looks out over his people. (Photo By Scott Newton)

Walking on the Sun

As the broiling Texas September bade adieu this year, there was for once no arguing with that notorious slogan "Live Music Capital of the World." A stranger driving through the streets of central Austin on Saturday and Sunday likely would have thought he'd arrived in a city of nomads, as everywhere one looked there were hordes of people, many with backpacks and beach towels in hand, headed for an event, or a shuttle to an event. Sixth Street's annual Pecan Street Festival reportedly drew thousands of cash-spending shoppers during the day, while Saturday night found big, sold-out shows at numerous clubs, from Queens of the Stone Age at Stubb's to Clinic at Emo's and on down to Soulive at the Mercury (where members of Los Lobos were seen enjoying their off-stage time). The festivities were prefaced Wednesday morning, when the ACL crew held a press conference by the Stevie Ray Vaughan statue and trotted out Ann Richards and Ray Benson to announce that the show had acquired its first major local underwriter, Schlotzsky's. The company is expected to prove an ideal match for the show, as they already feature numerous Austin performers in their television commercials, which saturated the airwaves during the festival.

For some, the fun started off early Friday night with Wilco's packed set at the Merc. Singer Jeff Tweedy, a lifelong migraine sufferer, walked from the Hyatt to the show with the idea that the exercise would do him good, but the plan backfired. Though he looked terrible, throwing up before and during the set, Tweedy and the band put on what they later said they thought was one of their best ever gigs (see "'ACL' Live Shots"). It didn't hurt that their manager, agent, and buddies the Jayhawks (not to mention Lance Armstrong) were in the audience for the two-and-a-half-hour songfest, and having the aforementioned 'Hawks join in for the encore didn't hurt either.

Saturday and Sunday out at Zilker Park were, needless to say, huge. So far estimates count some 40,000 attendees on Saturday and 35,000 on Sunday, exceeding the festival organizers' predictions by 15K. On the downside, those numbers, including a completely beyond-expectations 8,000 walk-ups on Saturday, meant a lot of people did a lot of waiting in the hot, 90-plus degree Texas sun. One angry attendee e-mailed this column with the following beefs: "Bought tickets several weeks ago, [and] was totally dismayed to find, at 12:30pm, that there was no parking in the state parking garage and that there was at least a two-hour wait for the shuttle even if you did park. We finally parked at a friend's house and got a ride to Zilker, only to find out that Will Call was 2,000 people deep, and then another couple of hours to get an arm band and another hour to get through security. Five hours of standing in line in the heat, just to get in." Organizer Charlie Jones doesn't duck the issue, estimating that "about 2,000 people got left with a bad taste in their mouth," mostly during that two-hour block early Saturday. "We learned a lot," he admits. "We won't be having that sort of thing happen again." ACL's Maury Sullivan adds that they appreciate all comments and suggestions, and they're soliciting more at info@aclfestival.com.

As certified "laminate scum," I could only observe and shed a tear for those caught in the ticket lines, yet on both days, I rode the shuttles like a regular citizen and never had more than a total of five minutes between parking, walking, and boarding the bus. A notably minimal police presence was a nice plus as well, with no squads of armed men in blue marching about hoping to bum out the pot smokers (of which there were a sizeable number), though another e-mailing patron reported some cop hassles on the premises: "Respecting the requests of all involved to not drive and park at the festival, I arranged to be dropped off at the festival on Sunday. We came down Barton Springs Road and turned left at the roadblock onto Robert E. Lee. Saturday our cab had dropped us here on the shoulder successfully and we intended to do the same Sunday afternoon. Unlike Saturday, the shoulder along Robert E. Lee had been made inaccessible with a row of traffic pylons. We pulled over where the shoulder began before the pylons, and before I could get out of the passenger seat, a bicycle cop that uniformed APD later identified as 'park police' approached us. Instead of being told 'Move along folks, keep it moving,' or something appropriate for the situation, the park police approached us with 'License and registration please,' -- he was issuing us a citation for pulling over. When we told him this was the same place our cab dropped us the day before, he responded, 'We're giving everyone tickets, all the cars, all the taxis.' Although clearly out of the way of southbound traffic, the driver was issued a $121 citation for 'impeding traffic.'"

For the majority, however, there was little more to the weekend besides sun, fun, and live music. Band-wise, things were close to astonishing, with rock solid, on time sets all 'round, little overlap (other than Robert Earl Keen's surprise performance), and excessive volume being the only real sound/production flaw in evidence. Both Jon Dee Graham and Joe McDermott commented from their respective stages on how much Kelly Willis there was in their mix, which was perhaps due to the fact that there's more of her now that she's pregnant with twins! Crowd-wise, none of the acts got short shrift, the smaller, niche-oriented American Originals stage benefited from being one of the too-few tented areas on the grounds. (The kiddie stage needed a tent as well.) There were amusing moments, like when Austin City Limits producer Terry Lickona announced Wilco as being so unpredictable that you never knew what they were going to sound like, and then instead of the band's first notes, up came a recording of Gene Wilder warbling "Pure Imagination" from the Willy Wonka and the Chocolate Factory soundtrack. That turned a few heads in confusion.

Ryan Adams turned daredevil on Sunday, commandeering one of the fest crew's golf carts and zooming dizzily about the field, doing errands and buzzing the populace. A series of Esquire magazine photo shoots at the event met with mixed results, as Jimmie Vaughan decided not to show up for his, and W.C. Clark, who had just driven all the way from Memphis, waited for his shot with Robert Randolph and Eric Johnson in the wrong area and ended up getting snapped solo instead. Ryan Adams zoomed up in his cart with time to spare for his shot with Emmylou Harris, though, and Abra Moore and Tift Merritt's shoot also apparently went off without a hitch. There was an industry side to things, too; festival booker Charles Attal says that some 25 agents from around the country were in attendance, and that most bands brought a lot of their business people along for the ride as well. By the time the Arc Angels began their festival-closing set, many weekend warriors had packed it in, though there were still event-sized crowds at Luna's Sunday sunset show, not to mention the mobs still sitting under the trees in the dark, as if still following the shade that had long ago been eclipsed by the night. The ACL staff reports that the park cleanup was surprisingly easy, as they finished up closing and prepared for a Monday taping with Robert Randolph and the Blind Boys of Alabama.

Earlier I noted organizer Jones' comment about lessons for the future, and you may have seen other sources saying that next year is already a lock for ACL Music Fest No. 2, but Jones says that's "not been confirmed at all." ACL's Sullivan and others are talking as though they will be, assuring that next time the shuttle, food, and wristband problems will be history. (This hasn't been confirmed, but one person told me that "Little Wing" was performed at least three times over the weekend -- let's see that that doesn't happen again either.) Austin City Limits producer Lickona says he still hasn't gotten to kibbitz with showmen Jones and Attal, but is prepared to utter at least one word: "October!"

Officially, Jones expects an announcement regarding further fests some time in November. Notably, the Chronicle's Andy Langer says that all of the bands he interviewed for Channel 8 News (around 30 of the 70 that performed) told him they would be back next year. Somebody better tell Jones and Attal that, 'cause they're the ones who have to figure out what to do with them!

The passing of Don Kalmbach led to tears for those close to Ginny's Little Longhorn, but spirits were considerably lightened when the club's closing following his unexpected death a couple of weeks ago from a heart attack was only for a short period of mourning. Dale Watson is said to have nearly bolted back to Austin in the middle of his European tour in order to help with affairs at the beloved venue. In any event, club staffers say things will continue as before at Ginny's... In other passings, Ian Moore, playing this Saturday at Antone's, is having a wake Oct. 7 at the Paramount in Santa Fe, N.M., for his father who passed away a couple of months ago. Relates Moore, "I was hoping to get the word out in Austin, as my dad spent quite a bit of his life there, and had many friends, some of whom may not yet know that he died. He was a pretty integral part of the Austin counterculture. His store, Anableps-Anableps, along with Oat Willies, Whole Foods, and Grok Books were part of an unofficial coalition that helped to create and sustain a more liberal and progressive atmosphere in the early- and mid-Seventies in Austin."