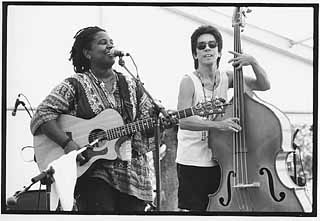 "We haven't been to Austin in a long time," was one of the first things Gillian Welch said from the stage. That was among the reasons she drew one of the largest audiences of the Austin City Limits Music Festival weekend. She and partner/guitarist David Rawlings didn't disappoint the gathered faithful, either. They laid down a set of songs in their unique combination of quiet, intense, and uplifting. Relying on tunes from 2001's Time (The Revelator), like the weighty "Elvis Presley Blues" and jaunty "I Want to Sing That Rock and Roll," Welch performed with a passion matching the heat of the Texas sun that beat down all weekend. At times, the music was trance-inducing, with a hypnotic simplicity that belied its power -- one that seemed to grip the crowd as they listened intently, a feat not to be overlooked given the circumstances. But then these were obviously fans, as they greeted some of Welch's older tunes like "Orphan Girl" and "Tear My Stillhouse Down" with hearty approval. Special mention should be made of Rawlings' performance, as he was wearing a black wool suit that must have been stifling in the heat. He demonstrated prodigious chops on a variety of stringed instruments, seemingly without breaking a sweat, and was particularly effective toward the end of the set when he laid out a burning solo that electrified the audience and led an encore of "I'll Fly Away" from the O Brother Where Art Thou? soundtrack that brought down the house.