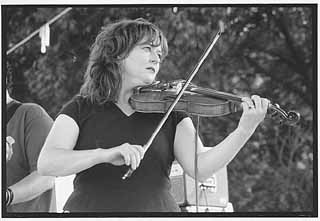 The Mighty Sincere Voices of Navasota

One downside of festival-shortened sets is that some artists -- particularly those accustomed to freer sets -- warm up just about the time they have to wrap up. While their first number was delivered with concentrated focus and intent, the Mighty Sincere Voices of Navasota were just such a band. Not because the gospel group needs to heat up; they must have been pretty balmy in their resplendent matching custom suits. Rather, the audience had to thaw to their message of making a joyful noise unto the Lord. The family-based, vocally driven octet, with keyboards, bass, drums, and two guitars, came out swinging, singing "There's No Harm in Praising the Lord," and "Save My Soul, Make Me Whole." Things were most certainly movin' by the fourth song, when the lead guitarist used a Cry Baby wah-wah pedal to pull wails from his SRV Strat, which was followed by a midtempo version of "Peace in the Valley." That was the last breather the audience got. The group's 63 year-old patriarch took the lead mic and ratcheted things up with a four-part harmony clapper. With his three sons backing, dear father pranced around the stage brimming with the Spirit, attracting cameras like shade draws folks in the summer. His son sang lead for the last tune, and as sure as the rhythm section's shirts were translucent with perspiration, the Good Word was delivered. An excellent way to start a festival. Next year, though, give these guys a longer set.