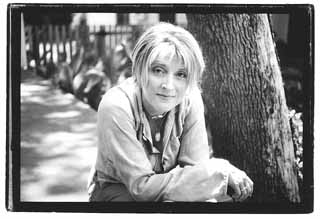 In the local headlines of the past few years, the talk has been about immigrants. You know: that influx of overcaffeinated geeks and gold diggers, whose Porsches and Range Rovers fight for the last valet parking spot at Sullivan's. Their tacky office buildings metastasized up and down MoPac even while their IPOs were transformed almost overnight into IOUs.

But while these New Economy upstarts flowered and flamed out, a quieter, more enduring, and potentially more important migration has been occurring. Austin has seen a slow but steady accretion of some of the best female singers and songwriters in the country.

Kim Richey is the latest addition to a distaff population of recent arrivals that includes Eliza Gilkyson, Patty Griffin, the three Dixie Chicks principals, Shawn Colvin, Caroline Herring, and Danni Leigh, all of whom have acquired an Austin ZIP code within the past few years.

Richey took to Austin in 1995, when she played South by Southwest on the heels of her eponymous debut on Mercury Records. She stayed at the Austin Motel and played across the street at the Continental Club, and it was love at first chord. She's been back many times since, playing the Saxon Pub, SXSW, Shady Grove's "Unplugged" series, and elsewhere. It was only recently, however, that she pulled up stakes from Nashville and relocated here within the past year.

As a songwriter, Richey won her spurs in Music City when Trisha Yearwood and Radney Foster recorded chart-topping versions of her songs ("Believe Me Baby (I Lied)" and "Nobody Wins," respectively). Time magazine called her third album, 1999's Glimmer, one of the year's best releases. Along with Beth Nielsen Chapman and Gretchen Peters, Richey was one of Nashville's principal go-to girls when it came to evocative, hook-driven, coolly literate, and insightful songs about love and endurance.

Since moving here, during her tenures between touring and recording, Richey has been metamorphosing into her own version of the quintessential Austinite. She's rented an apartment near UT, she's been searching for a favorite Mexican food joint, she's grazed the aisles at Central Market, and she's discovered locally celebrated fellow musicians ("Jimmy LaFave, Eliza Gilkyson, Alejandro Escovedo -- how come I haven't heard of these people?" she asks in wonderment).

"I think Austin is a really creative place, because you don't have all that industry pressure that Nashville has," posits Richey, and as an example, responds to a query from an imaginary record company weasel: "Is it a showcase? No, this isn't a showcase -- I'm just playin'."

And now she has somebody to play with. Richey's recruited a stellar band of young local talents (guitarist Patrick Matera, percussionist Michael Lontoria, keyboardist Stewart Cochran, and bassist Luis Guerra) to back her up on the road promoting her fourth album, the brand-spanking new-Lost Highway release, Rise.

She has been closeted at a rehearsal space at Music Lab for the best part of the week with the new band, working up the songs, when she sets aside one day for a back-to-back regimen of phone interviews to promote the new disc and accompanying tour.

"I got totally overwhelmed a couple of weeks ago," she confesses. "I moved here, but I still have this house I'm trying to pack up and rent out in Nashville, and I was trying to get a band together in a town where I didn't know anybody. And then, the record's coming out, and all that part of it is starting to gear up. And I was thinking, 'Now why did I think it was a good idea to do all of this at the same time?'"

Richey lets out a self-deprecating laugh. Hers is a lanky figure with a runner's build (she's currently training for the 3M Half Marathon), clad this afternoon in khakis and a bright orange T-shirt (not UT burnt orange, but give her time). Hers is a shag of blond hair, and she speaks with a broad Midwestern accent that betrays her Ohio origins.

She has the callused hands of a guitar player, and her nails are spotted with the chipped remnants of some distantly applied silver polish. She orders a concoction that looks like melted yellow Crayola and sits back to survey her surroundings on the patio at Shady Grove.

She'll be onstage the following night, performing in KGSR's "Unplugged at the Grove." (In the interest of disclosure, I should point out that I also work for Milam & Co., which books "Unplugged," and I in fact booked Richey for the gig myself -- long before this story was commissioned.) Although it was originally contracted as a solo gig, she's bringing her band to premiere her new album. It will be their first public performance.

"In Austin, more people play out with their bands," she observes. "In Nashville, you can't go outside without tripping over a 'Writers' Night' -- solo performances in the round. They're gonna have drive-through Writers' Nights before long."

Rise had its genesis in Bay Area groovers' paradise Mendocino, at the studio of producer Bill Bottrell, whose credits include Sheryl Crow's Tuesday Night Music Club and the eponymous I Am Shelby Lynne, among others. Originally, says Richey, she wanted an album title that revolved around "amber," because she felt the time spent writing and recording the album in Bottrell's Northern California enclave was a discrete and timeless period, unique to itself.

Perhaps that's the reason so many of the album's songs, "Girl in a Car," "Fading," "Reel Me In," and "Good Day Here," sound introspective, almost dreamy. Others, like the psychedelic-tinged "Electric Green," the Celtic/Middle Eastern fusion of "No Judges," and the lush, Caribbean dreamscape of "Without You," conjure up alternate realities. Matched alongside solidly commercial, ear-friendly tracks ("Me and You," "This Love," the album's first single, and the anthemic closer "Cowards in a Brave New World"), the songs on Rise coalesce into a diverse and multilayered whole.

Though highly regarded by peers, critics, and fans of the singer-songwriter's art, Richey herself has never made any significant impact on the charts. Rise may not change that, but then again, it might. Who, after all, ever heard of Sheryl Crow before producer Bottrell got hold of her? Richey's ambitions, like the goals of the characters in her songs, are optimistic but grounded.

"I'd like to sell some more records!" she asserts. "I'd like to sell enough records that I could tour comfortably without the record company having to kick in. I could have a bus, instead of schlepping around in a van, and play theatres and nice places."

"That's pretty much it.

"U.S. News and World Reports is doing an article that our publicity guy pitched to them," she continues. "All about incredible artists that have not had commercial success, and why haven't they?"

She laughs at her inclusion in the piece.

"Good news, bad news! Ah, baby ... We think you're creditable, but we're lumping you with the people who haven't had any success."

Over Richey's shoulder, a road crew toils away at Barton Springs Road reconstruction in the latest of an endless series of long, hot, humid summer days. The stink of tar and diesel smoke wafts by on the breeze. Richey's life suddenly seems very good by comparison.

"If you're pretty happy and you've got a good life, what are you supposed to get done?" queries this former waitress and bartender. "I'm pretty okay."

And right at home, apparently.