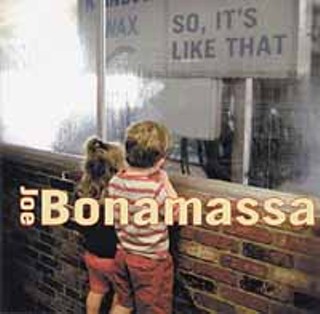 So, It's Like That (Medalist) With all due respect to the venerable bluesman, a seal of approval from B.B. King is as common as pubescent navels on the cover of Rolling Stone. New York native Joe Bonamassa is being celebrated as a blues guitarist, but So, It's Like That has more in common with Seventies bands like Bad Company (with whom Bonamassa has toured) than the estimable King. Bonamassa clearly has one ear turned to Southern rock ("My Mistake," "Pain and Sorrow") with its heavy blues base. "Unbroken" is a radio-friendly tune with a Dickey Betts-like feel, and "Mountain Time" is Lynyrd Skynyrd-y, while the ballads ("Never Say Goodbye," "Waiting for Me," "The Hard Way") are solid but undistinguished. Despite this, Bonamassa's potential is undeniable. He's a more-than-adept multi-instrumentalist, and "Lie #1" has radio written all over it. Bonamassa's also on his way to a distinctive style and has his ears open; if he listened to Wayne Bennett and played Lowell Fulson's "Tramp" every week in a club for three years, he'd come out blazing. Getting credit for doing your homework is not the same as getting good grades, but neither is Bonamassa a class clown. Give him extra credit for the heartfelt effort and check back often. (Saturday, Sept. 28, 7:15-8:15pm, American Original stage.)