Danny Crooks, down with the ship once again 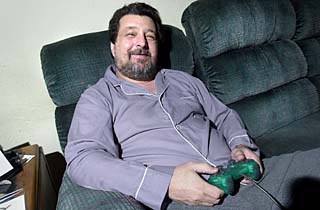 In a stunning announcement that came out of the blue, Steamboat owner Danny Crooks told his staff last Friday that after only six months at its new location, he was shutting down the venue. No, the reason wasn't anything to do with money or the TABC, Crooks claimed, it was his own failing health that led him to give up the Steamboat's ghost. "We were hoping it wouldn't come to this," says Crooks' son Sean Crooks, but between his Hepatitis C and recent asthma flare-ups, Danny felt the life of a club owner had become too much for him. "The employees said, 'We'd rather you close it down than kill yourself,'" he says. To those wondering how Crooks managed to look jovial and robust as little as a week ago, he says he simply put on a brave face. "It doesn't do any good to let people know you feel like you're dying," he explains. Just as suddenly as Crooks' original announcement, came the news two days later that Momo's/Six of Clubs owner Paul Oveisi would be taking over the reins and keeping the Steamboat alive -- and essentially unchanged. (Sounds like déjà vu to patrons of the Vibe, no doubt!) "We have the same philosophy of booking," says Oveisi, "and I'm keeping every single soul" of Crooks' Steamboat staff. So far, the switchover, which had not been completed at press time, has been astonishingly smooth -- with the notable exception of one Steamboat shareholder, who expressed concern about the proposed change of ownership. (Said shareholder, had given Crooks $75,000 in order for him to own the Steamboat moniker after the club closed down its Sixth Street location.) For his part, Oveisi says he's insisting that Crooks continues to make his presence known around the club as much as his health will allow. In fact, tonight (Thursday), is a special tribute to Crooks, featuring a performance by Del Castillo, the act that suggested to Crooks that he should get Oveisi to take over the club. As far as running a whopping three venues, Oveisi admits, "I've got a real handful now. I'm just lucky I've got a lot of good people working for me."

It took some 50 years for Soupy Sales' career to finally bring him to Austin, and he couldn't have picked a worse time for a Steamboat booking! "The closest I've come before was Houston and Dallas -- I did dinner theatre there," said the longtime game-show guest and pie-tossing comic on Monday. Plans didn't call for a lot of pastries to be tossed during the 76-year old Sales' scheduled appearance at Steamboat on Sept. 28; instead, the plot was for comedy from Sales and a video revue of his storied career. Unfortunately, a multimedia retrospective of an aging kiddie show host wasn't part of new owner Oveisi's commitment to effect no changes at the Steamboat. "It wasn't the kind of thing I would normally do," he explained, mere hours after getting word to Sales that the gig was a no-go. The final straw was the timing. Oveisi didn't like the idea of running a roadshow of any kind up against the Austin City Limits Music Festival juggernaut that weekend. As for Soupy, maybe he and Austinite son Hunt Sales will find another location for the show.

Maybe it's the good vibes coming from next weekend's Austin City Limits Music Festival, but further fests look to be popping up in the near future as well. Harold McMillan, after years of fiscally disappointing jazz festivals -- and a couple years of laying dormant -- has returned with his DiverseArts Jazz Festival, the first to feature a sponsor's name at the head of the poster. "Mark Katz came in at a sponsorship level high enough for us to put on a good show," McMillan says, though in no way is he saying that Katz is taking over the expenses single-handedly. Other sponsors for the event include fellow jazzbo's like the Creative Opportunity Orchestra, Epistrophy Arts, and Women in Jazz/HartBeat Productions. The 14th annual Austin Jazz & Arts Festival is set to run Oct. 16-20, with shows at various music venues around Austin, including Cipollina Italian Grill, Quack's 43rd Street Bakery, DiverseArts Little Gallery, and Symphony Square.

Shawn Sahm writes to say that although Johnny Cash's appearance Friday night was the undisputed highlight of the first annual Americana Music Awards show at the Hilton Suites Hotel in Nashville, it wasn't the only pleasant surprise of the evening. That night, Doug Sahm became the first recipient of the organization's President's Award. CMT/CMT.com Editorial Director Chet Flippo accepted the award (a Les Paul guitar neck embedded in a slab of pew taken from the old Grand Ole Opry) on behalf of Sahm's family. Also, Billy Joe Shaver picked up a lifetime achievement award in the songwriter category... Austin Songwriters Group is hosting an event on Sunday, 12:45-5pm, at the Mercury. "Your First Cut! A Step-by-Step Guide to Getting There" features songwriters/authors Jerry Vandiver ("For a Little While" by Tim McGraw) and Gracie Hollombe ("Mi Amante Ideal" by Jose Miguel) outlining the step-by-step process it takes to get your songs heard and recorded. They will be giving song evaluations as time allows, so bring a song on CD along with a lyric sheet. The cost for this event is $10 for ASG members or $15 for non-ASG members... Next Thursday, Sept. 26, SIMS (Services Invested in Musician Support) kicks off the sale of its "Music to Your Eyes" holiday card series featuring art by local musicians and artists Joe Ely, Sara Hickman, Ted Roddy, Sam Hurt, Kerry Awn, Ethan Azarian, and Julie Speed. Yard Dog Folk Art on South Congress Avenue will host a party with Ely, Hickman, Roddy, Hurt, and Awn Thursday, from 6 to 8pm. Proceeds from the sale of the cards will provide Austin musicians with access to low-cost mental health services... Former Goudie member Jimmy Messer has taken an interesting career change, stylistically. He's currently touring as a member of Enrique Iglesias' band. The combo will be parading through Texas during the first week of October, but as expected there's no Austin date -- probably the most convenient for local fans would be the Verizon Wireless Ampitheatre gig Oct. 5... Whether you're bummed over not being able to get into the recent Beck gig at Westlake High School or you're pissed at several rumored Austin Flaming Lips appearances that never happened, rejoice. The Lips will be touring with Beck and appearing as his backing band (besides doing a set of their own, of course), and tickets for the show, Nov. 12 at the Bass Concert Hall, go on sale Oct. 4 ... Oops! Someone gave me bum information last week about the Legendary Stardust Cowboy's local appearance. He'll be performing, but it'll be Sept. 30 at the Continental Club. Go and help him keep his pants up... A final plea for this week: Since my trombone-playing blowhard of a roommate bailed on me this month, I'm having an open house this Saturday and Sunday from noon to 6pm, during which I'll be hoping a prospective replacement comes along. More importantly to the vast majority of you, I'll be endeavoring to sell off the vast majority of the records, videotapes, zines, comic books, band fliers, posters, Fifties men's magazines, and piles more of the assorted pop-culture effluvia I've assembled over the past 20 to 30 years. Come to 1600-A Wheless (up the street from the City Market at the corner of 290 and Cameron) and take this junk off my hands. If I'm gonna give up and move into an apartment like everyone else, I'm gonna at least have to be able to fit into one...