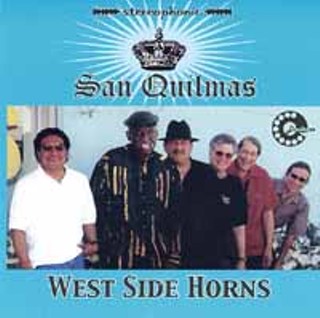 Within the first few bars of "Rainbow Riot," the opening track of the West Side Horns' San Quilmas, three great revelations came to me while getting reacquainted with the honey-dripping saxophones of Eracleo (Rocky) Morales, Spot Barnett, and Louis Bustos blending with Al Gomez' trumpet, Jack Barber's swinging bass, and Arturo (Sauce) Gonzalez's fat Hammond B-3 chops: 1.) Doug Sahm lives! The Horns defined Doug's puro San Antonio pachuco soul, and you can hear it right here. 2.) San Antonio Express-News music critic Jim Beal was right on comparing the West Side Horns to the Memphis Horns, and the reggae rhythms of Sly Dunbar and Robbie Shakespeare. They're that good, and that distinctive; worthy of the North Texas tenor tradition, articulated by Buster Smith and carried by David "Fathead" Newman, and the Honker & Shouter school, defined by Arnett Cobb and still practiced by Grady Gaines. The West Side Horns sound like San Antonio should, with roots firmly planted in the R&B and swing traditions of Aaron (T-Bone) Walker and Clarence (Gatemouth) Brown in particular, with a jalapeño con Big Red afterburn. 3.) They're pretty great taken on their own terms, especially with the added presence of Johnny Moeller on guitar and his brother Jay on drums. They traffic in a bluesy instrumental jazz-funk, where lead breaks are economical, short, and to the point, and all ears are first and foremost locked on the rhythm. Sort of like those other all-stars from Memphis, Booker T. & the MGs, if they'd grown up on El West Side: an obscure Freddy King instrumental ("High Rise") here, Joe Zawinul there ("Mercy, Mercy, Mercy"), and like-sounding originals ("Hit' N the Jug") sprinkled in. Thrice the formula is broken, when Morales vocalizes (quite well) in an earthy voice, recalling in verse and timbre the great Jimmy Reed, one of the first black bluesmen to find favor among white audiences in the south and Texas in the late Fifties and early Sixties (he influenced Delbert McClinton, Steve Miller, Augie Meyers, and Dusty Hill among others). Ever since he single-handedly revived the career of Freddy Fender with his searing solo on Sahm's version of "Wasted Days, Wasted Nights" more than 30 years ago, I've regarded Morales as the one of the best, if not my very favorite, horn player in the state. His sendup of Reed seals the deal, because he's got Jimmy, trashed-out and drawling, down cold. Rocky Morales is beyond cool. Rocky is hep. But on this recording, he's only among equals, because he stands next to Spot Barnett, the house band leader at the Ebony Club on San Antonio's east side, and the object of admiration of all three horns in the West Side Horns as teenagers as well as Doug. ("I used to want to be a pimp like Spot," Sahm told me almost three decades back.) Barnett came out of retirement at Sir Doug's behest in the mid-Nineties and has stuck around, his seasoned honks providing the anchor for the horns in more ways than one. In that respect, San Quilmas is really a piece of history, a continuum of Doug, T-Bone, Gatemouth, Freddy, Clifford Scott, and all the other arbiters of Texas jump blues pumped into the corpuscles of SA vatos. The breadth of their repertoire, always coolly danceable, and a pedigree of those they quote from underscore a greater, bittersweet truth that when the Horns finally hang it up, this kind of sound will be gone for good. Hear it while you can. It's the sound of roadhouses and jukes, dancing to the music so hard you can feel the whole joint shake. And while you're at it, you might want to work on those dance steps, too.