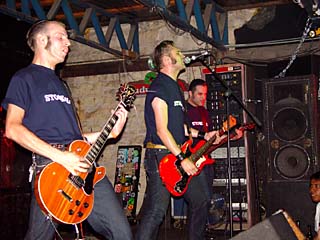 Labor Day weekend was a big holiday for some; certainly Johnny Law was prepared for it, with increased enforcement on the highways and squads of frightening APD blue meanies patrolling the Sixth Street area throughout the three days of holiday. However, as a big drink of water following a summerlong drought, it wasn't necessarily as refreshing as it could have been for local live music venues. With students back at UT, clubs that have been getting by on next to nothing these past three months had raised their hopes in the last week or so, but thus far, the most notable result of the kids' return has been an increase in TABC activity. A spate of serving-to-minors arrests during the last week of August attested to that, including one at Player's, one at a gas station, and a surprising one at Emo's in front of a packed night's audience there to see Pong. There have been murmurings of "setup" among some of the more scrupulous folks who received citations, but it's far more likely that the incidents fall under the dictum that nothing is foolproof because fools are so resourceful. In any case, the situation might have been less insulting had not injury been added by less-than-spectacular Labor Day attendance. In Emo's case, the Gearfest event Friday, Saturday, and Sunday had its own reasons for faltering; potential headliners the Hives elected to attend an MTV awards show instead of playing Austin, plus the Gearhead folks were unfamiliar with Austinites' outright refusal to pay a large cover charge -- $55 for three days. Though the streets were packed, the interiors of most entertainment district live music venues didn't seem to benefit all that much. Sad. Maybe everyone got their boating, tubing, and jet-skiing urges out of the way this week, and next week we'll see a resurgence for local music.

Battle of the Behemoths

In recent weeks, this column has reported news of two planned amphitheatres in the Cedar Park area. The question arises, however, of how one would affect the other. Our News department chimes in with a few words on the subject via Mike Clark-Madison, who observes that while Tim O'Connor is working with the Commissioners Court on their deal, Bryan Perez from SW Sports Group in Dallas is working on a sports-arena-plus-amphitheatre project with the city of Cedar Park. "The venue situation in Austin, particularly for the outdoor stuff, isn't all that robust, and it certainly makes more sense to add a new 3,000-4,000-seat arena north of town instead of south," says Madison. "But I have a hard time seeing two under-the-stars gigs within five miles from each other, so it's a safe assumption that only one of these venues will get built. Details about O'Connor's venture are still 'sketchy,' but it appears almost certain that a Cedar Park project would require a city-backed bond issue, and voters up there are already a little restless over paying the taxes that went with their last big bond elections. But Cedar Park leaders and Perez appear -- or appeared, before the O'Connor announcement at least -- hellbent on making that deal work. (They have lots of grand plans for Cedar Park.) Could it be that O'Connor has been brought in by the county -- which, in government-financial terms, probably has both more reason and more wherewithal to sponsor a deal than does the city of Cedar Park -- at this very juncture simply to kill the Perez/CP project?" The latest news is that the Cedar Park City Council is voting this week on whether to go ahead with their project; beyond that, as always with this sort of thing, we can only wait and watch.

The Haul of Records

Add the Austin Record Convention to the list of events that will no longer be taking place across from Auditorium Shores in the city's new Long Center complex there. Organizer Doug Hanners says, surprisingly, that it's not the rates being charged by the new post-Palmer Auditorium building that sent him packing. "It's the parking garage," crabs Hanners. "I'm not gonna put on shows there and make people pay $6-$7 to park." He further beefs that the garage doesn't allow people to leave for lunch and return without paying in full a second time. Instead, Hanners is moving to the Crockett Events Center at I-35 and U.S. 290 for the next Record Convention, Oct. 5-6. The new location will be smaller than people are used to (the Coliseum show last October was not the best ...), but Hanners is unconcerned. "The 300-pounders may have a little problem getting down the aisles," he shrugs. "[But] there's plenty of [parking] there, and it's all free!"

"There was a ton of dead space" where the old kitchen was torn out of La Zona Rosa, according to Direct Events' Kevin Brelsford, so look for a new bar to share the venue space. Plans call for the Backstage bar to be open seven days a week, catering to both pre-Zona/Music Hall show folks, as well as the crowd that's increasingly out on West Sixth Street where Katz's was once an island unto itself. Another club-within-a-club to check out is the new Hot Freaks, hidden discretely over Le Privilege. As we wait for them to start sending band info to our Club Listings department, one fan of the new dive calls it "like the seamy underbelly of the Hole in the Wall"... Willie Nelson once again proved himself a friend of the farmer after a fraud promoter announced a big Willie show in the little town of Crawford, Neb., and then bailed with the advance proceeds. Direct Events took over the reins of the show and put it on after all, with Willie, Billy Joe Shaver and Indigenous performing for the drought-stricken locals and a few thousand other area fans last Saturday... Speaking of Shaver, looks like New West isn't his only Texas label. Houston label Compadre Records has just announced the signing of Shaver, who began recording a new album in Austin this week, produced by R.S. Field. Look for a November 19 release... San Antonio Mayor Ed Garza has proclaimed Sunday, Oct. 13, 2002 as Doug Sahm Day in S.A. The daylong celebration will be held at Nelson W. Wolff Municipal Stadium, home of the San Antonio Missions. Festivities include a celebrity softball game, a concert featuring many of Doug's bandmates and colleagues, a fireworks display, and other events... Due to a scheduling conflict, the Alamo Drafthouse Cinema won't be screening The Navigator with Shorty Long next Thursday (Sept. 12). In its place, they're running a new print of Harold Lloyd's Safety Last with musical accompaniment by the Garreth Broesche Trio, a local jazz swing trio fronted by Broesche on mandolin and jazz guitar... You heard on the news a couple of weeks ago about the woman who shot her husband in the street and then committed suicide. You might not have heard that the husband was musician Tommy Elskes, however. Elskes suffered only a flesh wound in the arm and is apparently doing well... Today, Thursday, is one of the biggest fundraising days of the year for the SIMS Foundation (Services Invested in Musician Support), wherein a whopping 50% of sales at Shady Grove will help provide Austin musicians with access to low-cost mental health services. If you haven't gotten a SIMS benefit Day in the Life CD yet (featuring Pariah, Ugly Americans, Meat Puppets and many more), you might want to grab one at the Grove, since they're down to the last 100 or so and are expected to go at this event. The Grove's SIMS specials begin at 11am, and the event will conclude with "KGSR's Unplugged at the Grove" that evening with Bob Schneider... If you're partial to the piano, there'll be five of 'em lined up onstage for the Austin Music Network's last big recording project of the season. Marcia Ball, Floyd Domino, Nick Connelly, Riley Osborne, and Johnny Nicholas, along with special guests and "one brave drummer" perform at Antone's this Sunday, 6-9pm... Jason Andres, Bedbug guitarist/Casio-Nova, will be moving home to Dallas for a while. As a result, you can file the band in the "not playing out much" folder. However, expect a new Bedbug album early next year; the band plans on "keeping the doors open to pick up where we left off, or perhaps pick up new members and continue. If nothing else, we will certainly put out the record and play a record release show," says frontman Chris Hillen. One last gig before Andres leaves: Saturday at the Carousel Lounge with Sofa Kit XL and Fivehead, which will also be a benefit for Hillen and Fivehead drummer Davis Comeau, who lost thousands of dollars' worth of equipment and personal possessions in a Labor Day house fire.