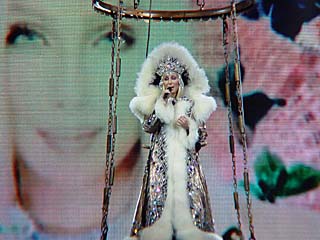 It was most disappointing that Cyndi Lauper canceled her performance due to an ankle injury, which occurred in Oklahoma City the evening I interviewed her. She was, in fact, the major attraction for me. It's not that I wasn't interested in Cher -- I knew it'd be a spectacle. Yet it was the pairing of Cyndi and Cher that seemed special. But c'est la vie, right? Especially since Cher's no slouch in the entertainment department; she's the ultimate entertainer with a longevity that's almost unparalleled in today's chew-'em-up-spit-'em-out industry. She's a monument to style over substance, and she dishes out the style like no one else. It was interesting that she chose U2's "I Still Haven't Found What I'm Looking For" as the opening song for what she claims is her farewell tour. As part of her alleged farewell tour, Saturday's show was very much a retrospective of her career, utilizing video images of earlier years and paying tribute to the entity that was Sonny & Cher. The lineup of songs was very much the soundtrack to my life. Not that I'm a particularly diehard fan, but I am a queen, and liking Cher (and Diana Ross) is sort of a requirement. The show was, of course, the dazzling fashion parade we've come to expect from Cher, with one spectacular Bob Mackie creation after another. Entrances were breathtaking, whether Cher was descending from the rafters in a cage-like apparatus, being borne on the shoulders of her dancers, or riding in an elaborately designed cloth elephant. The production owed a great deal to Madonna and Cirque du Soleil, underscoring the fact that rather than her being a leader, Cher is a reflection of the times -- and the reflection is dazzling to witness. Note to the folks at the Erwin Center: The front row center seats were to die for. Watching Cher perform six feet away was an amazing experience. These weren't $350 tickets, they were priceless.