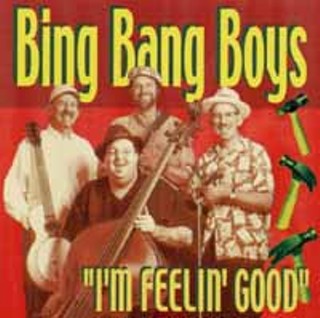 Austin bassist Mark Rubin is a musical journeyman who manages to make hopping across genres look deceptively easy. The Bing Bang Boys deliver a hodgepodge of American tunes from the early and mid-20th century, while Brian Marshall's Texas Kapela plies the acoustic front-porch music of Marshall's Texas Polish musical ancestors from farm towns like Bremond and Chapel Hill. Both CDs evolved out of idyllic front-porch jam sessions, an environment particularly well-suited to Rubin's myriad of musical interests. I'm Feelin' Good lives up to its title by focusing on upbeat songs played with friendly, infectious enthusiasm. Joining Rubin are Jere Canote and WB Reid on banjos and Greg Canote on fiddle. Everyone in the quartet pitches in on vocals, and while the range of songs, rags, and stomps necessitates a certain level of didacticism, learning about these songs from the Bing Bang Boys doesn't hurt a bit. Their rendition of the Shelton Brothers' 1935 song "That's a Habit" is a good-natured rib at perennially troublesome behavior, while "Chevrolet Car/Jackson Stomp" is a knee-snapping, uptempo medley featuring Rubin on tuba. Even more uplifting is "Don't You Remember the Time," a fiddle-and-vocal duet originally heard by the Boys on a Thirties' recording by Freeny's Barn Dance Band out of Mississippi. This sweet, starry-eyed waltz hits you right in the heart with a blissfully contented resonance that could make even the most hardened cynic acknowledge the existence of eternal love if only for three minutes. A similar sentiment, albeit a paternally directed one, can be discerned on Marshall's fiddle waltz "Ojeic Wielki (My Father)," even if you can't understand Polish. Although Marshall is best known as the leader of the Tomball-based Tex-Slavic Playboys dance band, the polkas and obereks here are all acoustic. Marshall, Rubin, and guitar/fiddle player Ron Kasowski play songs Marshall and Kasowski learned at the knees of their relatives and "village fiddlers" like Bremond's Steve Okonski and Bellville's Raymond Zievert. Presented in pure, unadorned fashion, songs like the lively "Krakowiak" and the raw, ribald drinking song "Tancowaly Dwa Michaly (Two Michaels Dancing)" give a compelling aural hint at what life might have been like when the day's work was done for Polish settlers in Texas.