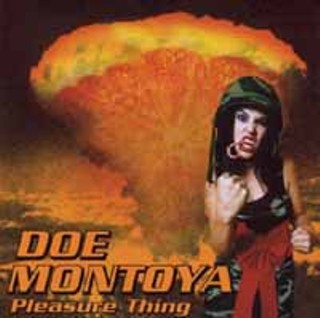 Pleasure Thing Doe Montoya is no stranger to the world of Austin rock, having served as one of the gorgeous backup girls to the Diamond Smugglers, as well as performing often with ex-Hickoid Davy Jones. She's no Anita Bryant wannabe, though, so if you're wondering what's with all the oranges on the cover, this album was originally issued a few months ago under the name of Montoya's band Go Juice. Consisting of Pocket FishRman Cris Burns, Offenders drummer Pat Doyle, and Julien Smith on bass, the band has no shortage of go juice, and under the knobs of veteran producer Burns, Pleasure Thing has a fire welling up within it as well. Montoya's voice sometimes recalls local dyke-rocker Gretchen Phillips; the rest of the time it recalls any number of FM rock queens. The goal of the band is simply to kick ass, and that they do, always running hot despite the lyrics of Montoya's 10 self-penned tunes, such as "Chili Chili Baby" ("I'm a pop Popsicle, chilly Frigidaire!"). Sure, she heads into ballad territory on occasion, like with "Oh Should I" ("I'd rather be lost and lonely than have you by my side"), but Montoya and her Juice crew never entirely get off the rock track, not until they've squeezed every last drop out of it.