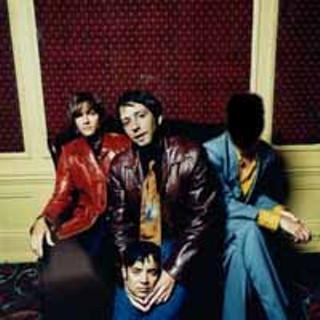 Where is Fastball headed?

If Jerry Jeff Walker's manager-wife Susan Walker has her way, Austin could have a real reason to be called the Live Music Capital of the World in the not-too-distant future. The Walkers are behind the Austin Consortium for Sound Development, a proposed school modeled after Sir Paul McCartney's Liverpool Institute for the Performing Arts. The couple's son Django graduated from the Liverpool Institute and brought the idea back with him, says Susan. She adds that the project has just chosen a development director, in the person of local grant-writing expert J.J. Baskin. Stephen Bruton, meanwhile, has been tapped to head up curriculum development. Next is the search for a school location (they have spotted a potential one downtown that they're "nuts over"), working on pulling a national board together, and fundraising to the tune of some $20 million. "What's great about [the Liverpool Academy] is that they teach the business side of things as well," says Walker, who especially champions the importance of learning about self-employment and taxes. "Jerry Jeff was in his 50s before he realized that -- and Willie [Nelson] still hasn't realized it!" Walker says she has "tons of support" already from artists who have offered to guest lecture, and adds that the school would also provide employment to local musicians who wish to teach full-time -- with a health plan included, no less. At this point, Walker concludes, "we're about 90% sure it's going to happen."

Another Round of Fastball?

It's been known for a while now that Miles Zuniga is no longer a member of former radio darlings Fastball, but beyond that the situation with the band has been somewhat of a mystery. At a recent Cactus Cafe gig showcasing the acoustic talents of both Zuniga and competing local popmeister Britt Daniel, Fastballer Joey Shuffield let it be known that it was time to reveal a bit more of the band's current and future scenario. It turns out that this wasn't the first time that Zuniga had wanted to quit, just the first time that Shuffield and Tony Scalzo didn't invoke contracts, etc., to stop him. Shuffield says the split left everyone on "very good terms -- Tony and I are huge fans of his music," and Zuniga freely signed off on letting the remaining members use the moniker Fastball, even though "legally, he could've given us trouble with the name." For those wondering why Zuniga should want to leave, keep in mind that while in Austin he may have been considered the group's main man, to the rest of the world, Scalzo is the one with the hits and the voice, and therefore is considered the heart of the band.

Zuniga currently lives in Nashville, where he mourns the fact that there are "no Vulcan Videos around" and spends his time penning new tunes, either alone or with other Nashville song-sellers. Shuffield and Scalzo, meanwhile, are determined to "make this a local band" again and are looking for an appropriate Austin-based replacement for Miles. They've been recording as a duo (with some help from Kevin Lovejoy) while they search, and just finished six new songs. What of the recent Steamboat show that never happened? "We basically jumped the gun," says Shuffield, apologizing to Danny Crooks between breaths. And what of the Young Heart Attack, the Chris "Frenchie-- Smith-led project that both remaining Fastball members currently play with? Well, when Scalzo joined up with that act more than a year ago, Shuffield says, "we had spare time." He admits it used to piss him off anyhow, thinking that the time could've been used toward furthering Fastball's pursuits, but he realized that Scalzo was having fun doing keyboards and background vocals "instead of being 'the guy.'" Then, last March, Shuffield was asked to fill in on drums with the Attack as well, and now he says things are heating up for that band, in the UK at least. They've signed over there with XL Recordings, are getting mucho press from the likes of Kerrang, The Face, and NME (go to nme.com to hear a demo of YHA's "Mouth Full of Love") and have been asked to play a BBC Radio festival program. So what are Shuffield and Scalzo's priorities for the future? While recording continues apace for Fastball, Shuffield admits that "I try not to look too far in the future. I try to go with the flow -- and definitely things are flowing right now for the Young Heart Attack."

Caroline Herring will be leaving Austin soon -- but don't think that means she won't be playing here. Herring and her new hubby were attending UT, but now both native Mississippians are moving to Washington, D.C., as hubby takes a teaching job there and she concentrates on national touring. Recent gigs include the Newport Folk Festival (the same day as Bob Dylan) and upcoming recording work is an album with Rich Brotherton producing. The couple plans to return to Austin for good in a year.

Continental Records is issuing Ted Roddy and the King Conjure Orchestra's Channelin' E: In the Spirit of the Memphis King. The disc showcases 13 songs never released by the King but done in a style similar to his 1969 American Studio period of recordings. Songwriters represented include Mickey Newbury, Bob Dylan, Tom T. Hall, Burt Bacharach and Hal David, Phil Spector, Ellie Greenwich, Jeff Barry, Bobbie Gentry, and Dallas Frazier. That ain't the only tribute in town, of course. The Continental Club has their 11th annual Buck Owens birthday bash going on this Monday night. Then on Tuesday, Wammo is hosting a Beatles Hoot Night at Antone's, and Wednesday at Stubb's, Grand Champeen will perform Cheap Trick's Live at Budokan in its entirety, in order, with every bit of stage chatter, note for note (sort of). Also on Wednesday, at the Hard Rock Cafe, the SIMS Foundation along with Oldies 103 and Hard Rock presents a tribute to Elvis Presley featuring performances by Jeff Hughes of Chaparral, David Beebe of El Orbits, Brent Gorrell of 47 Indians, Rick Barden of the Argyles, Paul Minor of Alterego, and surprise guests.

Spoon's new U.S. single, "Someone Something," is out now -- Merge has just released a 7-inch single for the song from the upcoming full-length Kill the Moonlight. Also look for a Britt Daniel/Bright Eyes EP -- four rock songs recorded by Daniel and Conor Oberst in an Omaha basement this past April -- due out on Ben Dickey's Post-Parlo label by the time the Spoon album is released Aug. 20, according to Daniel... Add the Brobdingnagian Bards to the list of Austin bands weird enough to get airplay on Dr. Demento's radio show (Z-102 Saturdays 6-8am). Last week the good Doc played their "Donald, Where's Your Trousers? Medley." No doubt when the next Lord of the Rings movie comes out, he'll be adding material from their upcoming J.R.R. Tolkien tribute album to his playlist as well... Shearwater has announced that the follow-up to their 2001 CD The Dissolving Room will be released this fall on NYC-based label Misra, home of the Mendoza Line, Destroyer, Jenny Toomey, and the Marshmallow Coast. Titled Everybody Makes Mistakes, the album was produced by Brian Beattie -- who also produced the most recent record of bandmembers Will Sheff and Jonathan Meiburg's other band, Okkervil River -- and features performances by Austin chamber trio Cinders and members of the Blue Noise Band. Everybody Makes Mistakes will be in stores Oct. 1... A reader asks what's up with the House of Blues and their recent purchase, South Park Meadows? Nothing that I can figure out -- the company has removed references to the Meadows from their Web site and seems to be in no hurry to return calls on the matter. On the other hand, note that Southwest Sports Group is reportedly trying to get a $20 million ice arena opened in Cedar Park, and that they have tentative plans to use that as a major concert venue as well. If anyone ever suggested I'd have to go to Cedar Park to see a big rock show, I'd have laughed in their face -- but we'll see... That globetrotting Jody Denberg just can't turn off his celebrity magnet. He spent last week in New York getting a Linda Thompson interview for one of his next interview discs (the other two subjects are the Flatlanders and Beth Orton). Then, in his spare time, he took in a special, semi-private Bruce Springsteen "dress rehearsal" show and had a nice chat with the Boss afterward; Bruce told him that so far he's only seen the Flatlanders' new stuff on TV, but he is champing at the bit to catch the album. Next up for Denberg: meeting up with David Bowie and Robert Plant. How does he find time to appear on the radio? Must all be pre-taped, I'll wager... This Sunday, noon to 10pm at the Pier on Lake Austin, Saucer, Feaker Speedback, Lesermore, Box Socials, Mingo Fishtrap, and Adult Rodeo all play a benefit for an assault victim... Why is Delbert McClinton's new album coming so soon on the heels of his last? He tells reporters, before "I didn't have the songs. But I had a really good last five years of writing. They've just been pouring out." So Room to Breathe will pour out onto the racks on Sept. 24... Oops!: Abra Moore's manager asks "What are you smoking?" regarding last week's item that her new single was a Sly Stone cover. Well -- ask my editor what he was smoking. I certainly didn't type that in! Oh, and never mind what ran in this column about Crystal Clear Sound last week. All that really has gone on is that they've given up their retail space and moved their offices. What's important is, all your master tapes are safe! Their new number, for your convenience, is 892-4830.