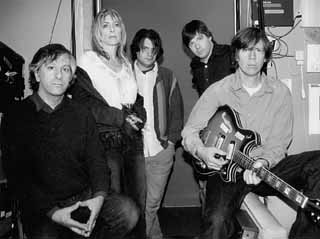 Ever since 2000's NYC Ghosts & Flowers went down as a disappointment, packs of hungry buzzards have been swarming overhead in all directions, eager to kill their idols.

Yet as punk's favorite art rockers edge closer to 50 -- pushing into their third decade of recording -- they've proven once again you don't have to be a kid to start a teenage riot. Murray Street, the latest in a long string of DGC releases, is Sonic Youth's best album in years, and their most scorching since 1992's Dirty.

They're also not too old to adopt a new cub, officially inducting Chicago producer/composer/all-purpose demigod Jim O'Rourke into their pantheon as fifth member. On Murray Street, O'Rourke spends much of his time on bass, allowing Kim Gordon to join Thurston Moore and Lee Ranaldo on extended jams like "Rain on Tin," an ever-widening motherboard of elliptical guitar lines that erupts into a cataclysmic din of floor-tom abuse, courtesy of Steve Shelley.

Moore's "Disconnection Notice" is a resonant piece of prose, equal parts Salinger and Philip K. Dick without ever trying too hard. Ranaldo keeps alive his streak of one truly excellent song per album with "Karen Revisited," which starts out every bit as peppy and memorable as Washing Machine's "Skip Tracer" before drifting into a long, abstract passage that takes a page from 1999's Goodbye 20th Century modern composer cover album.

Ranaldo, the angelheaded hipster laureate whose "Eric's Trip" put the dream in Daydream Nation, and whose feedback-drenched 'Mote' defined the cloudy surrealism of Goo, answered questions about Murray Street, New York trilogism, and 20-year-old songs from his hotel room in the land of pasta and Pompeii Italy before swinging Far East, then all the way to Austin for the second date on their North American tour.

Austin Chronicle: The circumstances surrounding the recording of Murray Street at the time of 9/11 make for quite a story in light of your studio being blocks from ground zero.

Lee Ranaldo: We were working on the album there in the studio in July and August. Come September 11, we kinda had to stop for two and a half months and make some repairs before we could move on. It was a big interruption, but the fact that our record got slowed down because of it wasn't really the biggest thing on anybody's mind at the time.

AC: O'Rourke was in the studio when it happened?

LR: Yeah, he was. He got out pretty quickly actually. He got out shortly after things started happening.

AC:With the album being well on its way at the time, how does 9/11 factor in with the theme of the album, which has been billed as the second in a trilogy about lower Manhattan's cultural history?

LR: Well, I have to tell you, that's sort of a fiction created by Byron Coley, who wrote the bio. We don't really have it in our plans to make this a New York trilogy thing. In some ways, all of our records have something to do with New York City.

We get a great inspiration out of the city, and certainly the last record was definitely about New York in particular. And I would say this one is far less about New York except for the fact that somehow events in September managed to give it this kind of odd context that maybe we didn't plan it to have.

And, you know, Byron's a good friend of ours, and sometimes it takes somebody outside of the band to see things a little clearer than you can, or to tell you what your stuff is all about. So who knows? It may turn out that we do write another record that has something very specific to do with New York. But it wasn't really our intention, let's put it that way.

AC: It seems that the last couple of records, going back to A Thousand Leaves, had this feeling of tribute or eulogy to things gone past, where the new one feels more of the moment, sort of how Daydream Nation or maybe Bad Moon Rising captured a certain moment. 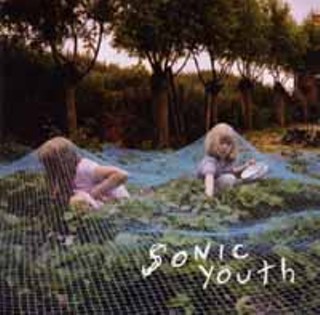 LR: I suppose in some regards it does have that kind of a feeling to it. I'm not sure how I would characterize the last couple of records, but I guess there is something going on with this record, even if it's just the excitement of having a new person in the band, and us wanting to write some real cohesive songs ... things like that. It's kind of hard to say.

AC: What prompts you after 20 years as a quartet to ask O'Rourke in, to add a fifth person? What difference has he made in your sound specifically?

LR: You know, nothing really prompted us. It just kinda happened. We were spending more and more time with Jim, and he was doing more and more things with us, and it just pretty much fell into place almost of its own volition in a lot of ways.

Suddenly there's an extra person's opinions in the mix, and an extra instrumental voice, and it's just kind of freed everybody up to be a little more spacious, and in some cases, it's allowed us to dig into some deeper harmonic, structural stuff.

AC: Can you tell me a little bit about your "Karen Revisited"? It's quite different from the first Karen, A Thousand Leaves' "Karen Koltrane."

LR: It's about the same character. That's the lyrical premise. Otherwise, I guess I would say it's sort of a musical exploration. On one hand, it's got this structural thing going on where the front of it's a fairly traditional verse-chorus structure, and then the back half of the song has a totally different approach, sort of an open-ended thing. It's also fairly structured, though more abstract.

It's kind of fun to play that way; it's almost schizophrenic. I picture it as being these two different interpretations of a subject where the first part has the words and everything is about this person, and the second part is more of a tone-poem approach to the same idea.

LR: I don't know. It just kind of works out that way. I suppose if I wanted to sing more of them I could. But I'm pretty comfortable doing one or two songs a record and letting Thurston have the bulk of them and Kim come up second. It's pretty much the way things shake out with us. It would be fun at some point to do a whole record of songs that I sang. That would be pretty cool.

AC: Do you have any plans for another solo album?

LR: We've been so busy since last year that it hasn't had a chance to happen, but it's definitely something that's on my mind. I've got another couple of projects that are probably going to have records soon.

I've been working with this group called Text of Light. It's me and another NYC guitar player, Alan Licht, and Christian Marclay and DJ Olive on turntables, William Hooker on drums, and a sax player from Germany named Ulrich Krieger. We play in front of films from the American avant-garde of the Fifties and Sixties, particularly pieces by Stan Brakhage, from whose film The Text of Light the band took its name.

We've been playing around for the past couple of years, and we've just recently done some recordings. I'm definitely very excited about that.

AC: Last time you played at Stubb's, you played "The Burning Spear." Planning on doing any really old stuff like that?

LR: We've been making an effort on this tour to relearn a bunch of songs we haven't played in a long time, hence stuff like "Skip Tracer" being in the set and a bunch of other different things from Daydream era and other records. It's hard to predict at this point. But we're definitely learning some different oldies.

AC: I've seen "Brother James" live but I've never heard you guys play anything off Confusion Is Sex. Any chance?