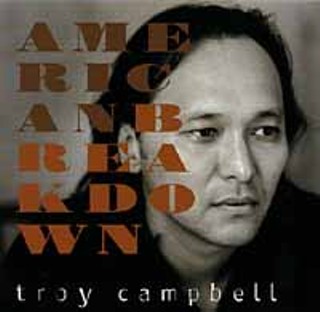 American Breakdown (M. Ray) With American Breakdown, his second solo album, former Loose Diamond Troy Campbell has finally made the album he's always seemed capable of but could never quite pull off. A great deal of credit for the success of this CD goes to the fine touch provided by producer Gurf Morlix. On a majority of American Breakdown's songs, Morlix is the sole credited musician, except for drums, and he plays with his trademark finesse and understated sensitivity. Meanwhile, Campbell has written some of the best songs of his career, singing them with a rare passion. Judging from the dark and weary tone of most of the songs, it's easy to hear that Campbell has been through a rough personal time. The imposing quiet yet forceful nature of songs like "Sorrytown" and "Pacific" are offset by the mountain stomp of "Rosabelle" and the energetic country rock flavored "Sad Truth." Underneath it all, Campbell sings about the bewilderment life often hands us, and the need to break those chains and emerge even stronger. As he sings on the disc's brooding title track, "When love breaks through, I count on you, to take me out of this place." American Breakdown is full of similar moments and proves Campbell to be a rare songwriter, one with a singular vision, a commanding way with words, and a knack for melodies that just won't quit.