Going away with the Flatlanders 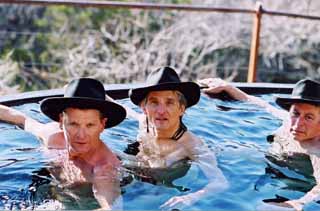 Photo By Will Van Overbeek

The green room is yellow. Naturally ... .

And commodious. Like the lavatories aboard Continental's Houston shuttle into LaGuardia. At least those were air-conditioned! Today's hospitality suite is yesteryear's hat check, and tonight, a pastel pound hyperventilating with stupid human tricks. St. Bernard preserve us.

That explains the barbershop quartet from Queens, perspiring in four-part harmony. One uses his straw boater to fan the trickles of sweat constricting his bow tie, while the other three beefeaters tug at their candy stripes and contemplate laying off the bratwurst. Me-me-me-me baritones slightly more bovine.

David Spade's vaudevillian understudy, meanwhile, already bumped from the program, digs through the welcome cookie basket with one hand, and balances a Tupperware container filled with eyeballs bobbing in formaldehyde atop a wheeled suitcase in the other. Like everyone else in the room, his eyes are Super-Glued on the breathtaking blond hooker towering toward the couch.

Central casting's idea of the model next door, it turns out she's no trickster. Try Howard Stern's girlfriend. Beauty and the beast. For The Late Show, her S.A.G. card's dealt her a prostitute, Dave's squeeze, and a random audience member. Scratched from the evening lineup, yet grateful for the freed time and pay, tall, bright, and congenial, wraps a cookie into a napkin for her grandmother. Call the vice squad, they've got Stern on a morals rap.

Tired of staring, Mr. Visine burps the lid of his sealed snack and pops an eyeball into his mouth. Oh. Ping-Pong balls in Listerine. Tilting his head back, he spouts an orange orb three feet into the air, and catches it in his blowhole. Again. Rotate in another ball. Another. Might as well do his schtick while he's here.

Out of his bag, he pulls a miniature bicycle, then a wheelie. The schmoe who lands on the show hours later by (not) blowing pennies into a jar with his nose couldn't sneeze this guy's mouthwash.

Street: Paul Schaffer slips in the side entrance undetected while a line curling around the block watches a union local wearing a moose suit unload an equipment truck. Behind it, the Flatlanders van skids to a stop and its occupants execute a perfect 'Hard Day's Night' dismount. They must be famous. The mob claps. 4:20pm.

Joe Ely tilts toward the mic and projects his stout Texas tenor out into Lenin's tomb.

"Now that I know everything that I know is wrong ... Am I right if I say I didn't know that you knew all along?"

Three acoustic guitars ripple beneath the lyric, warming the dark, sub-Arctic confines of the storied stagespace.

Biff Henderson scuttles across the stage.

"It feels so good I might be right where I belong."

Jimmie Dale Gilmore, center, and Butch Hancock, stage right, step forward into amplification, and with Ely, boom the campfire chorus of "Right Where I Belong."

Paul Schaffer, cornered behind his bank of keyboards, cups a harmonica between hand and mouth, and honks. Three hornmen on the riser in back of him respond with tonk. Joe and Butch deflank as Jimmie Dale canters through the second verse, then has it punctuated by his longtime collaborator Robbie Gjersoe's ricochet Fender break. Ely's beat keepers, bassist Gary Herman and drummer Rafael Gayol, break out grins. That's when the song skids to a halt. Schaffer looks up.

Sharon Ely, Joe's wife, and Amy Maner, an Austin filmmaker shooting a documentary on Lubbock, nod their approval down front of the plush auditorium. Back a row, Butch's spouse Adrienne doesn't need the applause sign overhead to prompt her enthusiastic reaction. Their 4-year-old son Rory, headfirst in his seat, entertains himself. An empty theatre responds with tacit indifference.

Forty minutes later, as 400-plus studio guests are Mirandaized about audience do's and don'ts under the hawkish gaze of Mr. Really Big Shoe's chalk caricature in the lobby ("no woo-hooing"), the Flatlanders run through "Right Where I Belong" yet again. Forty minutes to get a four-minute tune to time out at 3:30. Woo-hoo.

Although the contractor who hoists an NYPD sawhorse onto his chin exposes his profession's unlikely time-killer, he's no match for a Stephenville, Texas, teen who jumps rope though his multijointed arms. Yee-haw!

For his part, Minority Report-er Tom Cruise, unshaven and dressed for a Hollywood funeral -- black blazer, black T-shirt, black jeans, and work boots -- can't stop readjusting his pants throughout the segment, and hops through a few hoops of his own: Letterman's line of questioning on his braces. Commercial cutaways punch up Don Henley on the Late Show orchestra jukebox, first the Eagles' playboy creed "Life in the Fast Lane," then the Lone Star's "Boys of Summer."

The set change for the Flatlanders resembles an Olympic time trial -- gold in four minutes flat. When the on-air light blinks red, the show's gap-toothed host flashes the group's new disc, Now Again, up flies a screen concealing the band, and out stride three troubadours in shining black suits. Though he's already left the building, at that moment Tom Cruise never looked so shabby.

Even from the balcony, the Texas-sized twinkle in Ely's eyes is visible. Point man Jimmie Dale Gilmore, for his part, seems nervous; Butch Hancock gives off a mischievous glow. For three minutes and 30 seconds, then, the stage on which the Beatles made history is the Flatlanders'. Right where they belong.

"We had the Lubbock look!" beams Ely when complimented on the trio's flash attire. "I found that stuff in a Western store in Lubbock."

Actually, there's some question whether it's the suits or the matching, embroidered shirts that came from Buddy Holly's birthplace. The same Panhandle crossroads where Amarillo sons Ely and Gilmore roomed with their boyhood pal from Lubbock, Hancock, and from which they left for Nashville in 1971 to record Gilmore's debut. An album only pressed as a limited run 8-track tape until Rounder released The Flatlanders - "More a Legend Than a Band" in 1990.

"Now, we're more of a band," chuckles Ely. "Touring together these last two years has really made us a band."

Touring precipitated by a song commissioned for The Horse Whisperer soundtrack and performed on Letterman in 1998, "The South Wind of Summer." Asked if it's true the Flatlanders played the first Kerrville Folk Festival in 1970, Ely flashes a boyish affirmative.

"LBJ was at that first one," he says. "The year before he died, I think. He had let his hair grow long. He'd gotten so frustrated with Vietnam while in office that when his term ended, he started relating to the anti-war movement."

"Music was always a vehicle for people to get together," adds Gilmore. "It was the same way with us."

Must be why Now Again feels like it was written at a barbecue.

"A couple of those songs," agrees Gilmore, "right after we wrote them, we noticed they were sing-alongs. No matter what the songs, they're always that way."

Butch Hancock, taking it all in, leans over with a dry mutter.

"When I get back to Terlingua, I'm gonna have a bumper sticker printed up that says, 'I'd rather be roofing.'"

Not so fast, Butch.

Elvis Costello is in the house. Or rather he was, having finished shopping not long before the Flatlanders' arrival. Gilmore is reminded of a 1994 split single he halved with Seattle fuzzbombers Mudhoney.

"Except for being in The Big Lebowski, that was the most attention I ever got," asserts the silver-haired warbler.

Minutes before the trio amigos and Robbie Gjersoe take their stools on a platform downstairs, the store's fire alarm sounds. Defcon 4. Seems Rory has just encountered his first emergency exit. None of the 20 or so spectators assembled in front of the stage budges.

Beginning with Ely's loping oldie, "I Had My Hopes Up High," the band segues into the otherworldly opener from Now Again, Utah Phillips' haunted "Going Away" ("a bridge between the old songs and new," says Ely). Like moths to wool, the music draws onlookers, doubling, then tripling the crowd. "Rose From the Mountain," taken from More a Legend Than a Band, clinches the gig 30 minutes later.

Afterward, the three Flatlanders sign CDs, LPs, T-shirts, hats, and guitars until dark. No small percentage of fans are European, including one man hailing from the Netherlands, home of Ely's sometimes flamenco guitarist, Teye. One woman can't stop staring at Gilmore.

"Should we talk in stereo or mono?" quips Ely, awake, aglow.

The small, soundproofed room deadens the laughter. Padded, barren, mocha-colored interrogation room, with the three Flatlanders lined up in chairs against the back wall. The tribunal is presided over by Steve Reynolds, jolly, judicious, inquisitor.

"Thirty years is a long time between records," opens Reynolds.

"We wrote it over a three-year period," motions Ely.

Jimmie Dale, the tallest, always center stage -- Joe to the left, Butch on the right -- hasn't had his Styrofoam start-up kick in just yet. Butch, eyeing the only other person in the cell, wears a Jack Benny expression that asides, 'We're a long way from Terlingua, Toto ... .'

"We used my home studio as a clubhouse," continues Ely. "Out in the country with no neighbors. That way we could rattle all night."

Passing the baton in stride, n'sync, the musketeers engage each query with camaraderie, wit, existentialism. Panache. Sure, they tried writing together in the past, but hilarity torpedoed productivity. "Pay the Alligator"? A bastardization of the misheard "Play the Radiator." Tough business, that -- writing serious silliness. 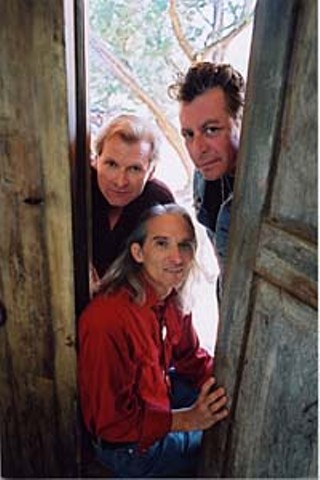 Photo By Will Van Overbeek