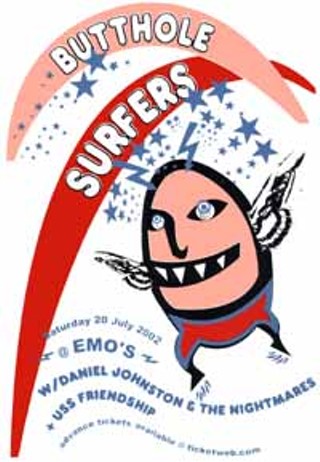 There are those who would call it a miracle. Emo's, that li'l ol' punk rock club on Red River, is celebrating its 10th anniversary this weekend, with posters and ads announcing the stellar lineups of Friday: Riverboat Gamblers, Ignorance Park, Sunday Drunks, Wednesdays, Natchez Shakers (inside), Makers, Detroit Cobras, Wayne Kramer, and Mother Superior, (outside) and Saturday: Danny & the Nightmares, U.S.S. Friendship, and the Butthole Surfers. Even that, however, didn't stop somebody from asking me on Monday morning about a rumor that the club had closed down over the weekend! It's utterly amazing -- no matter what assurances management gives and what improvements they add, such rumors never take a breather. "We're gonna be there forever," warns owner Frank Hendrix. "At the end of time, there'll be Keith Richards, a half-dozen cockroaches, and us." It helps that Hendrix, unlike, say, the folks at the Hole in the Wall, actually owns the building where Emo's is housed. It also helps that he continually expands the place, with hopes to eventually take over the corner where the youth hostel now stands. How did the 41-year-old, Captain Kangaroo-looking Hendrix, always clad in his khaki mechanic's shirt and friendly grin, get to be the unexpected face always seen in front of the club? In the process of another party buying out original owner Eric "Emo-- Hartman, said buyer enlisted Hendrix to loan him some money. "We were gonna be partners," Hendrix explains, "with me the bean counter and him the pretty face." That's when Hendrix walked into the office and found his partner-to-be in the midst of a potentially counterproductive business practice and thus found himself thrust gloriously into full ownership of Emo's. Since then, it's definitely turned into a labor of love, because "anyone who thinks that owning a nightclub is gonna make them money has got another thing coming."

General Manager Dave Thomson, who returned to the Emo's fold this year after a long break, agrees. He remembers how the club, which originally was a no-cover affair, met with near-riots when they started a $1 cover policy to keep themselves afloat. "People screamed and called us greedy," says Thomson. "I said, 'Look, dude, I'm riding a bike to work!'" Today the average cover is $5 for over 21, $8 for minors; this Saturday is an unusual $17/$17. "We pride ourselves on keeping the prices low and consistent," says Hendrix.

Thomson originally came on board when the Austin club opened, moving over from the tiny Houston Emo's which, as he puts it, was "a tiny, stinky place never meant to house live music." Staying on for some three years until called on by South by Southwest to help pick bands for the growing music festival in 1995, Thomson returned to Emo's when he tired of that business and Hendrix offered him more money to come back. Hendrix gushes whenever he mentions any staffers, but retains extra gush for Thomson: "With Dave, you've got someone who understands both the music and the bottom line," explains Hendrix. "In most businesses you've got a guy who can handle one or the other, but not both!" The admiration is mutual; Thomson says he doesn't think Emo's would be here today without Hendrix (the Houston and Dallas clubs are long dead). "I would say that Emo was getting very disillusioned [in his later days at the club]," he postulates. "There were times when he didn't take home any pay." Today, to pay the bills and take care of his two kids, Hartman manages the Texas Land and Cattle steak house. "This isn't the place for a married man," Thomson warns. "It kills relationships."

Building on a mountain that began with Raul's around 1980 and ran the gamut through such later punk hangouts as the Beach, the Cannibal Club, the Cavity, the Cave Club, and the Bates Motel, Emo's has proven itself a survivor, as well as an empire-starter. Other clubs stringing down the length of Red River now seem to be the offspring of Emo's in a way, if not symbiotic with it. "I have a good relationship with those guys," says Thomson, "especially the ones at Room 710 and Beerland. We share information with each other."

The memories pile up for Thomson -- from back in 1992 when the "ladies" in L7 snuck over after a Liberty Lunch gig, and wouldn't leave the stage till 3:30am, to running around with Pink a couple of months ago. The most surreal moment, he says, had to be when Gibby Haynes and Johnny Depp came by and dragged him along to Sugars. "I'm fighting old age," says the 47-year-old Thomson, "but this is keeping me young." He notes that there's a record number of college kids expected at UT this fall -- then quickly clarifies that he's mentioning that in regards to money, not young ladies coming into the club. "I've given up on love, my friend," he sighs.

Oh, and by the way, while it may be a surprise that Bruce Springsteen will be playing the Frank Erwin Center on November 6, I should think the real stunner would be the revelation that Beck will be playing a solo acoustic show at the Westlake High School Fine Arts Center on August 22. Unfortunately for most of you, fewer than 1,000 tickets were available through the Beckster's Web site at www.beck.com/tour/, and they sold out in a heartbeat. Why didn't I say something sooner? Well, I already saw him when he played at Emo's...

"Since we do have a 'new' record of old material that just came out," says King Coffey of the Butthole Surfers, "we're being topical and plan on only playing old material for the [Emo's anniversary] show. There's been a lot of songs from the first LP and first EP that we've been doing in practice, songs we haven't played in 10-plus years." Speaking of a decade's length, Coffey is damn impressed with Emo's longevity. "Ten years is a long time for any club to be around, especially for punk music, and to look at the roster of bands that have played Emo's over that time is pretty impressive. In the Eighties, it always seemed like Austin went through a periodic club drought, there was really nowhere to play if you were a punk band. With the opening of Emo's, however, Austin has been lucky, and the drought days that used to occasionally plague the live punk scene is gone. After 10 years, Emo's has now become an institution, not only locally, but nationally to the touring bands that play there repeatedly -- not to mention it's the most coveted place to play during SXSW."

"Austin and Emo's has been kind of an island of civilization for me in Texas," laughs Wayne Kramer, badass Detroit rocker and former member of the legendary MC5. Another highlight of the Emo's anniversary spectacular, he wonders why the rest of the Lone Star State seems to ignore him. "I'm a guitar player, and the blues has been a large part of my work -- always has been -- so Texas should be a good place for me to play music. Generally, though, my experience in Texas has been that Austin is great and I don't exist anywhere else."

Kramer's playing with openers that include Mother Superior, who he describes as a "barn-burning" band. As far as setting his own fires, Kramer notes, "I'm featuring material from my new album, Adult World. I launched a new record company last year, and I'm reissuing my Epitaph catalog with bonus tracks on enhanced CDs with videos and all that; new liner notes and photos -- more bang for the buck. So I released this new album on Muscle Tone, the new label. It's another collection of stories; of character studies. I just try to tell the truth in these stories and try to be honest in how I portray people, places, and things in the hope that people will connect with them. That's what good art has always done for me. If I listen to James Brown or look at Picasso or read Charles Bukowski, it makes me feel like I'm not alone." No fear, Mr. K -- when you hit the Emo's stage this weekend, you definitely won't be alone.