How I Spent My Last 20 Years

One nice girl's reminiscences about the Hole in the Wall 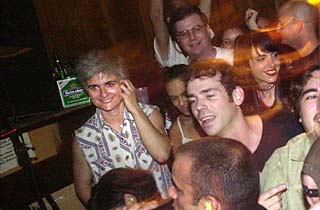 Last night, June 30, 2002, the Hole in the Wall closed. It's so emotional that I can't feel it. The Hole in the Wall was a shitty hole of a bar on the Drag that had been there since 1974. I first started going to it in 1983 when this woman I was doing it with at the time had a Tuesday night residency there. You had to have your own PA in order to play there then, which she did. I was 20, she was 30; it didn't last long, which was a good thing.

But it got me going to that place of incredibly cheap beer, even by Austin's standards at that time. It was, more than anything, a drinking bar. Then in 1987, I want to say, South by Southwest started. I was in Two Nice Girls at the time, and we were asked by the organization to please play for free at this local music conference. We didn't want to play for free, I remember that vividly, but they kept bugging us, and finally we said we would.

We were booked at the Hole in the Wall, which we somehow found further insulting. We played after the Wagoneers, who were just great. An older woman in the audience interrupted their show by threatening the super-tall, lanky drummer that he better stay away from her daughter or she would kill him. In fact, they got into a yelling match in the middle of the Wagoneers' showcase. It was just the sort of out-of-control drama that the Hole inspired.

We didn't know what to expect from that rowdy crowd when we played, but I guess we did okay, because we met our future manager there, and by that summer, he got us a record deal with Rough Trade. So I remember my first gig at the Hole as the one where I got signed.

Later, we went to the Hole to record background sounds for our song "I Spent My Last $10 (on Birth Control and Beer)." We knew if we went in there during Happy Hour, that it would epitomize a hetero honky-tonk. And it did serve very nicely. Two Nice Girls didn't continue to play there, best I can recall, but it was a place I'd play at for various side projects.

Like Rehashville, my band with Robbie Jacks that performed only songs from the movie Nashville. And Make a Joyful Noise, the crazy gospel band that existed one time only for a truly spiritual show that uplifted the kneeling drunkards of the Hole.

After Two Nice Girls broke up, I played the Hole in the Wall more often, since I couldn't pack 'em into Liberty Lunch quite like the old days. The Gretchen Phillips Xperience played our first gig ever at the Hole. It was me on guitar and Andy Loomis in a red polyester dress playing the Casio and a little bass. 'Twas at that show that Rebecca Cannon of Sincola fame first saw Andy Loomis and decided that she was going to get that man.

The first time I saw Sincola with Terri Lord on drums was at the Hole in the Wall, and boy, that was a great show. I saw how good that band could be. And then a few years later my band with Terri, Darcee, and Jo -- Lord Douglas Walston-Phillips -- made its debut at the Hole in the Wall. We continued to play there over the years. We had our Olympics show there where we dressed as various Olympic athletes; Darcee Douglas was very memorable as an Olympic ribbon dancer. We had one of the waitresses singing with us on some cover song ("I Want You to Want Me" perhaps?) at the drunken end of the night. Ooooh, it was fun.

And of course the Hole in the Wall was where I sold my signed k.d. lang T-shirt for $250 at a great benefit and auction that GPX and Girls in the Nose had in order to raise money for our trip to D.C. and NYC for the Stonewall anniversary thingy back in 1994. It was so packed that people were watching the show from outside because they couldn't get in. That was one of the few good things about that tiny stage with the shitty PA: It backed onto the front window, so you could catch a show for free outside if you needed to and could be content merely watching the bands' asses rock.

Oh, I saw some good shows there, too. Crazy Pocket FishRmen shows where they consumed astronomical amounts of alcohol and still played great. Wad, starring Jo Walston playing amazing guitar in an otherwise just okay band. Kathy McCarty's SXSW showcase some years back where she held the entire audience of enraptured devotees in the palm of her hand. Not an easy task at SXSW, where it seems that much of the crowd is just industry jerks there to talk loudly amongst themselves and drink on expense accounts.

The Hole in the Wall was a good club to really take risks at as a performer. There were always lots of regulars, and by that I mean old and sometimes young alcoholic men who went there after work every day and stayed until closing. You didn't make any money off of them at the door, because they'd been at the bar since 5pm.

Sometimes they could get belligerent, but they added such a weird wild-card element to the crowd, at least to this lesbian, that I would feel free to match a certain insanity that was just constantly present inside those walls. Those really stinky with cigarettes and booze and vomit walls. I'm for sure going to miss them.

I've been going to that bar for almost 20 years. It was a really good place to play, even though it was a shitty place to play. Actually, maybe its shittiness made it good. It made the Hole in the Wall be about something else: loud rock music played by hundreds of local musicians who are living in the potentially shitty moment and transcending it completely by the compelling energy, promise, and fulfillment that's present and alive once you forget everything else and just rock as hard as you can with your bandmates and the teeming crowd of drunken, stinky souls.

It is so much fun. It reads really corny, but it's true: Hole in the Wall, I will miss your hallowed halls.