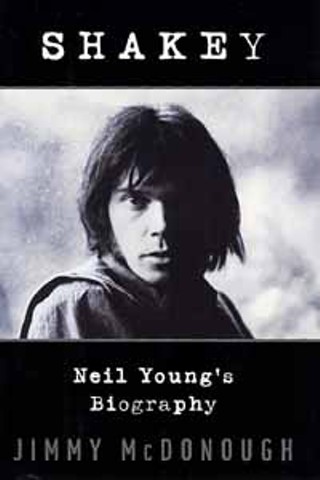 Who's going to read 800 pages on Neil Young? Peter Guralnick's biography of Elvis Presley took two books, and he's "the King." Young is what, "the Godfather of Grunge"? Shakey, which takes its title from a nickname given to Young, who was susceptible to epileptic fits early in his music career, is an interesting, if at times infuriating, read. There are a number of problems with the way Jimmy McDonough tells the story. While he tries to keep things chronological, at times he gets ahead of himself and jumps around, so following him is occasionally frustrating. While the author attempts to research Young's life in great depth, one often gets the feeling he's just scratching the surface. You also sense that's exactly the way Young wanted it. Given that, Shakey reads more like a ramble than a historical document. Touching on his beginnings in Winnipeg, through a time in Toronto, and on to L.A., where he hooks up with Stephen Stills for the formation and disintegration of Buffalo Springfield, Shakey concentrates on Young's most fertile and successful period, his time as a solo artist in the Seventies. McDonough talks to 300 of Young's associates throughout, but the most telling and cutting remarks are from his pals Graham Nash and David Crosby, while Stills refused interviews completely. The Eighties were a turbulent time that brought less success, while the Nineties saw Young's re-emergence. That said, after nearly 800 pages we may know the story, but not the man. One quote from the early Nineties, attributed to record producer David Briggs, brings the whole thing into focus: "I can remember the old days. All these things about Neil being the brooding artist -- it was all bullshit. He was a loose, happy, fun guy. Now, he's like this fuckin' recluse. He doesn't have contact with people anymore. Neil just throws people away like old tissue paper -- I think Neil is a great fuckin' artist, but his vibe -- and the whole trip that surrounds it -- is a sick kinda deal. Just this inbred, uptight program that makes me very uncomfortable to be around."