The Hole in the Wall closes. 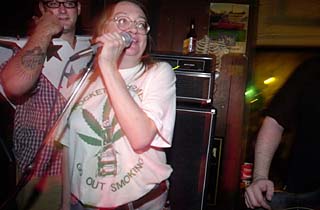 Save the Last Dance for Me: (l) Debbie Rombach goes out smoking ? (Photo By John Anderson)

The Song Is Over

Due to the long July 4 weekend and the Chronicle switching to a new printer in San Antonio, I'm writing this column on a Monday morning. And it's not just any Monday morning, sadly. It's the first morning I've woken up in Austin without a Hole in the Wall to go to if I feel like it. It's not a good feeling, and not unlike that of waking up to find a loved one gone forever.

During the last few days at the club, there have been lots of tears and lots of frustration; at times it seemed that the waitresses were quitting in shifts. At one point on Thursday night, Debbie Rombach was seen huddling behind the mercifully closed backroom bar, unable to go back out and face harsh reality. There was irreverence, too; of the shambles the Hole staff seemed to be in, regular Don Spencer cracked, "If I could buy this place and reopen it, the first thing I'd do is put up a big sign saying, 'Now Open -- Under Management.'"

That scenario isn't far off the mark given one possible future for the Hole. Rumors have been spreading about a local business concern that wants to reopen the Hole much as it has been -- only without the previous management. Developer Perry Lorenz declines to comment on the record about that element of his plan (other than to say he has "no arrangement with the operators of the business"), but says that yes indeed, he's been working to keep the Hole alive. His scenario involves a group of investors who are fans of the establishment, and who are aiding him in his goal of "trying to put together a credible offer" to the property's owners. Unfortunately, says Lorenz, while said potential investors "were everywhere" a month ago, they seem to be dissipating quickly, leaving him taking longer than expected to reach his goal. That's a serious problem, as he only has a 60- to 90-day window of opportunity to reopen the Hole, after which the city would come in and force the new business to make so many renovations that the project would become unfeasible.

? as does Pocket FishRmen's Brant Bingamon (in underwear). (Photo By John Anderson)

Naturally, there's been music, much music, over the past several days at the Hole. The Doug Sahm Hoot, featuring performances by Shandon Sahm, the Nortons (with Joe King Carrasco), and Tortilla Flats on Thursday evening, also served as a goodbye of sorts to The Who's John Entwistle, who had died that morning (Billboard Editor Timothy White and Rosemary Clooney make three). The Austin Music Network was there -- as it had been the previous night for Quatropaw and Britt Daniel's farewells to the club -- with a multi-camera stereo setup that included blazing lights that drove some away but didn't seem to hinder others in their enjoyment of the tunes. You can expect the Hoot and other taped sets to begin airing on AMN in the next couple of months depending on how the editing and whatnot goes. Friday's "Beloved Women of the Hole" brought the splintered Sincola back together, and even enticed the seemingly retired Kathy McCarty out for an acoustic rendition of Daniel Johnston's "Livin' Life." Saturday saw chaos from the Swishbucklers, the Jitters, and others. Sunday, the final night, found the club fronted by an uncommon line threading down the block, preceded by a blitz of TV news teams. Though on-camera all was faux-sincere eulogies and crocodile tears, when the little light was off, at least one on-air reporter was heard wondering aloud why part of her afternoon had to be spent in such a "nasty, smelly" little dive.

At the end of the night, the Pocket FishRmen closed down the venue, heatstroke threatening those who headed to the rear to rest their ears from the front stage din. The FishRmen stirred the packed Hole into a total frenzy as they blasted into the "official" last song at the Hole, the aptly-titled "Go Out Smokin'." For once, their advice could be followed, so a joint was passed around the front of the stage without anyone getting tossed out of the club. A request for "Amy Carter" followed, and then it was all over. It was a night to remember, even for those who were drinking to forget.

Now, however, is now. The Hole is closed, snapped shut like a vortex to another, somehow magical place that, barring some miracle on Perry Lorenz's part, we can never again return to. The regular customers, creatures of habit strongly akin to their fictional counterparts on TV shows like Cheers, have scattered like ants whose pile has been kicked over; they frantically signal among themselves the new prime imperative: to find a new meeting place. Bands and barflies alike stumble numbly about New Austin, as close to homeless as they intend ever to be. "This is the end of the Drag," sighs Doe Montoya resignedly. Her first "real" stage appearance, she says, was just up the street at the now-long-dead Austin Outhouse, and now that the Hole is gone too, she wonders where she'll play -- and where she'll hang out in general. "Can't forget Beerland," she offers. Pocket FishRmen guitarist and Rockland Eagles member Cris Burns sniffs that "the smart money is on Room 710" as the recipient of much of the Hole's talent pool, as well as its nighttime customers. "If anybody had a clue they'd go to the Parlor," grunts another nameless regular, not making it totally clear whether he's referring to the taco 'n' tango joint the Empanada Parlour down on the east end of Sixth Street or the rockin' pizza Parlor in the quaint anti-mall strip up on North Loop. And let us not forget the Texas Chili Parlor! Either one has its own reasons to be an appropriate choice, after all. In the meantime, some quick-thinking performers (and their fans) have already settled upon Ego's as a refuge -- enough of them, in fact, that some are already referring to the venue as the "new Hole across the river."

Between collecting cover charges at Ego's, doorman Michael Crabtree agrees that the two nightspots "have a similar vibe," even as others point out their similar age, size, and funky, off-the-beaten-pathness. Crabtree confirms that Ego's is expecting a major influx of acts left stageless by the Hole's demise. The Nortons have already arranged to move their weekly Thursday groove across the river to Ego's, and others like Jane Bond are in the process of making the switch. Crabtree says that the club's July calendar isn't much of an indication of their post-Hole schedule, however, since a trip by the venue's manager has resulted in it being filled up early. "Just wait until August," he says, guaranteeing that a Hole lot more new acts from the Drag area will be making appearances on Ego's handbills.

The Texas Showdown, which one segment of Hole regulars considered something of a sister bar to their favorite night spot -- or at least another dive within walking distance that had better pinball machines -- would appear destined to face some changes in the Hole's absence. Or will it? The Showdown definitely doesn't plan on taking over the Hole's mixed-drink market, says owner Eddie Mac Edwards. He somewhat cryptically mentions that he "never really was a fan" of the Hole, but admits freely that the neighborhood won't be the same without it. He's not sure what to expect in terms of his own business being affected by a Hole-less Drag. Either the former Hole customers will add to his business, he guesses, or maybe those who don't come around anymore will hurt it. In any case, he's clear that the Showdown (which many years ago was itself home to the punk club Raul's) won't be filling the missing cocktail spot on the Drag vacated by the Hole. The Showdown will definitely remain beer and wine only, because he doesn't need the added taxes and/or liability, and because "we've been beer-only for a long, long time." Besides, adds Edwards, such exclusively hops-happy hangouts "are getting kinda rare." Of all the Showdowns (other locations include San Marcos), I'm told that the Austin one is the only one still serving only beer and wine -- and it's also the most successful. So that formula, and the staunch Showdown itself, will stay the same as it ever was.

However, the Hole, yet another irreplaceable Austin institution that gave this town its identity, another living landmark that combined funkiness with just plain fun, is gone, in all likelihood forever. Another candle of Austin uniqueness snuffed out. One surviving local bastion of individuality and oddness suggests that we continue "Onward Through the Fog," but I don't know how much longer we can continue in this fashion. It's getting awfully dark out there...