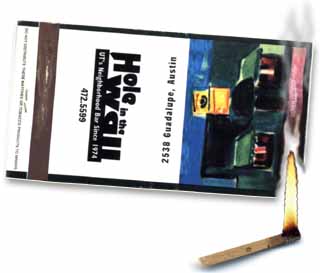 Matchless: The Hole in the Wall gets extinguished.

She's Got the Hole World in Her Hands

... but not for long. With the very last of her frazzled nerves coming apart at the seams, the Hole in the Wall's Debbie Rombach admits that "come July 1st, I'll be out of a job." She's still not completely writing off the possibility of a miracle, but that is the word -- "miracle" -- she uses as her only hope for the Hole to survive any longer. Despite residing on the Drag long enough to become beloved in the hearts of several generations of Austinites (not to mention breaking in scores of future journalists at The Daily Texan), no magical lump sum of money is on its way toward buying the building that houses the Hole. Neither has any reassurance come from the owners indicating that the venue won't be snatched away at the end of the month, and despite positive indicators in the early part of June, Rombach says that attendance in the latter half of the month has not been encouraging. An Austin American-Statesman article published over the weekend seemed to offer hope, if only because it didn't declare that the club was kaput. However, insiders at the daily say that the piece was planned with the assumption that evidence about the club continuing or shutting down would have come out by last Saturday, and when it didn't, the decision was made to run a history piece on the Hole while it still existed. A nice thought, but no miracle -- if you haven't paid your last respects to the Hole yet, I must sadly suggest that you almost assuredly have less than two weeks to do so.

The summer buzz at Antone's is usually about the upcoming anniversary lineup, and this year's celebration emphasizes local names. Among Austin-centric acts confirmed are Junior Brown, Marcia Ball, Ian Moore, Vallejo, Guy Forsyth, Doyle Bramhall II, Bob Schneider, and Gravyboat, though Jason & the Scorchers and Joe Bonamassa are also on the calendar. No, it's not the blues all-stars of past years, but we don't mind speculating that it's possible club owner Clifford Antone might be out of prison to ring in the New Year and the club is saving up some bigger acts for that time, to welcome him home in style. With all those cool Chicago legends in attendance, natch. Meanwhile, Double Trouble, who bubbled last year with their stellar Been a Long Time CD, are officially a performing act again. Drummer Chris Layton reports that Reese Wynans has rejoined him and bassist Tommy Shannon, and the trio has added guitarist Mike Keller and ex-Screamin' Cheetah Wheelies' Mike Farris on vocals. The revamped band debuts at Antone's Friday 21 with a "back to the blues" approach that includes two Stevie Ray Vaughan tunes ("Change It," "Life Without You") for the first time since the death of their bandleader in 1990. And what happened to the girl vocalist slot that included Lisa Tingle and Susan Tedeschi? Sounds like a case of potential female trouble? Nah, Double Trouble never intended to "make a band from the [musicians on that] record," Layton avers. And while we're invoking the V-name, Jimmie Vaughan recently returned from Japan via Hawaii but goes to Europe for a series of dates beginning with Lucerne, Switzerland's Blue Balls Fest July 25. Other tour dates on the continent include France, Belgium, and London.

Mark Rubin will be gone for the rest of the summer with a touring itinerary that takes him from Krakow, Poland, to the Festival of American Fiddle Tunes in Port Townsend, Washington, and then back over the pond to festival appearances in Croatia, Germany, and England. His Texas swing ensemble the Ridgetop Syncopators will be playing its last show for a while tonight (Thursday) at the Black Cat Lounge from 10-11pm. Sez the former Bad Liver, "We'll be back at our regular Thursday night stand the first week of August." Also of note: Rubin has just released a CD of "blues, hokum, and even some Western swing tunes" with an all-star old-timey music (think R. Crumb's Cheap Suit Serenaders with tattoos) group called the Bing Bang Boys. His co-bangers include the Hermanos Canote (Greg on fiddle and Jere on guitar, or both on banjo ukes), from the long-running Seattle-based NPR show Sandy Bradley's Potluck, and W.B. Reid, another long-time banjo/fiddle/guitar player of old-timey tunes and current Seattle resident. And here we all thought that Danny Barnes had inherited all the Northeastern connections when the Bad Livers broke up!

The second leg of Lucinda Williams' summer tour begins Thursday, June 20, in Las Vegas, but it's her upper arm that will be in the spotlight. The high priestess of Southern Gothic is getting her first tattoo, an Aztec snake, from Hawaiian inksmith Kandi Everett. Sporting a stripped-down band, the tour takes Williams only as close to Austin as Fort Worth's Bass Performance Hall July 5... Lourdes Perez is among 18 delegates journeying to the Middle East to spend nine days in the Israeli occupied West Bank territories. The trip is sponsored by California-based Global Exchange group, who arrange for the travelers to meet with human rights organizations and workers for the purpose of learning more about the conflict (between the Israelis and Palestinians, not Lucinda's body parts)... Local space-popsters Experimental Aircraft made their MTV debut this past Monday ... sort of. "The Pod," from their self-titled debut on Devil in the Woods, was featured in the season premiere of Road Rules 11. It's unclear how long the song was actually playing on the air, but fans of the group will be getting a whole new album's worth of material when they finally release their second Devil in the Woods album, Love for the Last Time, in September... Well, the Rolling Stones Hoot CD that Propeller Records' Paul Horsley announced some time ago as a benefit for SIMS "completely fell apart," he says, and it has been canceled due to "legal issues involving mechanical licensing, and I'm pretty sure that Allen Klein has something to do with it." However, bootlegs of the CD are floating around town, with some seriously cool tracks, such as the Real Heroes' mock-solid take on "Emotional Rescue." In the meantime, Horsley/Propeller has been working on several different projects, including a disc by the keg vultures, a new band including folks from Guardez Lou, plus Organdy Snood, consisting of Horsley and L.A. collaborator Dave Eccles, who works on scoring Rugrats, have their first 45 set to hit the streets sometime in August with special color vinyl packages. Back to the Rolling ones, a certain local music store owner says he has no idea whence come rumors linking him and a secret club date by the Stones. For that matter, when's a certain famous Texas trio gonna play a mystery date in this town, anyhow? Maybe at another one of the many club anniversaries coming up? See Music Listings p.84 for info on the Beerland (first) and Room 710 (second) anniversary festivities... After all, Epistrophy Arts is presenting the final installment of the 2nd Austin International Creative Music Series on June 29 with New York's Trio X (Joe McPhee -- reeds, trumpet; Dominic Duval -- bass, electronics; and Jay Rosen -- drums) at Ceremony Hall... Meanwhile, the Best Buy News Network reveals that singer, keyboardist, and middle child Taylor Hanson married his longtime sweetheart Natalie Anne Bryant in a small, private ceremony in Georgia on June 8. A young lad by the name of Davíd Garza provided the musical entertainment for the wedding reception. (So that's what the former Twang Twang Shock-a-Boomer is up to between albums!) As for SXSW "discoveries" Hanson, the band: Taylor, Isaac, and Zac's follow-up to 2000's This Time Around is expected out early next year... Wear plaid and they will come: After the Brobdinganagian Bards' recently showed up for their Cafe Mundi gig in kilts, their audiences began donning their Ren-Fest best, too. The bi-weekly Wednesday shows (next one: June 26) have turned into mini-fairs sans the peace-bonded swords but with plenty of wenches, thank you... Correction: Dan Israel writes: "I'm sure I'm the 10,000th person to e-mail you this, but isn't David Baerwald's low-profile but awesome guitarist Darwin Smith, not Austin singer-songwriter Darden Smith? The Darwin Smith formerly in Seela's band, not the Darden Smith of 'Little Victories' and 'Lovin' Arms' fame? (See "Postmarks" for Darden's take on the matter.) I'm sure you're already running a correction on this, but I just thought I'd ask ... sorry to be that 10,000th e-mailer ... do I win a prize?" (Ken Lieck replies: Sorry, Dan, the 5,000th e-mailer cultivated the last prize we had. There is, however, some leftover squid from Nick Barbaro's World Cup breakfasts you are welcome to.)