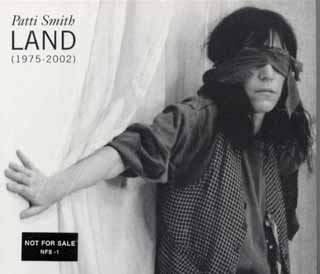 Land (1975-2002) (Arista) Patti Smith and the horses she rode in on had a formidable, singular effect on music as Land (1975-2002) demonstrates. The first compilation of her career, this 2-CD set gathers her singles and album tracks (as voted by her fans) on one disc, and obscure material, demos, and alternate takes on another. The overall effect is glorious (no pun intended), a rich, albeit slightly flawed sampling of the punk princess' lengthy reign. There's no quibbling about what's included -- both discs are sterling -- though it's easy for Smith diehards to find gaps. (Fans really chose "Free Money" over "Horses"?) The disconcerting aspect is the shuffled order of disc one's songs. A compilation serves as a historical reflection, and demands the formality of chronology. One of the aural pleasures in reviewing an artist's career is their development and growth; the explosion of primal emotion that is "Gloria" is diluted by the later recording of "Rock & Roll Nigger" preceding it, both songs sequenced after openers "Dancing Barefoot" and "Babelogue." If the continuity suffers from ill-advised placement, the songs stand as bright and shining monuments to Smith's powerful, poetic vision. Land's true beauty begins with her delicate take on Prince's "When Doves Cry" and flows throughout disc two with 13 offbeat additions that extend Smith's vision into darker and sometimes more mystical realms. The second disc is more chronologically cohesive, opening with 1974's "Piss Factory" and demos of "Redondo Beach" and "Distant Fingers," and featuring live tracks like "Wander I Go" (with Jeff Buckley on guitar) and "Birdland," before closing with 2002's "Notes to the Future." Far from offering any insight or exposition about Smith's music, the brief text of Susan Sontag's heavily touted liner notes reads like a note passed in a private school classroom for intellectually superior girls. Flip past that and enjoy the scrapbook of photos and posters, little frames of life stylized by the poet's presence. Just like a Patti Smith song.