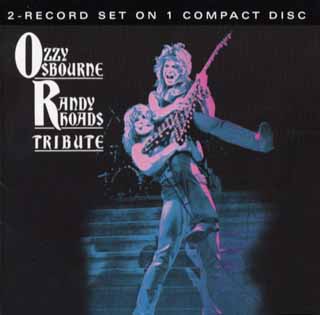 Diary of a Madman (Epic)

Tribute (Epic) Before there was Ozzy Osbourne, there was a pudgy, dyslexic loser named John, who hailed from Hell. Or Birmingham, England, an industrial backwater passed over by the Summer of Love. In late-Sixties Birmingham, there was only soot, and plenty to go around. Think Cleveland if it was Pittsburgh. When young Johnny B. Bad and his three buddies formed a band in 1969, it sounded just like good ol' Birmingham: sludge. Vietnam, Watergate, the death of the Sixties dream -- Black Sabbath was also the sound of the Seventies, and John the voice: a flat, monotone cry. By 1978, when Osbourne got the sack, Sabbath's metallic doom was as passé as the decade. As laughable as it sounds now, being the former vocalist of a hugely successful band -- not yet acknowledged as the seminal act time has proven Sabbath to be -- didn't guarantee success; 1980's Blizzard of Ozz, was, in fact, recorded without label backing, cut rather, for the express purpose of garnering just that. Holed up in a London flat with a 23-year-old golden boy guitarist from Burbank -- Randy Rhoads (cue halos) -- Osbourne wrote the bulk of Blizzard and its 1981 follow-up, Diary of a Madman. Twenty long years later, their multi-platinum breakthrough can be ascribed the somewhat dubious honor of being more or less the first domino leading to this season's biggest cable hit, The Osbournes. While the head of said modern-day Munsters has aged remarkably well, his solo debut, remastered, reissued, hasn't; Blizzard sounds about as vital today as a dry cleaners in Vermont. "Crazy Train" is an undeniably memorable riff-rocket, and "Suicide Solution" a shoulda-been Sabbath classic, but the LP's thin sound is cartoonish in the wake of Osbourne's previous band. Diary comes off better, rawer and heavier, but save for openers/FM hits "Over the Mountain" and "Flying High Again," the songs aren't as memorable. Tribute, released in 1987 -- six years after Rhodes' death by plane -- gathers the best of both albums, and live, the stiffness of the studio disappears, drum solo et al. Out of all of Ozzy Osbourne's post-Sabbath releases, Tribute may be the one true antidote to The Osbourne Family Album, a new collection of the first family's faves, which begins with Pat Boone doing "Crazy Train." Now that's scary.