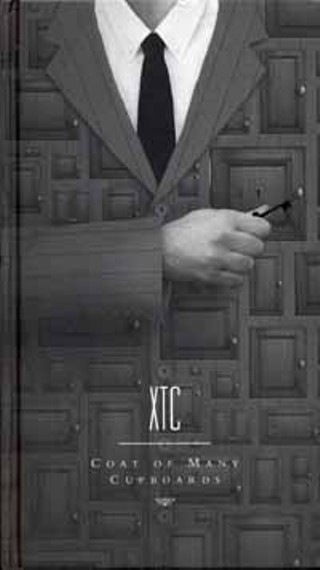 Coat of Many Cupboards (Virgin) True to its title, the front of the new XTC box set suggests a puzzle. A man with a coat is made up of numerous locked cupboards proffers a shining, golden key, which opens ... one? All? The holder gets the impression that opening the package will reveal a clever puzzle involving getting to the CDs inside, but no, they're simply waiting behind cardboard "cupboard" doors, surrounding a generously long booklet that offers info (solved puzzles?) about the band and the music enclosed within. The true puzzle here is exactly who this 4-CD box is aimed at. Last year's Transmission Blast was an easy solve, being four discs of material from the BBC vaults. Simple -- either you have/want it, or you don't. Coat is, however, taken from many cupboards as promised, and a few of them might as well have been left locked. On the plus side are a couple of early songs by band member Barry Andrews ("Things Fall to Bits," "Us Being Us"), which demonstrate how punk the band could be, plus innumerable live cuts, demos, and outtakes that highlights XTC's majesty in all its forms. A not-so-subtly different unreleased U.S. single mix of "Life Begins at the Hop" is a delightful alternative to the original, while a silly "Generals and Majors" work tape is good for laughs, and a clunky, early "Ballad of Peter Pumpkinhead" belies its final form as a melodious masterpiece worthy of addition to the JFK legend. The list goes on and on and on. So where's the downside, you ask? Well, there are also around a dozen album cuts on here as well, and any self-respecting XTC nut already has each and every one of the band's albums. For that matter, with an instinct for completism second only to Beatlemaniacs (appropriate, since XTC is the only band worthy of the title "the next Beatles"), how many fans already own the complete alternate "work tape" versions of their last two albums, the Apple Venus discs? Finally, how many would still purchase Coat of Many Cupboards even if this or any review warned them away from it with all the passion words can express? All of them, you say? Puzzle solved.