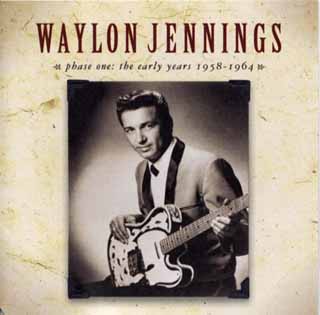 Phase One: The Early Years 1958-1964 (Hip-O) When Chet Atkins first signed Waylon Jennings to RCA Records, he was unsure what niche to put the singer in, labeling him "folk-country" and hoping to cash in on the folkie boom of the day. Some of Phase One could be called "folk-country," but coming after Jennings' nearly ill-fated stint in Buddy Holly's Crickets, the material on this single disc collection is nothing if not eclectic. Jennings takes on everything from Cajun chestnut "Jolie Blon" (backed by Holly) and Dylan's "Don't Think Twice, It's Alright" to Roy Orbison's "It's So Easy." Some of the more interesting moments are Herb Alpert's mariachi horns on "Rave On," the eerie, bare-bones version of "House of the Rising Sun," and an early version of Jennings' own "Just to Satisfy You." There's even "The Stage (Stars in Heaven)," a creepy recitation along the lines of "Hillbilly Heaven," eulogizing Holly, Eddie Cochran, the Big Bopper, and Richie Valens. The Holly influence can be heard through much of the songs, with plenty of jumpy Fender guitar, and Tommy Allsup and King Curtis providing backup on a couple of songs. Ricocheting from mannered rockabilly and honky-tonk (Buck Owens' "Love's Gonna Live Here Again") to R&B and Cajun, Jennings was obviously an artist in search of his own voice and grasping for a style to call his own. Much of what's on here is raw and unpolished; some songs are byproducts of the rancorous relationship between Holly and producer Norman Petty. Still, it's obvious that Jennings was a singer whose best years lay before him. After being discovered by Bobby Bare and Don Bowman, Jennings caught Atkins' attention, and in an unusually generous move, Herb Alpert released the singer from his contract at A&M so he could sign with RCA. The rest is country music history.