Dee Dee's dead, everything else is crumbling. 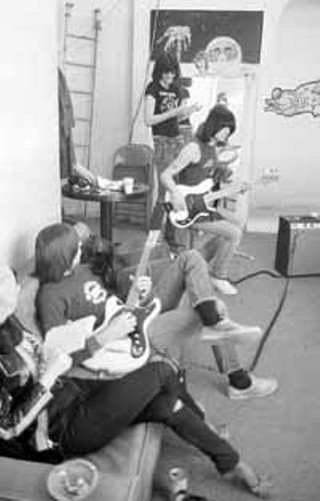 Too Tough to Die: the Ramones backstage at the Armadillo, 1977. (Photo By Ken Hoge) Too Tough to Die: the Ramones backstage at the Armadillo, 1977. (Photo By Ken Hoge)

Well, I thought this column had already had its share of obits in recent weeks, but the Music department has decided that we should have a moment of noise for the second of the Ramones to pass from this plane, Dee Dee Ramone, aka Douglas Glenn Colvin (no relation to Shawn?). If you haven't yet, crank up the stereo with your fave Ramones tune (if Cindy Toth hadn't sold my 8-track of Rock & Roll High School, that would be my first choice), and keep it going until your next door neighbor gives Lt. Piatt a call... A Gala Benefit Dance and Memorial Tribute for Randy Garibay will be held this Friday, 7pm-midnight, at the Alzafar Shrine Center in San Antonio, 901 N. Loop 1604 West; donation is $15 per person. The event kicks off with a special awards ceremony honoring the bluesman's life and music, followed by a caravan of bands including Michelle Garibay-Carey, Randy's band Cats Don't Sleep featuring Ernie Garibay, plus George Rivas, Rudy T, the Sequence, Roy Trevino, and other surprise performers. Proceeds go to the Alzafar Shrine Children's Fund and the Garibay family to help pay expenses of his illness and death... Next Thursday, June 20, here in Austin there will be a tribute at the Continental Club for One World Music owner Steve Brown, who passed away May 13. Acts include Eric Johnson & David Grissom, the LeRoi Brothers, Gurf Morlix, Bill Elm, the TimberWolves, Blue Midnight, Lance Keltner, Grady Pinkerton, and hosts Papa Mali & the Instigators. Proceeds go to Brown's family... In the "you call that living?" dept., Britt Jones is taking a break between operations, and Friday finds Sickpony (hey, the typo was in their e-mail and it's a more appropriate name for Jones' band than "Stickpony" anyhow!) back at the Hole opening for the magnificent Meat Purveyors. The show features the return to the Hole stage of former Wannabes drummer Thad Swiderski, whose new band opens up the show at 9:30pm with the D.W. Idols following, then on to the 'Pony, and the Purveyors... David Beebe of El Orbits returned to the stage last week at the Continental Club with Banana Blender Surprise after several months of infirmity. Beebe was admitted to the hospital December 7 with dangerously high blood pressure, and stayed there for about a week with a case of heart failure. He's now on "heart hypertension medicine befitting a 65-year-old black man for the rest of my life, and also have been ordered to keep off the salt," but Beebe concedes he's still allowed to sip his beloved RC cola.

Welcome To the Doomtown

David Baerwald, formerly of David & David, has undoubtedly witnessed the recent crumbling of the Austin music scene, but don't expect him to be bummed about his decision to move here last January (into our publisher Nick Barbaro's old house). Ask him what he thinks of the city and he merely mutters a minor epithet about the heat. The Texas summer shouldn't be too much worry for Baerwald, however, as he's spending the majority of his time on the road in support of Abra Moore with his all-Austin band, Will Sexton, Bukka Allen, Darden Smith, and JJ Johnson. He's been buds with Sexton for a long time, and in fact credits young Will with his decision to move here; Smith is the only one of the bunch he wasn't familiar with beforehand. From mid-tour in Virginia, he reports that he's already come to love Smith as much as the others -- and that Darden needs the support, as he's just gone and broken his foot! Limping or no, Baerwald says they'll all be back in town for an early July gig, and then it's off to New York for a reading of his new, yet-unpublished book, An Outrageous Pack of Lies, with the aid of pals Sean Penn and Phil Rudd, who'll be at the reading. Baerwald says he hopes the tome won't remain unpublished much longer, but in the meantime, his upcoming release for hot O Brother Where Art Thou? label Lost Highway on July 16 should keep him riding the roads from city to city, looking for his next boom town.

You Gotta Learn To Project...

Seems like every venue in town with a wall has suddenly gotten their hands on a video projector and materials to screen before, after, or between acts. Last week Club DeVille showed an episode of Junkward Wars, while Beerland screened the kick-ass Rock Opera. Coming up at Room 710 is digital movie night, with the goal being to show loops of digital film shorts, spotlighting local individuals' creative contributions. The 710 is looking for "Music videos, documentaries, animation, whatever. As long as we can compile and project them." This Tuesday looks to be their first run, but that date is currently up in the air. Would-be contributors call Asher at the bar regarding submissions, M-F, 12-5pm. Meanwhile, check out Emo's, where they've started opening early to show free movies every night from 7-10pm. Sundays are special, with the current Futurama/King of the Hill/Simpsons block screening 6-7:30pm, and the rest of the evening devoted to ... well, this Sunday it's Spinal Tap, thanks to yours truly. I've edited a slew of rare outtakes back in to create a "complete," three-hour version of This is Spinal Tap to run from 7:30-10:30pm, and rare Tap clips from 1977 to 2001 to fill out the night with the Loudest Band in Rock. The rest of the month continues the trend with more rock/punk movies from 7-10pm most nights of the week as seen in the schedule below:

Bomb threats? Altamont-style stabbings? Those were a couple of the suggestions going around to explain the massive number of cops and erstwhile authority figures in the vicinity of Stubb's during Sunday's Social Distortion show. So what really went on? "Nothing more than a great rock show," says Stubb's boss man Charles Attal, who notes that the high number of officers in attendance was "just extra security -- you never can be too safe." Sorry, Charlie, maybe 15 years ago the cop-a-rama might have been appropriate, but the audience for Mike Ness and company is now too old to knock the hat off a mall rent-a-cop... This Saturday the Eastside's premier venue, the Victory Grill, commemorates Juneteenth and the fact that June is Black Music Month with performances by the Texas Eastside Kings and the Blues Specialists featuring Mel Davis. As they say at the Victory, "Juneteenth, like our barbecue and our music, is uniquely black and Texan"... July 1 should be a busy day for Austin City Limits -- not just because Alejandro Escovedo is taping that day, but rather because that's the day they'll actually announce some of the bands playing their big festival at Zilker Park September 28-29. You'll find the info then at www.aclfestival.com and elsewhere... Joe "King-- Carrasco, Tex-Mex party music emperor, will rule the festivities once more at a party this Saturday at RiverSounds in Castell, Texas. Carrasco has recorded his last two CDs at said multi-track digital recording facility on the banks of the Llano River, which is celebrating its fourth b-day with the bash. Festivities go 1-10pm at the studio, with gates opening at noon and tickets costing $10... Note to the ladies: Mars needs women! The music store Mars, that is, which is hosting a "Women in Music" night next Tuesday, with free gear demonstrations, clinics, and performances by female artists... The latest on the Zulu As Kono member mystery comes with the announcement that half the band members, Brandon Crowe, J.D. Fanning, and Josh Chalmers are now playing as Oh, Beast!, with their first show on Monday at Emo's, opening for the enigmatic, eclectic, but never ersatz Sleepytime Gorilla Museum... The First Annual Serranos American Music Festival presented by the Austin Symphony and KGSR is at Serranos Symphony Square this Friday and Saturday. The festival features a stellar lineup including Guy Clark, Billy Joe Shaver, Reckless Kelly, Damnations, Jimmy LaFave, Austin Lounge Lizards, Eliza Gilkyson, and Kimmie Rhodes... Speaking of the long-lived Lizards, they will take a break from national touring for several weeks in July and August while co-founder/singer-songwriter/rhythm guitarist Hank Card recuperates from upcoming prostate surgery. Catch 'em while you can... Tune in or turn out? That's your choice with the "Live at Threadgill's" show presented by radio station KVET-FM. Remember this column's prediction that a recent show was expected to lead to regular live music at TWH? Well, this series is being presented outdoors from 8-10pm each Wednesday at Threadgill's World Headquarters, 301 W. Riverside Dr., and whether you're in the car or at the bar, the music's the same... On a similar note, I hear that last Sunday afternoon's reunion of Tex Thomas & the Danglin' Wranglers at Güero's on Congress has already convinced the owners of the eatery to start booking them ol' boys as a monthly thing on the first Sunday of each month. That's as long as they turn it down a bit ... or was it up?