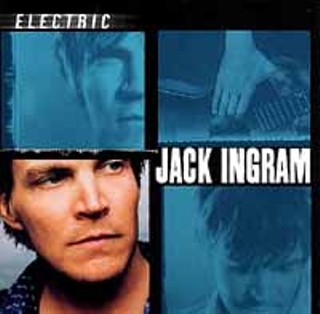 Electric (Lucky Dog) As one of the leading lights of the Texas music revolution, Jack Ingram has generated both a buzz and a fan base with his style of rockin' country. Electric finds him stepping away a bit from the derivative sounds of his past, into a present that's meatier, much more personal, and definitely more interesting. A self-described song cycle that deals with the way we live our lives, Electric explores both the joys and sorrows that come with relationships, living with self-deception, and the possibilities of spiritual faith. Throughout, Ingram focuses on the contradictions we find in life and does so in a way that's refreshing and startlingly honest. The truly remarkable aspect of all this is that he accomplishes it all within an electric framework, which accounts for the album's title. Songs like the honky-tonking "Everybody," the high-stepping "We're All in This Together," and an appropriately raucous cover of Scott Miller's "I Won't Go With Her" are nitro-fueled electric guitar romps. Guest stars abound with Patty Griffin, Lee Ann Womack, Bruce Robison, and Buddy Miller adding vocals, while a couple of Austin's best guitar slingers, Jon Dee Graham and David Grissom, make sure the whole thing really does stay Electric. "Goodnight Moon," written by Will Kimbrough and Gwil Owen, ends the disc with a neon glow. A late-night lullaby of sorts, it's a nearly perfect way for Ingram to close out the rowdiness that precedes it, and it's the mark of an artist that has matured into someone special. (Jack Ingram's local CD release is Saturday, June 8, at Stubb's.)