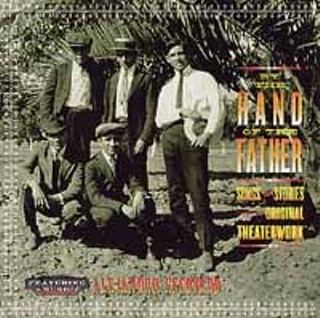 By the Hand of the Father (TMG) Who doesn't love family stories? Those intoxicating tales that make children prowl at their elders' feet to hear how their parents met; stories of dads who drank too hard and the mothers who loved them even harder. Babies born and babies lost. First loves, faded loves, eternal loves. Family stories are the foundation of Alejandro Escovedo's marvelous new By the Hand of the Father, songs and stories from his original theatre production of the same title. Unlike most soundtracks, By the Hand of the Father stands on its own as a thematically driven collection, with select dialogue from the production that enhances rather than clutters the music. Gentle waltzes ("59 Years Waltz"), bouncy rancheras ("Mexico Americano"), and weepy ballads ("Rosalie") deliver satisfyingly. However, it's songs like the moody "Silence," a masterful hybrid of urban ballad and country twang that elevates the album from merely fine to memorable. Additional vocals and instrumentals by Ruben Ramos, Rosie Flores, Cesar Rosas, and Pete Escovedo give finishing touches to already well-hewn tunes. By the Hand of the Father was created in collaboration with Theresa Chavez, Eric Gutierrez, and Rose Portillo as a tribute to first generation Mexican-American fathers. Presented in Austin as a work-in-progress in 1999, it had a successful Los Angeles run in 2000, and well-received performances throughout the U.S. and Canada. The show runs in Austin, June 27-29, at the Texas Union Theater.