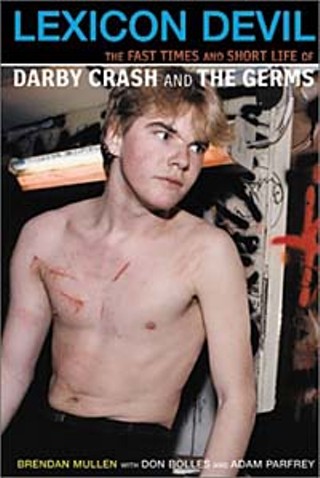 Lexicon Devil: The Fast Times and Short Life of Darby Crash and the Germs

By Brendan Mullen, with Don Bolles and Adam Parfrey

The career of Darby Crash lasted only a couple of years. He made one album that didn't sell very well, and then committed suicide by heroin overdose in 1980 when he was 22. You might wonder how that life could support a biography, but this book is about as compellingly readable a portrait of a personality and a culture as anything you're likely to set eyes on.

During his life, Crash (Paul Beahm) was a little bitty legend, and since his death that legend has grown, for a couple of reasons. First, rock stars, even minor ones, grow in death. Second, Crash's band the Germs turned out to be more influential than anyone could've dreamed at the time. Many music historians consider the Germs to be the first performers of hardcore punk, the genre that has given us Black Flag, the Dicks, Minor Threat, and influenced much American rock music of the past 15 years: Fugazi, Nirvana, and the Foo Fighters, who originally included Germs guitarist Pat Smear. In fact, hardcore thrashes on now as hard as ever, even on the pop charts, where you can hear imitations by P.O.D. or Linkin Park.

For his part in all of this, Darby was one of the most relentless drug addicts in modern music, and there's a description in Lexicon Devil from his last year in which, though Crash is too high to open his mouth, "Germettes" are still feeding him pills. On the other hand, Crash is described by many people as extremely intelligent and occasionally even caring. He charmed as well as constrained people into following him around and doing what he told them to do.

Furthermore, the monster Darby Crash was nursed in an extraordinarily pathological environment -- the L.A. punk scene, which produced music as diverse as that made by X, the Go-Gos, the Blasters, and Joan Jett. The SoCal kids were out having fun as an act of rebellion, squatting in old Hollywood apartment buildings and gigging at the legendary Masque. Most of the participants describe the scene as carefree fun, but the pain, desperation, and degradation couldn't be more palpable. Male prostitution is central, and at one point, Crash's roommate is pictured servicing Hollywood Square Paul Lynde the night before the latter's death, which is attributed to amyl nitrate.

Indeed, one of the innumerable problems that led to Crash's suicide was that he was deeply closeted, a fact that had long been suspected and is shown definitively here for the first time. The concealment of his homosexuality is particularly sad given the rhetoric of sexual liberation that went with L.A. punk. But in his own way, he was a mini-sex-symbol, and coming out would have compromised his ability to mooch rides from girls.