Denton's Lift to Experience head for the promised land, with gun in hand 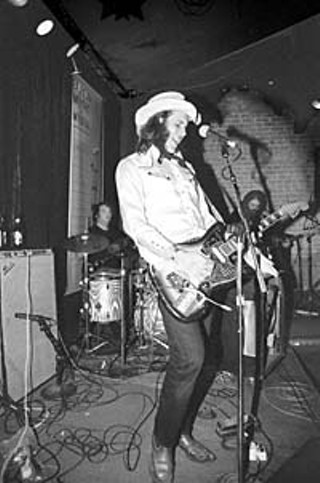 You have entered the world of Denton's Lift to Experience, and they haven't even played a single note. When that note finally does come, it's the mother of all notes. It's a whirling, enveloping tsunami, oozing from the vintage Leslie amp, and it gets louder and louder as it systematically seeps into every corner of the room, doubling upon itself in a powerful sonic gestalt.

Buck, whose real name is Josh T. Pearson, is the guitarist channeling this sound, though by the tortured look on his face, it might be channeling him. Just when he can't take it anymore, the dam bursts and his soulful, angelic hymns come pouring out, begging for forgiveness from the Almighty, and yearning for the River Jordan, the stars of Palestine, and of course, the big, bright sky deep in the heart of Texas. There's also plenty about guns and the apocalypse.

Overcome with emotion, he drops to his knees, facing the huge Texas flag, as the whirring amp radiates intense spiritual overtones. Everyone in the room is now waist-deep in a mythology so bizarre that, yes, it could have only come from Texas Our Texas, home of Tex, David Koresh, and the 13th Floor Elevators.

As with all good folklore, there's a compelling creation myth behind Europe's favorite Denton space-rock band with a Texas-sized Jesus fetish. Fittingly, this story has three parts.

The first part occurred in the late Seventies, when Pearson was 4. His father had been, up to that point, an evangelist preacher of the Pentecostal faith, the most fire-and-brimstone of all the major denominations. Then he was suddenly swept away by the Faith Movement, a radical sect based on the teachings of theologian Kenneth Hagin.

"The idea was that you can get anything from God if you believe that you want it," says Pearson. So his father left the Pentecostal church and refused to support his family, under the notion that a job was useless, that he could use his faith to get whatever he wanted.

Buck's mother took the kids and left, Pearson continuing to soak up the Pentecostal faith while singing in the church choir. The divorce left him with unresolved issues he didn't confront until well over a decade later.

"I had this father who really felt he was serving God in the best way possible, yet wouldn't provide for his own young," explains Pearson. "But I could still see God blessing his life.

"[Then], I had a crisis of faith. What I had known growing up to be the presence of God left my body. And I wigged out, because it was all I had known from a very young age."

So Pearson, who had already embraced "the devil's music," falling in love with early U2 and the ethereal guitar sounds of My Bloody Valentine and other British shoegazer bands, began to channel the spirituality inherent in his own music to fill this sudden void of faith. "That's all I write about, because it consumes my mind."

Part two of the Lift origin finds Buck as a ranch hand, shoveling manure under the hot sun on a ranch outside of Denton.

"I started writing these songs," says Pearson, "and it all sort of led to Texas wanting a place in the final destination. So I took her for my own, and we made that the final resting place. The end of the line so to speak.

"Texas is a really strong image, that sort of pride in itself without really knowing why. It fit really well with what I wanted to do with metaphors and Jerusalem and that sort of last stand, the line in the sand."

This was the birth of the Lift to Experience universe, a place where Jim Bowie makes his final peace with the Lord as he totes his rifle on the eve of the Alamo's last stand. This mythos lives in all its glory on last year's 2-CD debut The Texas-Jerusalem Crossroads, where Pearson's preacher blood and love of the scripture leads to such eloquent lines as, "So begins the exodus to the land of the unclouded day." (See review at austinchronicle.com/issues/dispatch/2002-03-15/music_phases15.html)

"It's just really ingrained, the language of the Bible," says Pearson. "The stories are some of the greatest ever written. Men wanting to rape angels. Daughters too drunk to procreate. God redeeming man by killing his son."

Yet before the theology gets too thick, Pearson's lyrics continually remind us that he's "Just a stupid ranch hand in a Texas rock band, trying to understand God's master plan."

Ludicrous, perhaps, but by the time you've neared that promised land, the struggle becomes so engaging that you're ready to take a deep plunge straight into the roaring Rio Grande. "This God damned cross, crushed into my chest, I'm still doing my best," agonizes Pearson on the magnificent "Falling From Cloud 9."

You can feel Buck's agony as he wrestles with an immense spiritual dilemma while a maelstrom of distortion and cacophonous drums surround him on all sides, ratcheting up the emotional intensity to almost unbearable levels.

Pearson formed Lift to Experience with bassist and longtime friend Josh "Bear" Browning shortly after the preacher's son returned to Denton, near where he'd grown up, in 1996.

They released a self-titled EP the next year, and early in 1998, recruited Andy "the Boy" Young, a fellow son of a preacher man and a trained jazz drummer whose unbridled ferocity completed the equation, giving shape to the tension lurking within the songs. Soon, they had all the material they needed for The Texas-Jerusalem Crossroads. Though they had won a devoted local fan base, they knew they were onto something bigger. What good is a sermon if you don't have a congregation?

Enter the Cocteau Twins. Ex-Twins Robin Guthrie and Simon Raymonde, owners of Bella Union Records, a hip British label that's home to the Dirty Three and Departure Lounge, were tipped off to Lift by L.A.-based dream-popsters the Autumns. Bella Union already had a label showcase planned for SXSW 2000, and after hearing a tape of the Denton trio's music, Guthrie and Raymonde were eager to see them live.

Lift set up a nonsanctioned showcase at the now-defunct Pato's Tacos, scene of more than one underdog SXSW success story. After the band played an impressive set through a violent thunderstorm, Guthrie and Raymonde immediately asked to put the record out.

Lift quickly began gathering a buzz in the UK, and within six months of the album's spring 2001 release, the band had played the Reading and Leeds festivals and met their musical heroes in My Bloody Valentine's Kevin Shields and Swervedriver's Adam Franklin, both of whom attended the group's first headlining show in London, "along with half the British press."

"You can't really ask for anything better than what has happened to us in the past year," says Lift drummer Young, whose friendship with Shields may result in a slot on Shields' planned solo follow-up to Loveless. Meanwhile, the esteemed Franklin was last seen hawking Lift T-shirts on the Dentonites' recent European tour.

-- And Texas Is the Reason

The Lone Star State has always been a big hit overseas, and so has the cowskull, Lift's mascot.

"You don't even think about it until you've got some British kids coming up after the show and touching it, just freaking out," says Young.

"I had problems getting it through customs in England and France," says an amused Pearson.

Yet while Europe dotes on them, Lift remains fairly anonymous back home due to Bella Union having no American distributor, and the band's overseas tour schedule. This will be their first major domestic tour. Pearson is also wary of Americans' tendency to slap the "Christian band" tag on any group that addresses faith.

"Europeans are surrounded by Christian elements," notes Pearson. "You're looking up at Michelangelo's chapel, and you don't have to believe in the angels to be moved by it. We have no desire to convert anyone; we're just trying to make good art."

And then there's the album cover, a spoof on New Orleans hip-hop label Cash Money and their gaudy designs. "We needed the record to have a cover that's as narcissistic as it possibly could be," says Pearson. "With what we're trying to do, it's very hard to get to those places. We need to sort of knock back the defenses that any man has to get to that place."

Sometimes Lift to Experience's larger-than-life tall tales become captivating rallying cries, as on the eerily pre-9/11 anthem "These Are the Days," a bouncy number thick with apocalyptic Revelations imagery. Suddenly, amid the brimstone, a clearing appears, and Pearson proclaims, with 100% conviction, "We're simply the best band in the whole damn land ... and Texas is the reason."

Lift to Experience plays the Mercury Thursday, June 6, with the Devics and Tia Carrera opening.