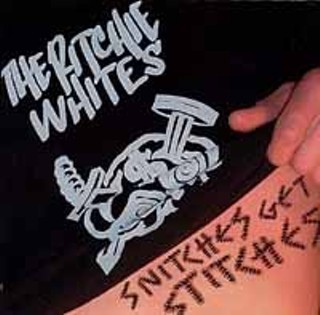 Snitches Get Stitches (TKO) Composed of ex-members from Los Tigres Guapos, the Motards, Bulemics, Teen Cool, Secret Lovers, and Reclusives, this Austin fivepiece throws their hat into the punk-seasoned rock & roll arena with their energy-oozing debut. From potent opener "Portions of the Whole" and the tightly wrapped "Pimp Killer" to closer "Shock Theatre," Snitches Get Stitches is full of cinderblock guitars, 55-gallon drums, warehouse bass, and sneering vociferous vocals, all delivered with the kind of oomph that landed the band an opening slot for Slaughter & the Dogs. Packed with 12 toe-tapping originals -- like the done-wrong "Happy" and the existential crisis of "Human Bondage" -- Snitches distinguishes the Ritchie Whites from other like-minded heavy outfits thanks to the entire group contributing vocals. "Honky Tonk Satisfaction" implies that the band's been soaking up Motörhead, and "Bush League Rock Star" is a tribute to the Ramones. Closer "Shock Theatre" demonstrates that the band can successfully deviate from the standard punk formula by adding sonic texture, an avenue they should explore more in the future. Embracing the punk aesthetic of short bursts of volumized music, half of the songs are under two minutes, hitting like a switchblade -- sharp, quick, and very much to the point. So short, in fact, that the entire album could nearly fit on one album side. Which is about the only critique a hard rockin' fan could have. A request for more.