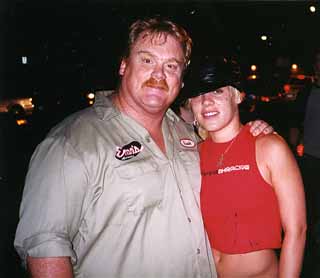 Boy, I leave town for a couple of days and the celebrities descend on Austin like buzzards circling a napping Bob Hope. Seems everyone spotted a star somewhere, from Minnie Driver at Flipnotics (the Flips gang reports she stopped by for a cool beverage on their deck last Saturday) to George Michael at Oilcan Harry's (okay, this one is a bit suspect ...). The Emo's gang was feeling in the Pink a couple Saturdays ago, when the lavender lass stopped by to play some pool and Recover a bit before playing her show at the Austin Music Hall. This, of course, was a mere couple of days after Gwen Stefani and the No Doubt crew had been hanging at the club. They'd been up the street at Stubb's checking out Nick Cave & the Bad Seeds, then tromped down to Emo's, where their tourmates the Faint was playing before both bands' Austin Music Hall show the next night. Those kids were left alone, but unfortunately, since this isn't old Austin anymore, a number of teenyboppers assembled to gawk at the Pink one's tequila shots intake. This caused her to retreat inside for the Li'l Cap'n Travis show, where Jeff Johnston obliged Pink's desire for anonymity by being thoroughly unaware of who she was. Unfortunately things went a bit less smoothly the next night, when Pink attempted to enjoy a post-gig visit to Elysium, and had a couple of misguided gothlings shrieking and moaning that M!ssundaztood was harshing their buzz. Finally, the Emo's staff, who'd been comped to the Music Hall show, unlocked their closed club and ushered her and her entourage in from the Elysian field so they could get a few quiet moments before finishing up with a late showing at Katz's.

Packed crowds at the 710 and the Continental Club last week didn't seem to mind much, but Hank Williams III had a rough time with his shows in Austin, and the word out is that as a result he's now searching for a few good men. Continental Clubber Dianne Scott points me to his Web site, where Li'l Hank declares, "Well, if anyone knows a good stand-up bass player for the country stuff and also a guy that can play electric bass for the hard rock stuff send your info to: Att: Bass Player, Gold Mountain, 2 Music Circle South, Suite 212, Nashville, TN, 37203. Same goes for a fiddle player, [who] must have a good amp and an electric fiddle. And the fiddle player is only needed for the country set." Adds Scott, "I guess the unemployment rate just went up in Texas, as [Hank's] temporary fiddle player was from Austin and his bass player was from Houston. I hear Scott Hinkle (David Allen Coe, Dale Watson, etc.) may be in the running for the bassist spot." If things were nutty for the littlest Hank, you know they had to be totally bugfuck for Appalachian madman Hasil Adkins. Sez Scott: "His reputation as unpredictable 'n' eccentric fits him to a T. He took his time going onstage and then played a half-hour set before deciding it was too hot onstage, and leaving the building, never to return. Hahahahaha! Everyone was literally left standing around going, 'What's going on!? Is he coming back? Is he taking a break?' We had no answers. But," she continues, "the crowd loved him while he was up there, although I have to admit that it didn't bother me that he only played 30 minutes. In fact, 10 might have been enough for me. Blasphemy perhaps, but true nonetheless." So, Dianne, when's the Legendary Stardust Cowboy coming?

Crash Landings on This Mortal Plane

Taking a more serious tangent off the subject of Hank III and his sidemen, it's my sad duty to report that Michael McCanless, fiddle player in HWIII's Damn Band and Assjack, is on leave from the band since he was diagnosed with cancer a few weeks ago. The Continental Club will be holding a fundraiser for his medical costs on June 27, with Gina Lee & Her Texas Three, Alvin Crow, D.B. Harris, Erik Hokkanen, Dale Watson, Jesse Dayton, and Chad Thomas confirmed to perform so far. If you are interested in more ways to help Michael out, check out the "Fuck Cancer" page for ordering info on a T-shirt or video from his solo show at Flipnotics last February, or send a get-well card to: Michael McCanless, PO Box 128392, Nashville, TN 37212. As a matter of fact, it seems the dead and unhealthy are populating this week's column in higher numbers than the superstar contingent. For instance, numerous Capital City scenesters will miss Klaus Tschernutter, who passed from cancer recently. The music buff was such a regular in local clubs that he earned the title "the Austin Austrian," aiding many local bands in getting gigs and exporting their Texas culture to Europe. A celebration with many of his friends happens next Wednesday at the Continental, wherein the artists performing include Darin Murphy, Troy Campbell, Eric Blakely, Whitey Ray Huitt, Shelley King, Scott Carpenter, Jon Dee Graham, Walter Tragert, Reckless Kelly, George DeVore, Thad Beckman, and Delta Roux. Another Continental Club staple, Steve Brown, former owner of One World Music, died from a heart attack last Monday afternoon. His longtime girlfriend, comic Jana Williams, asked that we pass this sad news on to Chron readers. Then there's former Stretford leader Carl Normal, who was recently hospitalized not once but twice for complications arising from an emergency (and uninsured) appendectomy. He's better now, but is facing enormous medical bills, so his friends are hosting a benefit, with all proceeds going to help him get out of debt. "Back to Normal: A Night of Music to Benefit Carl Sephton (aka Carl Normal)" takes place at Paul Oveisi's new Six of Clubs, 507 Sixth Street next Thursday, May 30, 6pm-2am. Britt Daniel, Black Before Red (featuring Stretford's Mike Macicak), the Afreakins, In Limbo, Mandy Mercier, Dirty Mary, Gloria Chain/Huey Esquire, the Blue Moon Messiahs, and the Marshall Fucker Band will rock & roll. Guests are not required to dress British. However, Katnip from Satan's Cheerleaders writes to notify us about a benefit that the soul sisters of ol' Scratch are hosting for Jeremy Soules, who was assaulted about a month ago and underwent emergency brain surgery to remove a blood clot. The ex-Bob Popular bar manager has no health insurance, and his medical bills have exceeded $30,000. The benefit is this Sunday at Room 710, with the Flametrick Subs and Satan's Cheerleaders, Drug Cow, the Oklahomos, and Chop Shop scheduled to play. The benefit has a hospital theme, so all who attend are encouraged to dress as doctors, nurses, or patients. Or, if you're Carl Normal, just bring along your appendix in a jar.

The Butthole Surfers' new outtakes compilation Humpty Dumpty LSD should be in stores June 10, courtesy of the band's revived private label Latino Buggerveil, and fans of the band's less danceable material should rejoice in the streets. Drummer King Coffey says there will be a second volume of material from the vaults to follow sometime next year, but adds that a third or even more would depend on how much decent material the band decides they have. The next release on LBV will be the first two BHS EPs, Brown Reason to Live and Pee Pee the Sailor, on one CD, with a couple of bonus tracks, possibly due for an October release. But wait! Aren't the Surfers a major-label recording act these days? What's up with the self-releases? "While we haven't officially been given our walking papers," Coffey postulates, "I think Hollywood is 'disappointed' with the sales of Weird Revolution and probably won't ask us back. Then again, the record has just now been released in Germany. Maybe we'll be bigger than Heino." King confesses that among the Butts' options, Latino Buggerveil is "looking better all the time. We can make horrible noise, have zero pressure to make a 'hit,' and no one will lose their job if the record doesn't have a song that makes MTV rotation." For now, King decrees, the Buttholes are focusing all their energy on the band's upcoming tour, which includes a July 20 date at Emo's, and Japanese dates. "We need to start working on new material," he admits, "but it's more fun to play live, so who knows?"