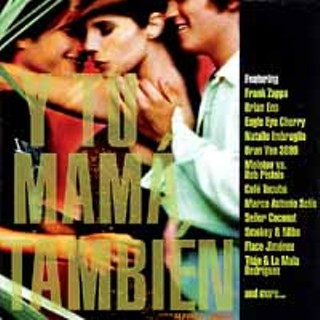 (Volcano) Summer cinema has just swung into a neighborhood metroplex near you, but already Y Tu Mamá También is nearly six weeks into its subtitled impression of a bona fide indie blockbuster at the Dobie. What better escapade from CenTex sunstroke, after all, than a steamy two-reeler about a pair of randy Mexican teens and their beach excursion with lovely Luisa, Madrid's own version of Señorita Robinson? Besides sexo, drogas, y roc y roll, that is. And hilarity. Since no road trip is complete without a kilometer-killing soundtrack, this pimp-mix disc to Alfonso Cuarón's delightfully mischievous cuming-of-age (skin) flick is most definitely the boleto. Molotov, Plastilina Mosh, Café Tacuba, Titán -- la crema of today's Rock en Español movement -- supply a station wagon's worth of rhythmic ammo to the film's boys club commandments of Los Charolastras, Julio and Tenoch's side-splitting code of honor. What of cuts by Eagle-Eye Cherry and Natalie Imbruglia? Like the somewhat intrusive narration of its cinematic counterpart, the CD comes with a mouthful of backstory. Take "Cold Air" by Imbruglia: "Two years ago, the video from 'Torn' broke Julio's heart. 'If that's how sirens sing, let my ship sink,' he said ... Natalie is one of the top 10 megababes of the Charolastras." Señor Coconut's cha-cha-cha-ing "Showroom Dummies," the robotic camp of Bran Van 3000's "CD Shopping," Flaco Jiménez's rad trad "La Tumba Sera el Final" -- Charolastras know how to party. There's even Eno ("'By the River' is Daniel's favorite song ..."), and Zappa ("It was listening to 'Watermelon in the Easter Hay' that Julio excitedly exclaimed: 'The truth is cool.'") So's your mama.