The off, off, off Broadway return of "Border Radio" 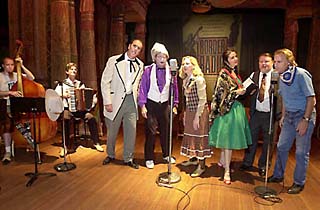 If you had happened upon a small South Austin studio at approximately 7:45 last Friday evening, you would have played witness to an agitated gentleman urging the men in the audience with declining virility to let him insert goat glands into their "personal equipment."

"The goat glands act like a battery charger," explained Dr. Brinkley as he gyrated around the stage. "They can make a man the ram what am with every lamb."

That's what this weekend's performances of a new musical, Border Radio: A Nuevo Vaudeville Documentary Performance, are all about. Thankfully, that's not the only thing they're about.

To our unrehearsed ears, the phenomenon known as border radio requires a little explanation. In 1987, Bill Crawford and Gene Fowler, two Austin writers, published Border Radio: Quacks, Yodelers, Pitchmen, Psychics, and Other Amazing Broadcasters of the American Airwaves -- recently reissued by University of Texas Press -- that describes the downright oddball radio culture the Texas-Mexico border nourished from the early Thirties until the mid-Eighties.

How weird was it? Take the case of Dr. Brinkley, who left Kansas, where his medical license had been revoked, to start his own radio station just the other side of the border. A frequency so powerful, in fact, that it interfered with radio reception in the northern reaches of the United States. What those listeners heard on XER were the august physician's claims that he could cure men experiencing a lagging sexual drive by inserting goat glands down there.

The good doctor, who liked to be called just that, "Doctor," once commissioned a biography about himself claiming that he made his miraculous goat gland discovery after a Kansas farmer complained that he was a "flat tire" who couldn't seem to impregnate his wife. Soon, the two men had drifted into the usual country talk about farming and livestock. That's when Doctor told the farmer, apparently in jest, that his client "wouldn't have any trouble if you had a pair of those buck glands in you." To the farmer, this was no joke.

Said farmer began insisting that Doctor do just that, even threatening to ruin the medical man's reputation by driving away potential patients if Brinkley didn't goat gland him. For $150, then, "in secret in the middle of the night," as Crawford and Fowler write, Brinkley did just that. When the farmer's wife gave birth not long afterward, the couple named their child Billy "in honor of the assistance we had received from our four-footed friend."

Advertising his services much more effectively with a powerful border-bound radio transmitter, Brinkley eventually established his practice there because he could. Other quacks and misfits joined him, broadcasting their astrological predictions and strange spiritual and medical cures while hawking their wares over the most widely heard radio stations on the continent.

There was Rose Dawn, who ascertained listeners' fortunes and horoscopes on the air and called herself a Patroness of the Sacred Order of Maya. She offered help -- self-help -- to those willing to see the light shining from her soul -- for only $4.98. Radio evangelists especially flourished on border radio, since such stations were the only ones allowed to solicit donations. They sold prayer cloths and autographed pictures of Jesus Christ. These are the characters preserved in Border Radio.

Some of these border radio personalities -- Brinkley and W. Lee "Pass the Biscuits, Pappy" O'Daniel are the most prominent -- used the medium to parlay, or attempt to parlay, a political future for themselves.

"Radio waves pay no attention to lines on a map," Brinkley liked to say, and the United States government knew it. The U.S. was essentially powerless to curtail the radio waves being blasted northward from the border, because the Mexican government was only too happy to protect the new powerful stations. Previously, the U.S. and Canada had carved up radio transmission rights between the two nations with no consideration that Mexico might want a piece of the action. Thus, a gaggle of evangelists and quacks working the border illegally (in the eyes of the U.S. government) instituted a variety of techniques now considered standard.

"In terms of politics -- guys like Brinkley and Pappy O'Daniel -- you can trace, say, Ronald Reagan right back to them," says Fowler, who's always had a soft spot for "the odd detritus" of American society. "They were some of the first masters of mass communications to use that medium to attempt to further political careers.

"In advertising, stuff like the Home Shopping Network and QVC can be traced back to the advertising styles on border radio. Then of course there's religion. I think they influenced the electronic church of the last two or three decades enormously, because they were pretty much the only game in town preaching on the air and soliciting donations.

"Plus, they allowed all sorts of health care programming with Dr. Brinkley going on and on with his goat gland and prostrate lectures, and Norman Baker's cancer treatments, and all the different medicines they pitched on those stations. They had some kind of influence on the alternative medicine of the last few decades."

Although advertising is one of the looming legacies of border radio, so is the music its programmers broadcast. Fowler interviewed country legends Hank Thompson and Webb Pierce for the Border Radio book.

Then there was Wolfman Jack, the outré deejay from Brooklyn who, as the authors explain, was known to the Japanese as the Emperor of Pleasing Graciousness and to Germans as the Laughing Chancellor of Comedy. In the early Sixties, his "late-night howls, fang-toothed wit, and heart-pounding party music" filled the airwaves with ever-increasing outrageousness.

"Wolfman Jack sold an awful lot of alternative record packages," explains Crawford. "What would be alternative radio packages back then? He sold rhythm & blues packages that had Howlin' Wolf, Lightnin' Hopkins, Muddy Waters, and he'd sell those record packages over the radio before that wild R&B sound was popular. That was about the only place people could buy them, especially white kids who were in small towns. They'd send away for these wonderful packages."

Several lines of dialogue from the Border Radio play indicate one reason why Crawford and Fowler are hoping to popularize border radio by producing the musical: to remind us that radio wasn't always a monotonous bore. Early in Border Radio, Crawford tells the audience, "If you've turned your radio on much in the last 10 to 20 years, you've probably noticed that automated monotony has taken over the airwaves." To which Fowler responds, "Prolonged exposure to the medium's predictable blandness has led to documented cases of mass sensory deprivation."

"Our dream would be to take Border Radio on the road," says Crawford, "and play all the smaller theatres, the smaller towns -- Bastrop, Lockhart, Uvalde -- where the people would remember border radio. Also, I think we're probably the only authors of a serious work of nonfiction, a serious work of history, that have actually turned it into a musical, and we not only wrote it, we also act and perform and kind of even sing in it. I would love to see Robert Caro do that with his Lyndon Johnson books."

Border Radio: A Nuevo Vaudeville Documentary Performance will be performed Friday, May 10, and Saturday, May 11, at the Scottish Rite Theatre (207 W. 18th). On May 10, the performance begins at 7pm with a panel discussion featuring Texas writers H.W. Brands, David Lindsey, and Bud Shrake, and a reading by Tom Doyal. Proceeds benefit the Austin Public Library Foundation. On Saturday night, the Border Radio performance begins at 8pm. Proceeds that night benefit Disability Assistance of Central Texas. $10 suggested donation both nights. Seating is on a first-come, first-served basis. Guitarist David Biller, accordionist Mike Maddux, and bass player Ryan Gould of Shorty Long will accompany the performance.