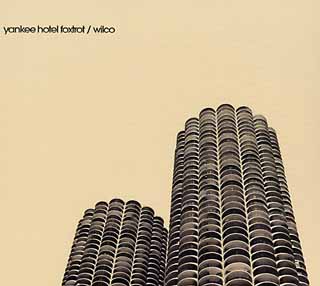 Yankee Hotel Foxtrot (Nonesuch) With the much-publicized dropping of Wilco by Warner Bros. last year there was always the possibility that the story behind Yankee Hotel Foxtrot, the album that led to said dropping, would overshadow the disc itself. And a cursory listen might not do much to alleviate that prospect, because the only thing that comes out of the album on the first couple of passes through is that: A) it makes its darkish predecessor Summerteeth sound like an 'N Sync album by comparison; and B) frontman Jeff Tweedy needs to be under a suicide watch, not in a recording studio. But Net nerds and industry insiders who managed to obtain copies of Yankee Hotel Foxtrot late last summer when the rumored rift between band and label became reality can testify that the delay could be the best thing to happen to the album. It needs the time. Stripped of most melody, the songs' minimalist acoustic strums are accompanied instead by an array of studio-noodling textures. Initially, nearly half the songs ("War on War," "Kamera," "Ashes of American Flags," "Poor Places") sound unfinished, but after awhile -- a familiarity period if you will -- it becomes clear that these songs are not only fully realized, they're damn near brilliant. Sure, it's a more modest album, but that only makes it more elegantly befitting of its subject matter as Tweedy paints tiny portraits of American curiosities in which he typically opts for the small and strangely familiar over the trite. By subverting his own moderate success and abandoning many of the formulae that made previous Wilco albums enjoyable, Tweedy has both left behind and resuscitated the Americana genre he helped create.